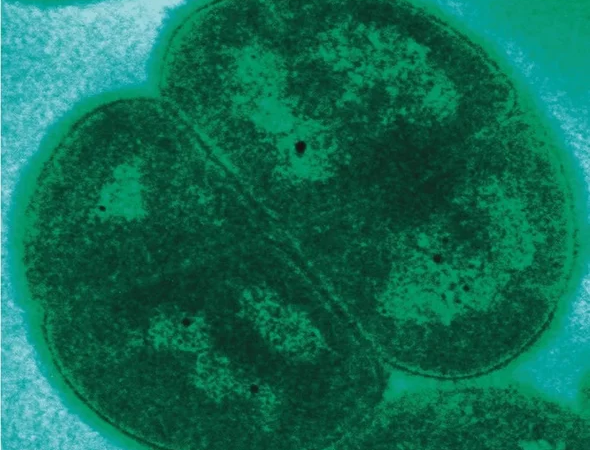 One of Earth’s toughest microbes could survive on Mars, lying dormant beneath the surface, for 280 million years, new research has shown. The findings increase the probability that microbial life could still exist on the Red Planet.

Deinococcus radiodurans, nicknamed “Conan the Bacterium,” is one of the world’s toughest microbes, capable of surviving in radiation strong enough to kill any other known life-form. Experiments have now shown that if Conan the Bacterium or a similar microbe existed on Mars, it could survive 33 feet (10 meters) beneath the surface, frozen and dried out, for 280 million years.

In a study led by Michael Daly, who is a professor of pathology at Uniformed Services University of the Health Sciences in Maryland and a member of the National Academies’ Committee on Planetary Protection, scientists tested half a dozen microbes and fungi—all “extremophiles” able to live in environments where other organisms die—to see how long they could survive in an environment that simulated the mid-latitudes of Mars. During the experiments, organisms faced temperatures as low as minus 80 degrees Fahrenheit (minus 63 degrees Celsius) and exposure to ultraviolet light, gamma rays and high-energy protons mimicking the constant bombardment of Mars by solar ultraviolet light and cosmic radiation sleeting down from space.

Conan the Bacterium was the clear winner. The researchers found that Conan the Bacterium could absorb as much as 28,000 times more radiation than what a human can survive. This measurement allowed Daly’s team to estimate how long the microbe could survive at different depths on Mars.

Previous experiments, in which Conan the Bacterium had been suspended in liquid water and subjected to radiation like that found on Mars, had indicated that the microbe could survive below the surface of Mars for 1.2 million years.

However, the new tests, in which the microbe was frozen and dried out to mimic the cold and dry conditions on Mars, suggested that Conan the Bacterium would be able to survive 280 million years on Mars if buried at a depth of 33 feet. This lifespan is reduced to 1.5 million years if buried just 4 inches (10 centimeters) below the surface, and just a few hours on the surface, which is bathed in ultraviolet light.

Mars’ environment 280 million years ago was pretty much the same as it is now—cold and dry—and you have to go back much further to find a time when it was warmer and wet and might have allowed hypothetical Mars life to establish itself in the first place. Daly acknowledges this complication, but thinks there are ways life could have found environments in which to proliferate since Mars’ dramatic climate change.

“Although Deinococcus radiodurans buried in the Martian subsurface could not survive dormant for the estimated 2 to 2.5 billion years since flowing water disappeared on Mars, such Martian environments are regularly altered and melted by meteorite impacts,” he said in a statement. “We suggest that periodic melting could allow intermittent repopulation and dispersal.”

Consequently, future missions to Mars looking for life might want to target large craters younger than 280 million years. Gale Crater, which NASA’s Curiosity rover is exploring, is 3.8 billion years old; Jezero Crater, where the Perseverance rover is working, is likely a similar age. However, younger craters do abound; for example, Tooting Crater, which is 17 miles (28 km) wide in Amazonis Planitia west of Olympus Mons, is thought to be only hundreds of thousands of years old.

The research also determined why Conan the Bacterium is so resistant to radiation. The scientists found that chromosomes and plasmids, which carry genetic information, in the microbe’s cells are linked together, which keeps these structures aligned and prevents irradiated cells from breaking down until they can be repaired.

This durability means that future missions, such as the European Space Agency’s Rosalind Franklin rover that will dig deep into Mars in search of microbial life, could well find Conan the Bacterium’s Martian cousin, should it exist.

Sample-return missions could even bring these microbes back to Earth; experiments on the International Space Station have even confirmed that Conan the Bacterium can survive for at least three years in space. However, we’ll need to be careful not to contaminate Earth with Martian microbes.

And future Red Planet missions, both crewed and robotic, also need to be wary of contaminating Mars with Earthly microbes.

While robotic missions to Mars are sterilized before launch, the sterilization process is not perfect and some microbes can still hitch a ride to the Red Planet. If human beings visit Mars, they will bring many more microbes with them, which could escape out into the Martian environment and either destroy the native microbial biosphere or confuse experiments looking for life on Mars.

As experiments such as this increase the chances of indigenous life existing on Mars, scientists will need to ask additional important questions about how we can protect any potential life that we find there.

The study is detailed in a paper published Tuesday (Oct. 25) in the journal Astrobiology.