Black Knight UFO Satellite Explained…It’s NOT 13,000 Years Old! It’s NOT Even A UFO 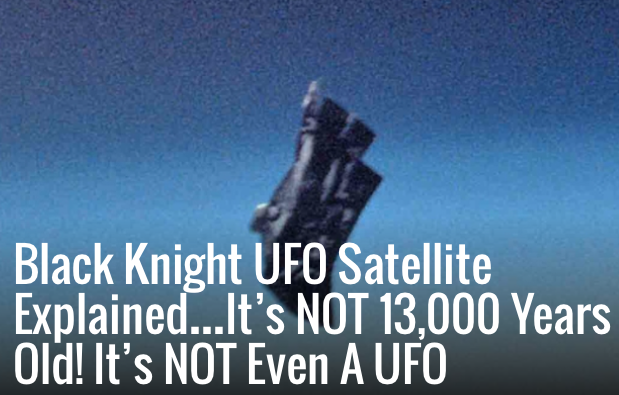 Armchair UFOlogists beware! This article will upset a lot of people.

This whole black knight UFO satellite thing has gotten totally out of hand. For some reason which I can not fathom many, many people purposely and intentionally want and can believe anything. Facts do not sway them and anything that substantially threatens their topsy-turvey UFOlogical worldview is instantly labelled a conspiracy. Labeling anything with the conspiracy label without doing your do diligence is the height of intellectual laziness. This whole ‘Black Knight’ subject was explained to 100% satisfaction to the people that really know…the scientific community and anyone who has the wherewithal to check the publicly available NASA archive. But to some people UFOlogy has become a religion. None of those pesky facts for them…belief is all they need even if it provably wrong. It appears especially if it is provably wrong.

UFOlogy MUST sway and discourage this religiosity of the UFO subject. It helps no one, confuses most, and irritates to no end people that know better. Faith in anything is a bad thing. It robs a person of the burden of thinking too much and festers lies and deceit.

UFOlogy and UFO’s are REAL…no faith required. The scientific facts all point to a Universe teaming with life. Science is our only hope to validate and legitimize the study of such a paradigm shaking subject.  People have to learn to critically think about what they believe. In the end what you believe does not matter, it is what you KNOW that counts.

So what is this so called Black Knight…

Video and photographic images has arisen from armchair UFOlogists who claim they have further proof of the mysterious Black Knight satellite. Alien researchers have been calling the Black Knight one of the most convincing pieces of evidence for the existence of intelligent extraterrestrial life for the past 20 years, while some claim it has orbited Earth for at least 13,000 years.

The above video claims to conclusively prove the ‘Black Knight’, as photographed in 1998 NASA images, was nothing more than a satellite thermal blanket lost by the crew of the Endeavor space shuttle as they worked on the developing the International Space Station (ISS).

In the above video from NASA of the Endeavor mission which shows a thermal blanket on the ISS. The same blanket is then seen being dropped by the crew as it tumbles away into space. It is easy to identify that the blanket as being exactly the same shape as the ‘Black Knight’ in the 1998 pictures seized on by tin-foilists and explains that the object only appeared to change shape because it was turning as it fell away.

After releasing the pictures in 1998, NASA said it was a thermal blanket, but it did not stop a wave of branding it a huge cover up.

The legend of the alien satellite seems to have then been retrospectively dated back to 1899 when Nicola Tesla announced he was picking up radio waves coming from space, prompting people to suggest something alien was out there.

In 1954, US state newspapers carried quotes from Donald Keyhoe, a retired naval aviation major and UFO researcher, claiming the US Air Force had detected two satellites orbiting Earth, despite none yet being launched from our planet. Time then ran a 1960 piece, following the launch of satellites from Earth, stating that the US Navy detected a dark object, possibly a Soviet spy satellite, with a highly irregular orbit.

The myth developed in 1963 when NASA astronaut Gordon Cooper was reported as saying he had seen the ‘Black Knight Satellite’ while in space, but there was a media blackout upon his return and the US space agency allegedly put it down to cosmic hallucinations.

It has been reported that a decade later in 1973, a researcher from Scotland, Duncan Lunan, looked back at the Norwegian scientists’ data from 1928, before claiming the “messages” suggested the ‘Black Knight’ was sent by aliens from Epsilon Boötis, as a welcome message to Earth 12,600 years ago.

Many skeptics claim the legend was retrospectively created after the 1998 pictures emerged, with the preceding odd events weaved into the story to make it more convincing.

They insist research shows that in 1954 Mr Keyhoe had been promoting a UFO book and the articles had been written in a tongue-in-cheek fashion by the papers.

A follow-up, but less widely read, article in Time also confirmed that the strange satellite had in fact been the remains of an Air Force Discoverer satellite that had gone astray, they found. There are reports that Mr Cooper, although maintaining he saw a number of UFOs in space, never claimed to have seen the ‘Black Knight satellite’ on that mission or at all.

Mr Lunan is also later reported to have denied suggesting any alien satellite had its origins 12,600 years ago and that his conclusion that the noises were a star map were from unscientific methods. Despite this video, many UFO researchers refuse to believe the fabled ‘Black Knight satellite’ could be just a thermal blanket, insisting, it is a craft of solid construction.

Not sure how the true believers would know that since the shape and dimensions of an ISS thermal blanket is unknown to them. They just know. These thermal blankets are custom formed to fit over the heavily utilized and odd shaped ISS components for a custom fit. That is exactly what is seen.

So a thermal blanket (which can be up to 10 cm’s thick) that is the exact shape and size as the alleged black knight satellite is discarded or lost from the ISS. ISS cameras catch it slowly meandering away…but no it’s a 13,000 year old alien probe obviously. The apparent darkness of the object is due to how cameras work. To get the right exposure to show the planet underneath which is very bright will give the illusion of the object in the foreground being grey or black. It is all about exposures.

This object no longer lingers in the sky. It would have burned up shortly after it was lost. As soon as it experienced drag from the fast moving atmosphere it would be incinerated. Reentry into the Earths atmosphere is rough.

Please my dear reader do not assist in the religiosity of UFOlogy. This so called mystery is no mystery at all.

Tesla had nothing to do with this at all. It is well known that what Tesla picked up was the first interception of weak signals from what is now called a pulsar. In the modern form of delusional UFOlogy whenever you see claims that Tesla was involved at all you should know instantly that it is bullshit. Tesla was amazing in what he actually attained in his life and he is godlike in what is claimed he has done. 95% of all claims involving Tesla are false. Tesla is used by clickbait artists in an attempt to legitimize their literary detritus.

Don’t fall for it. Peace.