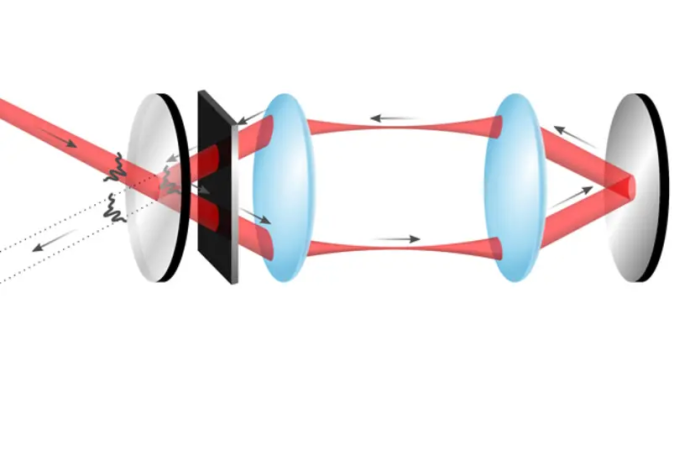 A beam of light prevents itself from escaping, allowing light to be perfectly absorbed.

If you want to use light efficiently, you have to absorb it as completely as possible. This applies whether the light is being used for photosynthesis – in which green plants transform light into oxygen and energy-rich organic compounds – or in a photovoltaic system using solar panels to convert sunlight into electricity. However, this is difficult if the absorption is to take place in a thin layer of material that normally lets a large part of the light pass through.

Now, research teams from the Hebrew University of Jerusalem and the Vienna University of Technology (TU Wein) have found a surprising trick that allows a beam of light to be completely absorbed even in the thinnest of layers.

They built a “light trap” around a thin layer using mirrors and lenses in which the light beam is steered in a circle and then superimposed on itself – exactly in such a way that the beam of light blocks itself and can no longer leave the system.

As a result, the light has no choice but to be absorbed by the thin layer. There is no other way out. This absorption-amplification method, which has just been published in the scientific journal Science under the title “Massively degenerate coherent perfect absorber for arbitrary wavefronts,” is the result of a fruitful collaboration between the two teams.

The approach was suggested by Prof. Ori Katz of Hebrew University and conceptualized with Prof. Stefan Rotter from TU Wien. The experiment was carried out in by the lab team in Jerusalem while the theoretical calculations came from the team in Vienna.

“Absorbing light is easy when it hits a solid object,” Rotter explained. A thick black wool jumper can easily absorb light. But in many technical applications, you only have a thin layer of material available, and you want the light to be absorbed exactly in this layer.”

There have already been attempts to improve the absorption of materials. For example, the material can be placed between two mirrors. The light is reflected back and forth between the two mirrors, passing through the material each time and thus having a greater chance of being absorbed.

To prevent this, one can use the wave properties of light in a sophisticated way.

“In our approach, we are able to cancel all back-reflections by wave interference,” said Katz.

Helmut Hörner from TU Wien, who wrote his thesis on this topic, noted, “In our method, too, the light first falls on a partially transparent mirror. If you simply send a laser beam onto this mirror, it is split into two parts: The larger part is reflected, and a smaller part penetrates the mirror.”

This part of the light beam that penetrates the mirror is now sent through the absorbing material layer and then returned to the partially transparent mirror with lenses and another mirror.

Yevgeny Slobodkin and Gil Weinberg, the graduate students who built the system in Jerusalem, explained, the crucial thing is that the length of this path and the position of the optical elements are adjusted in such a way that the returning light beam and its multiple reflections between the mirrors cancels out the light beam reflected directly at the first mirror exactly.

So the mirror, which used to be partially transparent, now becomes completely transparent for the incident laser beam. This creates a one-way street for the light. The light beam can enter the system, but then it can no longer escape because of the superposition of the reflected portion and the portion guided through the system in a circle.

As a result, the light has no choice but to be absorbed – the entire laser beam is swallowed up by a thin layer that would otherwise allow most of the beam to pass through.

“The system has to be tuned exactly to the wavelength you want to absorb. But apart from that, there are no limiting requirements. The laser beam doesn’t have to have a specific shape, it can be more intense in some places than in others – almost perfect absorption is always achieved.”

Rotter said, “The system has to be tuned exactly to the wavelength you want to absorb. But apart from that, there are no limiting requirements. The laser beam doesn’t have to have a specific shape, it can be more intense in some places than in others – almost perfect absorption is always achieved.”

He added, “The system has to be tuned exactly to the wavelength you want to absorb. But apart from that, there are no limiting requirements. The laser beam doesn’t have to have a specific shape, it can be more intense in some places than in others – almost perfect absorption is always achieved.”

Not even air turbulence and temperature fluctuations can harm the mechanism, as was shown in experiments conducted at Hebrew University. This proves that it is a robust effect that promises a wide range of applications. For example, this mechanism could even be well suited to perfectly capture light signals that are distorted during transmission through the Earth’s atmosphere. The new approach could also be of great practical use for optimally feeding light waves from weak light sources such as distant stars into a detector.