UFOs have landed in Congress, where legislation addressing them will be considered 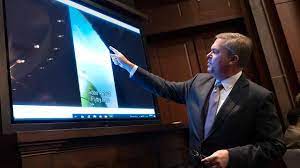 But let me run this through the universal translator for a moment. You know. Like the one they use on “Star Trek.”

What if I decoded that sentence to tell you that lawmakers are petrified about growing threats to the U.S. from UFOs?

Now do I have your attention?

For the first time in history, Congress is recognizing that unidentified aerial phenomena — or “UAPs” as they’re now called — may exist. And, if Congress approves the intelligence bill, lawmakers will mandate the creation of a special government office to determine what’s terrestrial — and what’s extraterrestrial.

The truth may be out there. But you can’t find it without first filleting the otherworldly, legislative bill text.

Unidentified Flying Objects have stumped military pilots for decades. They defy physics. Perform impossible aerodynamic maneuvers against the wind. They zip around at staggering speeds.

That’s why lawmakers are compelling the military to unravel what we don’t understand.

“There are unexplained events out there,” said former CIA officer and Senate leadership intelligence adviser Ron Marks. “And if you can’t explain it, then, as a good intelligence person, you should analyze it to know what’s there and what’s not.”

Lawmakers have long been skeptical of whether the military and intelligence communities were fessing up about what they knew — or conceding what they didn’t know — about stuff that could be flying around overhead.

That’s why the House Intelligence Committee conducted the first hearing on UFOs in more than 50 years back in May.

“When we spot something we don’t understand or can’t identify in our airspace, it’s the job of those we entrust with our national security to investigate and to report back,” said Intelligence Committee Chairman Adam Schiff, D-Calif.

But the hearing may have created more questions than answers.

Military officials played two videos at the hearing. One depicted a UFO event that they were able to explain as a visual anomaly — thanks to night-vision goggles and recording equipment. The other episode remains a mystery. However, the videos shown at the hearing were challenging to decipher.

“Congress is responding to classified data because the unclassified data that we had all seen includes fuzzy images that are not very convincing,” said Avi Loeb, a theoretical physicist and cosmologist at Harvard University. “And I wouldn’t expect such a bill to be authorized unless there was much more convincing evidence, which I’m sure there is.”

There’s concern the military may be hiding something.

“I’ve always felt that it was the military attempting to, to some extent, disguise advanced programs that they were working on,” said Marks. “But there are some things that do need to be explained.”

Lawmakers also worry that if the technology isn’t emanating from the U.S. or outer space it could be the Russians or Chinese. And that could pose an even bigger threat.

Sen. Marco Rubio, R-Fla., the top GOPer on the Senate Intelligence Committee, suggested as much in 2020 during an interview with CBS.

“Frankly, if it’s something outside this planet that might actually be better than the fact that we’ve seen some sort of technological leap from the Chinese or Russians or some other adversary that allows them to conduct this sort of activity,” said Rubio three years ago. “That to me is a national security risk and one we should be looking into.”

This is why lawmakers and others who study the cosmos say it’s incumbent upon the defense and intelligence communities to identify the unidentifiable.

“The government is the organization that monitors the sky all the time for national security purposes,” said Loeb. “So, you would expect those people who have their day job to monitor the sky to find such objects first. We just need to figure out what these objects are.”

Loeb said the government isn’t a “scientific organization,” adding officials are worried about “national security.” He says that enhances the onus on the government to try to figure some of this out.

It’s one thing to have people in Roswell, N.M., back in 1947 see things or even have sightings in the mid-1970s after the release of “Close Encounters of the Third Kind.” It’s another thing for people to spot things today. Loeb says that’s why the government should be able to better explain some of the events.

“I think there is much better data now than there used to be decades ago. So, rather than worry about reports that took place decades ago that were not of high quality and that were anecdotal, now we have excellent instrumentation that was not available,” said Loeb.

At the springtime hearing, lawmakers said that there was still a bias inside the military. Navy and Air Force pilots feared their credibility was on the line when they reported seeing strange things in the skies. Rep. Andre Carson, D-Ind., who led the hearing, said some pilots worried that their superiors would describe them as “kooks.”

Ron Marks invoked resistance among government officials to fully investigate the assassination of President John F. Kennedy or explore the POW/MIA issue. While there’s far from anything conclusive, Loeb suspects that people resist possibilities that could shift established paradigms.

No one believed Nicolaus Copernicus and his idea that the Earth and planets revolved around the sun in the 16th century. He faced trials from the Catholic Church. Galileo was placed under house arrest for his beliefs.

“There is a stigma and there is some ridicule in discussing the possibility of extraterrestrials. But the point is, whatever it is … we should figure out what it is rather than ignore it,” said Loeb. “We should be open-minded because we may not be the smartest kid on our cosmic block.”

Congress must first approve the intelligence bill before anything happens. But just the existence of the language in this bill denotes a key shift in thinking about the unexplained.

Perhaps one small step that could become a giant leap when it comes to UFOs.