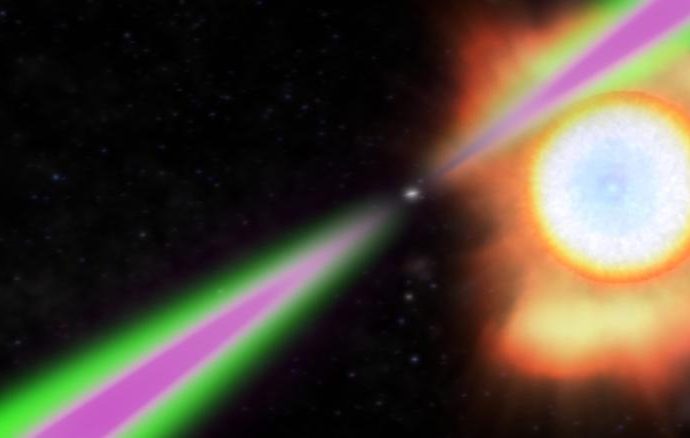 Astronomers have spied a “black widow” lurking in space 3,000 light-years from Earth, and it’s a record-breaking cosmic object.

Astronomers have spied a “black widow” lurking in space 3,000 light-years from Earth, and it’s a record-breaking cosmic object.

Called a neutron star, the dense, collapsed remnants of a massive star weighs more than twice the mass of our sun, making it the heaviest neutron star known to date. The object spins 707 times per second, which also makes it one of the fastest-spinning neutron stars in the Milky Way.

The neutron star is known as a black widow because, much like these arachnids known for female spiders that consume much smaller male partners after mating, the star has shredded and devoured almost the entire mass of its companion star.

This stellar feast has allowed the black widow to become the heaviest neutron star observed so far.

The Astrophysical Journal Letters published a study detailing the findings on Monday.

Astronomers were able to weigh the star, called PSR J0952-0607, by using the sensitive Keck telescope at the W. M. Keck Observatory on Maunakea in Hawaii.

The observatory’s Low Resolution Imaging Spectrometer recorded visible light from the shredded companion star, which glowed due to its high heat.

The companion star is now about the size of a large gaseous planet, or 20 times the mass of Jupiter. The side of the companion star that faces the neutron star is heated to 10,700 degrees Fahrenheit (5,927 degrees Celsius) — hot and bright enough to be seen by a telescope.

Neutron star cores are the densest matter in the universe, outside of black holes, and 1 cubic inch (16.4 cubic centimeters) of a neutron star weighs more than 10 billion tons, according to study author Roger W. Romani, a professor of physics at Stanford University in California.

This particular neutron star is the densest object within sight of Earth, according to the researchers. 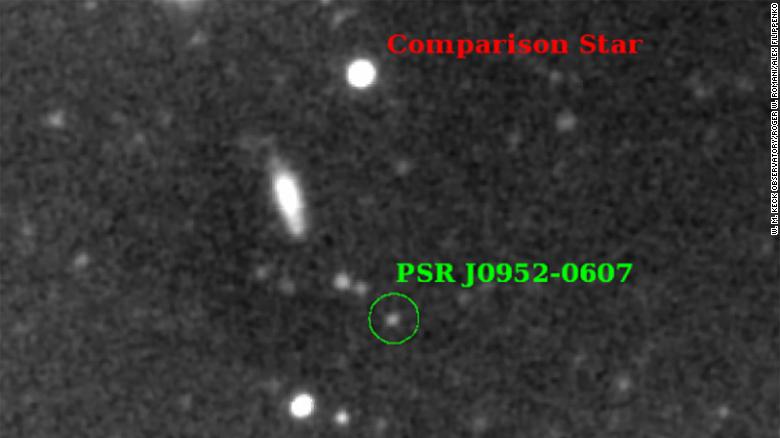 Astronomers observed a faint star (green circle) that has been stripped of nearly its entire mass by an invisible neutron star. The stripped star is much fainter and smaller compared with a regular star (top).

“We know roughly how matter behaves at nuclear densities, like in the nucleus of a uranium atom,” said study coauthor Alex Filippenko in a statement. Filippenko holds dual titles of professor of astronomy and distinguished professor of physical sciences at the University of California, Berkeley.

“A neutron star is like one giant nucleus, but when you have one-and-a-half solar masses of this stuff, which is about 500,000 Earth masses of nuclei all clinging together, it’s not at all clear how they will behave.”

A neutron star like PSR J0952-0607 is called a pulsar because as it spins, the object acts like a cosmic lighthouse, regularly beaming out light through radio waves, X-rays or gamma rays.

Normal pulsars spin and flash about once a second, but this one is pulsing hundreds of times per second. This is because the neutron star becomes more energized as it strips material away from the companion star.

“In a case of cosmic ingratitude, the black widow pulsar, which has devoured a large part of its mate, now heats and evaporates the companion down to planetary masses and perhaps complete annihilation,” Filippenko said.

Astronomers first discovered the neutron star in 2017, and Filippenko and Romani have studied similar black widow systems for more than a decade. They have been trying to understand how large neutron stars can become. If neutron stars become too heavy, they collapse and become black holes.

The PSR J0952-0607 star is 2.35 times the mass of the sun, which is now considered to be the upper limit for a neutron star, the researchers said.

“We can keep looking for black widows and similar neutron stars that skate even closer to the black hole brink. But if we don’t find any, it tightens the argument that 2.3 solar masses is the true limit, beyond which they become black holes,” Filippenko said.