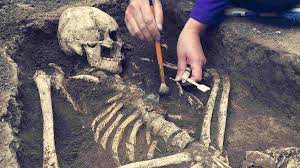 All of the Australopithecus-bearing cave sediments may be close to a million years older.

An innovative fossil dating method developed by Darryl Granger, a professor of earth, atmospheric, and planetary sciences in Purdue University’s College of Science, has revealed that multiple fossil remains of early human ancestors were found at the site of Sterkfontein Caves could be much, much older than previously thought.

In a study published Monday in the Proceedings of the National Academy of Sciences, a team of scientists used space particles to analyze bones in the Sterkfontein Caves, part of a major fossil site in northern South Africa known as the “Cradle of Humankind.”

Their findings pushed the age of some of these fossils back by more than a million years. This would make them older than Dinkinesh, also known as Lucy, the world’s most famous Australopithecus fossil.

For decades, paleoanthropologists and other scientists have studied Sterkfontein and other cave sites in the Cradle of Humankind to shed light on human and environmental evolution over the past four million years.

In 1924, Professor Robert Burns Young from Buxton Limeworks in the Taung district of the North West Province of South Africa sent two crates of fossils from Taung to Professor Raymond Dart of the University of the Witwatersrand in Johannesburg.

Dart immediately recognized the significance of a small fossil skill that belonged to a creature that was neither fully ape nor man. It represented one of our ancestors – an extinct hominin closely related to humans – which he called Australopithecus africanus, meaning “southern ape of Africa.“

Since then, thousands of fossils, including hominid fossils, have been uncovered at the “Cradle of Humankind,” a UNESCO World Heritage Site that comprises a variety of fossil-bearing cave deposits, including at Sterkfontein Caves. The latter was made famous by the discovery of the first adult Australopithecus, an ancient hominin, in 1936. Hundreds of Australopithecus fossils have been found there, including the well-known Mrs. Ples, and the nearly complete skeleton known as Little Foot.

The fossils are much older than we thought

Now, Granger and a team of scientists, including researchers from the University of the Witwatersrand in Johannesburg, South Africa, and the University Toulouse Jean Jaurès in France, have discovered that not only Little Foot, but all of the Australopithecus-bearing cave sediments date from about 3.4 to 3.7 million years old, rather than 2-2.5 million years old as scientists previously theorized.

“Sterkfontein has more Australopithecus fossils than anywhere else in the world,” Granger said in a statement. “But it’s hard to get a good date on them. People have looked at the animal fossils found near them and compared the ages of cave features like flowstones and gotten a range of different dates. What our data does is resolve these controversies. It shows that these fossils are old – much older than we originally thought.”

Now, there are a few ways to date cave sediments. In East Africa, where many hominin fossils have been found, the Great Rift Valley volcanoes lay down layers of ash. Scientists use those layers to estimate the age of a fossil. In the caves in South Africa, researchers don’t have the “luxury.” They usually employ other animal fossils found around the bones to estimate their age or calcite flowstone deposited in the cave.

The fallacy in the technique is that bones can shift in the cave, and young flowstone can be deposited in old sediment, making those methods potentially incorrect. A more accurate method would be to date the actual rocks in which the fossils were found. The concrete-like matrix that embeds the fossil, called breccia, is the material Granger and his team analyzes.

Granger and the team used accelerator mass spectrometry to measure radioactive nuclides in the rocks, as well as geologic mapping and a deeper understanding of how cave sediments accumulate to determine the age of the Australopithecus-bearing sediments at Sterkfontein.

The team also made detailed maps of the cave deposits and revealed how animal fossils of different ages would have been intermixed during excavations in the 1930s and 1940s, which, in all possibilities, would have led to decades of confusion about the previous ages.

“What I hope is that this convinces people that this dating method gives reliable results,” Granger said. “Using this method, we can more accurately place ancient humans and their relatives in the correct periods, in Africa, and elsewhere across the world.”

The age of the fossils influences scientists’ understanding of the living landscape of the time. It could answer several complex and pressing questions – the evolution of humans in a particular place, their fit in the ecosystem, and who their closest relatives are and were.

Dating the fossils at Sterkfontein back to their right age is a significant step towards solving the entire picture.