The Sun Is Made of Way More Metal Than We Thought 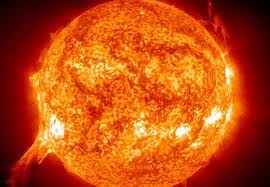 Astronomers have found that the sun is more metallic than we previously thought, potentially solving an astronomical mystery that scientists have grappled with for years.

The sun is Earth’s closest star and the source of all life on Earth. Without it, plants couldn’t photosynthesize and oxygen abundance would plummet. We’d also bump into things a lot more.

Scientists know that the sun is a huge ball of hot gas made up of about 98 percent hydrogen and helium. The sun burns because it is so hot and dense that the hydrogen atoms fuse together to make helium, releasing energy in the process. But the sun is also made of traces of other, heavier elements that have been detected.

The remaining material making up the sun is carbon, nitrogen, and oxygen, all of which are heavier than hydrogen or helium. There are traces of even heavier elements too, such as neon, iron, silicon, magnesium, and sulfur, according to the Caltech Infrared Processing and Analysis Center’s (IPAC) CoolCosmos website. As far as astronomers are concerned, all of these elements that are heavier than helium are metals.

To work all this out, scientists have a couple of observational methods at their disposal to figure out what’s going on inside the sun’s fiery depths.

One is called spectroscopy. As its name suggests, spectroscopy involves observing the spectrum of light given off by the sun, which is represented by a rainbow pattern. Scientists noted as far back as the early 1800s that black lines would keep showing up on the light patterns, and today we know that these black lines indicate the presence of certain chemical elements. We can tell which element is present in the sun because it will cause a black line to appear at certain locations on the rainbow pattern. That’s spectroscopy, in a nutshell.

The other way scientists can tell what the sun’s made of is by looking at solar oscillations—the way the sun expands and contracts in characteristic patterns. It’s a field called helioseismology, and just like how seismologists can use earthquake data to tell what’s inside the Earth, these solar shakes can give clues as to what’s inside the sun.

The problem is that since the early 2000s, scientists have found conflicting results from different methods used. It’s called the solar abundance problem.

To resolve it, researchers led by Ekaterina Magg and Maria Bergemann at the Max Planck Institute for Astronomy set out to revisit what we know about the sun’s composition by having another look at the spectral estimates used in the past, which were decades old and by now known to be oversimplified.

The team applied multiple independent models, comparing results with the highest-quality spectral data from the Institute for Astro- and Geophysics at the University of Göttingen, Germany.

This sounds like a huge change. It should be noted, though, that this is a 26 percent increase of the value that was already tiny. In short, the sun is still almost entirely hydrogen and helium.

Still, the team is confident that the new finding “brings us close to a solution of the so-called solar abundance problem” according to the study.READ MORE

“The new solar models based on our new chemical composition are more realistic than ever before,” Bergemann said in a Max Planck Institute for Astronomy press release. “They produce a model of the sun that is consistent with all the information we have about the sun’s present-day structure—sound waves, neutrinos, luminosity, and the sun’s radius—without the need for non-standard, exotic physics in the solar interior.”

The study, Observational constraints on the origin of the elements, was published in the journal Astronomy & Astrophysics on May 20 this year.