Astronomers Have Detected a Curious Dust Cloud 330 Light-Years Away 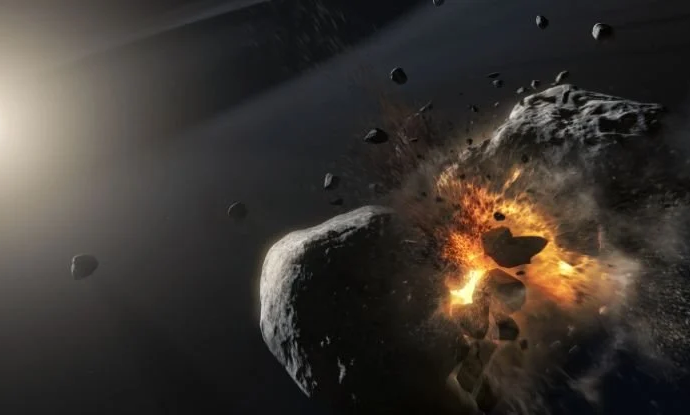 Astronomers have detected a cloud of dust the size of a whole star, 330 light-years away. Its cause? A colossal smash-up between two exoplanets that were still just forming.

We know this because astronomers have analyzed the infrared glow of said dust cloud, along with changes in the light of the host star, periodically blotted out by the debris in orbit around it. With these data, we now know the size of the objects involved, and other key details about the collision.

This could provide insight into the formation of our own Solar System – and perhaps even shed light on stars with peculiar dimming patterns, such as KIC 8462852 or Boyajian’s Star, by providing more information on how rapidly such debris clouds disperse.

“For the first time,” said astronomer Everett Schlawin of the University of Arizona’s Steward Observatory, “we captured both the infrared glow of the dust and the haziness that dust introduces when the cloud passes in front of the star.”

The star in question is a wee ickle baby, just 10 million years old, named HD 166191. Because it formed so recently, it is still surrounded by quite a bit of material, leftover from the formation process.

Stars form from a dense knot in a cloud of gas that collapses under its own mass; spinning, the star grows by accreting more material from the surrounding cloud, as the latter arranges into a disk feeding into the star, like water going down a drain.

Once the star has finished forming, whatever is left in the disk can go on to form the other elements of a planetary system. Clumps of material stick together, first attracted electrostatically, then gravitationally.

As you can imagine, this is a messy process, with lots of collisions. Eventually, enough material sticks together to form, first a planet seed, or planetesimal, then eventually a planet.

Collisions between bodies can guide the process. It’s thought that our Moon formed when another planetary body slammed into Earth during the Solar System’s youth, for example. But it’s not a given that every collision will leave survivors.

Led by astronomer Kate Su of Steward Observatory, a team of researchers used the now-retired Spitzer Space Telescope to make infrared observations of HD 166191. These wavelengths can penetrate dust clouds to see what processes are taking place in heavily shrouded environments. In addition, starlight absorbed and re-emitted by dust glows brightly in infrared.

Between 2015 and 2019, the researchers collected 126 datasets from the star, looking specifically for orbiting clouds of dust that may be the result of a planetesimal collision.

In 2018, the signal they had been looking for showed up: an infrared brightening, suggesting an increase in dust, and a dimming, suggesting that the light of the star was being blocked. The same dimming event was captured by a ground-based telescope in optical wavelengths – and a similar dimming 142 days earlier, during a gap in the Spitzer observations.

Multi-wavelength transit data confirmed it: The signal was generated by the guts of two planetesimals that smacked into each other and spewed dust everywhere. The earlier observation from the ground-based telescope suggested an orbital period of 142 days, which gave an orbital distance from the star of 0.62 astronomical units. That’s the distance at which rocky planets are expected to form.

Having data from multiple transits also allowed the team to observe the evolution of the cloud. It changed rapidly from the first to the second transit, ballooning out, growing wider and more opaque and elongated, covering an area at least three times that of the star.

But Spitzer data suggests that just a small portion of the cloud passed between us and the star. That suggests that the actual cloud was much, much bigger, perhaps hundreds of times bigger than the star.

To produce so much dust, the team calculated the collision had to have been between two bodies that were dwarf-planet sized, around 400 to 600 kilometers (around 250 to 470 miles) in diameter. The initial collision would have generated so much heat that some of the material vaporized; the remainder would have flown into fragments that continued to ricochet around and collide with each other, as well as other rocks in the vicinity, to create even more dust.

By the time the third transit was due to roll around, very little trace of the original cloud remained. However, the environment around the star had grown twice as dusty as it was before the collision. This suggests that the debris from the collision dispersed quite rapidly throughout the protoplanetary disk around the star.

Not only does this suggest that clumpy dust clouds may not be a good fit for explaining peculiarly dimming stars, but it can also help elucidate the processes that go into forming a full planetary system, including ours.

“By looking at dusty debris disks around young stars, we can essentially look back in time and see the processes that may have shaped our own Solar System,” Su said.

“Learning about the outcome of collisions in these systems, we may also get a better idea of how frequently rocky planets form around other stars.”

The team will continue to monitor HD 166191 to see if they can spot any more fascinating changes in its dusty shroud.

The research has been published in The Astrophysical Journal.