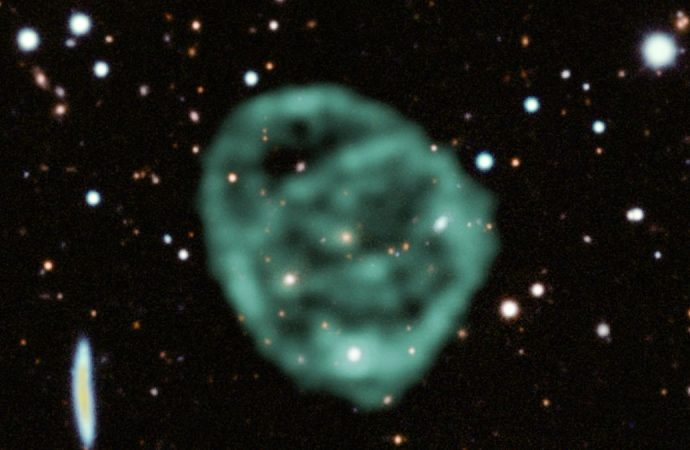 There is a new kind of mystery object in space, and after capturing their best image yet, astronomers are one step closer to understanding these celestial oddballs.

They are known as odd radio circles, or ORCs. While the thought of ORCs may bring the goblinlike humanoids from the “Lord of the Rings” books to mind, these fascinating objects have baffled scientists since they first discovered them in 2020.

These space rings are so massive that they measure about a million light-years across — 16 times bigger than our Milky Way galaxy.

Astronomers believe it takes the circles 1 billion years to reach their maximum size, and they are so large that the objects have expanded past other galaxies.

Now, a new image captured by the South African Radio Astronomy Observatory’s MeerKAT telescope provides more detail and information. (MeerKat is shorthand for Karoo Array Telescope, preceded by the Afrikaans word for “more.”) The image and findings were published Monday in the Monthly Notices of the Royal Astronomical Society.

Initially, astronomers thought the circles could be galactic shock waves or even the throats of wormholes, among a whole host of ideas.

Now, researchers have narrowed down a range of theories to three.

The odd radio circles could be remnants of a huge explosion at the center of a galaxy, not unlike what happens when two supermassive black holes merge together.

Second, they might be powerful jets pumping out energetic particles from the galactic center.

Or, the third possibility is that they could be the result of a starburst shock wave triggered by the birth of stars in a galaxy.

Only five radio circles have been found in space so far.

“We know ORCs are rings of faint radio emissions surrounding a galaxy with a highly active black hole at its centre, but we don’t yet know what causes them, or why they are so rare,” said study coauthor Ray Norris, a professor at the Western Sydney University and CSIRO, in a statement.

So far, odd radio circles have only been found by telescopes that observe through radio wavelengths. Visible light, infrared and X-ray telescopes have yet to spot them, despite their massive size.

As radio telescope astronomers find more of them to observe, those observations could help fill the many knowledge gaps about these curious new objects.

“People often want to explain their observations and show that it aligns with our best knowledge. To me, it’s much more exciting to discover something new, that defies our current understanding,” said study author Jordan Collier, astronomy and bioinformatics user support specialist at the Inter-University Institute for Data Intensive Astronomy in South Africa, in a statement.

Collier produced the new image from data collected by MeerKAT.

The MeerKAT telescope, located in the Karoo region of South Africa, includes an array of 64 radio dishes and has been operational since July 2018. The powerful telescope is sensitive to faint radio light.

Collaboration will allow astronomers to find more of the odd radio circles — as will more sensitive radio telescopes in the future.

“No doubt the SKA telescopes, once built, will find many more ORCs and be able to tell us more about the lifecycle of galaxies,” Norris said in a statement. “Until the SKA becomes operational, ASKAP and MeerKAT are set to revolutionise our understanding of the Universe faster than ever before.”

The array will include thousands of dishes and up to a million low-frequency antennas in an effort to build the world’s largest radio telescope.

Despite the fact that these dishes and antennas will be in two different parts of the world, together they will create one telescope that has over 1 million square meters (386,102 square miles) of collecting area, meaning that astronomers can survey the entire sky much more quickly than with other telescopes.

It will also exceed the image resolution of the Hubble Space Telescope and image large portions of the sky in sensitive detail.