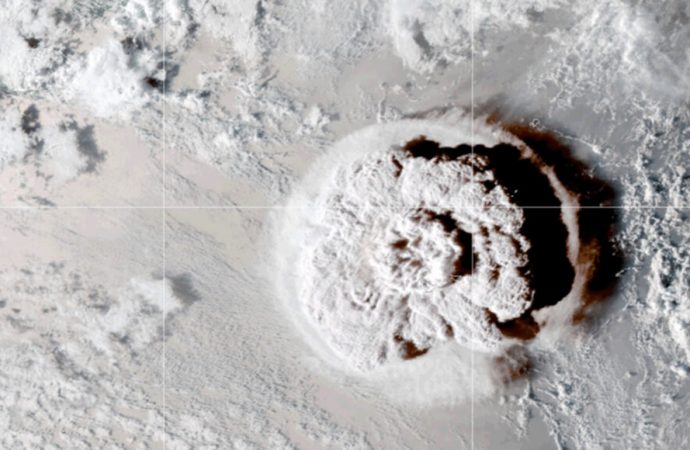 On January 15, an underwater volcano in the island nation of Tonga erupted with the explosive force of a nuclear bomb, and it may not be done just yet.

The eruption of Hunga-Tonga-Hunga-Ha’apai volcano in the South Pacific launched a towering, mushroom-shaped cloud of ash and dust at least 20 kilometers into the atmosphere — and possibly as high as 39 kilometers by one estimate. The blast sent shock waves that are still rippling through the atmosphere a week later.

Images show ash caked on Tonga islands, coating buildings, clinging to crops and probably contaminating water supplies. The power of the explosion also triggered a rare volcanic tsunami that raced across the ocean, inundating the densely populated island of Tongatapu 65 kilometers away from the eruption, sending residents fleeing to higher ground. At least three people have died due to the eruption and tsunami.

The volcano may now return to a period of dormancy after releasing its fury. But it also might not. Researchers who have studied Hunga-Tonga-Hunga-Ha’apai’s eruptive history, recorded in layers of hardened ash and fragments of volcanic pumice, say that this volcano has tended to erupt explosively every thousand years or so — and not just once, but in multiple pulses.

Whether that will happen this time, and if so, when, is very difficult to say at this point, says Shane Cronin, a volcanologist at the University of Auckland in New Zealand. He has been working with colleagues to gather information on the volcano to help with relief efforts and predict what might come next.

“Time will tell, and the next few days may tell us a lot,” he says.

Tonga has no active seismometers — and communications from the island nation remain largely incapacitated by ashfall and flooding. But with the help of satellite images, Cronin and others are keeping close watch over the region, hunting for changes to the volcano’s shape or height or other indicators that may signal that magma might be on the move again.

For now, the volcano’s violent past may offer some clues to its future. Even before the recent eruption, most of the volcano, including the caldera, or central crater, was submerged; now it’s sunk even farther. But at the crater’s fringe lie two small, uninhabited islands — Hunga-Tonga and Hunga-Ha’apai. They once rose a hundred meters or so above the water. That’s where, after a small 2014–2015 eruption, a new volcanic cone appeared, essentially bridging the two islands. That provided a landing spot for Cronin and his colleagues, who journeyed there in 2015 and discovered Hunga-Tonga-Hunga-Ha’apai‘s hidden history.