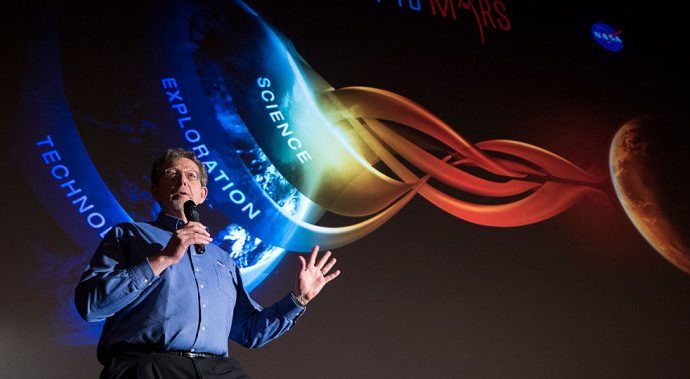 NASA’s top scientist has worked his final days, and now he’s moving on to greener … planets?

After four decades with the space agency, Jim Green has hung up his hat and is now turning his focus to his plan to make Mars a planet fit for human exploration and, perhaps, habitation.

Green has held the title of chief scientist with NASA for the past three years, and his tenure also included 12 years at the director of NASA’s planetary science division. His retirement began at the beginning of this year.

But he’s also been working on a plan to terraform Mars by jumpstarting the planet’s magnetic field, which could eventually control the climate in a way that would allow Mars to sustain human life.

“For a long-term human presence on Mars to be established, serious thought would need to be given to terraforming the planet,” Green, and other scientists, wrote in a November 2021 paper that will print in the journal Acta Astronautica this month. “One major requirement for such terraforming is having the protection of a planetary magnetic field which Mars currently does not have.”

In an interview with the New York Times, Green broke down what would need to happen in order to trap more heat on Mars, warm its climate, and make it habitable.

Currently, the sun strips away about 90 per cent the Martian atmosphere, but Green says that if the stripping is stopped, pressure will increase and Mars will begin to terraform. One of the ways he’s proposed this is possible is by building a giant magnetic shield that could be placed between the sun and Mars.

“There are several scenarios on how to do the magnetic shield. I’m trying to get a paper out I’ve been working on for about two years. It’s not going to be well received,” Green said.

“The planetary community does not like the idea of terraforming anything. But, you know, I think we can change Venus, too, with a physical shield that reflects light. We create a shield, and the whole temperature starts going down.”