Yes, there is really ‘diamond rain’ on Uranus and Neptune 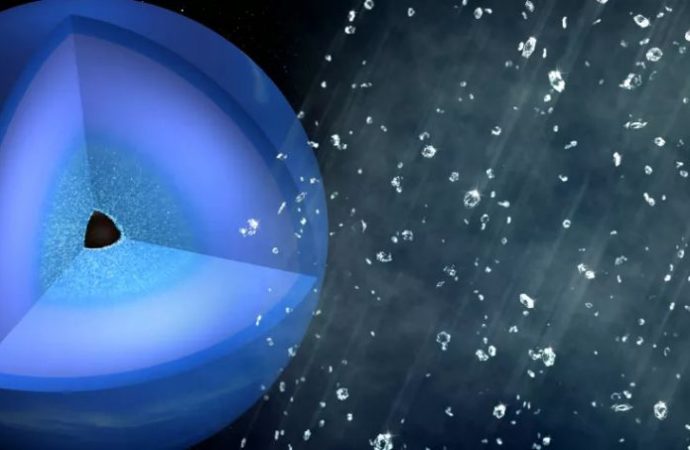 The ice giants Uranus and Neptune don’t get nearly enough press; all the attention goes to their larger siblings, mighty Jupiter and magnificent Saturn.

At first glance, Uranus and Neptune are just bland, boring balls of uninteresting molecules. But hiding beneath the outer layers of those worlds, there may be something spectacular: a constant rain of diamonds.

“ice giants” may conjure the image of a Tolkien-esque creature, but it’s the name astronomers use to categorize the outermost planets of the solar system, Uranus and Neptune.

Confusingly, though, the name has nothing to do with ice in the sense you would normally recognize it — as in, say, ice cubes in your drink. The distinction comes from what these planets are made of. The gas giants of the system, Jupiter and Saturn, are made almost entirely of gas: hydrogen and helium. It’s through the rapid accretion of those elements that these huge planets managed to swell to their current size.

In contrast, Uranus and Neptune are made mostly of water, ammonia and methane. Astronomers commonly call these molecules “ices,” but there really isn’t a good reason for it, except that when the planets first formed, those elements were likely in solid form.

Into the (not so) icy depths

Deep beneath the green or blue cloud tops of Uranus and Neptune, there’s a lot of water, ammonia and methane. But these ice giants likely have rocky cores surrounded by elements that are probably compressed into exotic quantum states. At some point, that quantum weirdness transitions into a super-pressurized “soup” that generally thins out the closer you get to the surface.

But truth be told, we don’t know a lot about the interiors of the ice giants. The last time we got close-up data of those two worlds was three decades ago, when Voyager 2 whizzed by in its historic mission.

Since then, Jupiter and Saturn have played host to multiple orbiting probes, yet our views of Uranus and Neptune have been limited to telescope observations.

To try to understand what’s inside those planets, astronomers and planetary scientists have to take that meager data and combine it with laboratory experiments that try to replicate the conditions of those planets’ interiors. Plus, they use some good old-fashioned math — a lot of it. Mathematical modeling helps astronomers understand what’s happening in a given situation based on limited data.

And it’s through that combination of mathematical modeling and laboratory experiments that we realized Uranus and Neptune might have so-called diamond rain.

The idea of diamond rain was first proposed before the Voyager 2 mission which launched in 1977. The reasoning was pretty simple: We know what Uranus and Neptune are made of, and we know that stuff gets hotter and denser the deeper into a planet you go. The mathematical modeling helps fill in the details, like that the innermost regions of the mantles of these planets likely have temperatures somewhere around 7,000 kelvins (12,140 degrees Fahrenheit, or 6,727 degrees Celsius) and pressures 6 million times that of Earth’s atmosphere.

Those same models tell us that the outermost layers of the mantles are somewhat cooler — 2,000 K (3,140 F or 1,727 C — and somewhat less intensely pressurized (200,000 times Earth’s atmospheric pressure). And so, it’s natural to ask: What happens to water, ammonia and methane at those kinds of temperatures and pressures?

With methane, in particular, the intense pressures can break the molecule apart, releasing the carbon. The carbon then finds its brethren, forming long chains. The long chains then squeeze together to form crystalline patterns like diamonds.

The dense diamond formations then drop through the layers of the mantle until it gets too hot, where they vaporize and float back up and repeat the cycle — hence the term “diamond rain.”

The best way to validate this idea would be to send a spacecraft toUranus or Neptune. That won’t be an option anytime soon, so we have to go with the second-best way: laboratory experiments.

On Earth, we can shoot powerful lasers at targets to very briefly replicate the temperatures and pressures found inside the ice giants. One experiment with polystyrene (aka Styrofoam) was able to make nano-sized diamonds. No, Uranus and Neptune don’t contain vast quantities of polystyrene, but the plastic was much easier than methane to handle in the laboratory and, presumably, behaves very similarly.

Also, Uranus and Neptune can keep up those pressures for a lot longer than a laboratory laser, so the diamonds could presumably grow to be a lot larger than nano-sized.

The end result? Based on everything we know about the composition of the ice giants, their internal structures, results from laboratory experiments and our mathematical modeling, diamond rain is a very real thing.