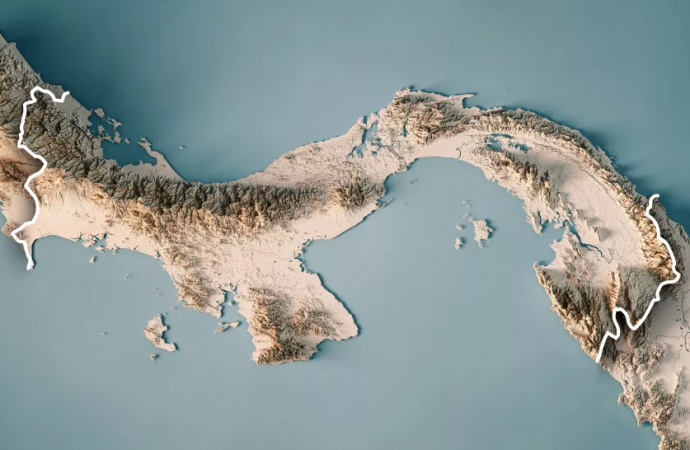 A geological secret passage beneath Panama may explain why rocks from Earth’s mantle are found more than 1,000 miles (1,609 kilometers) from where they originated.

This opening, located some 62 miles (100 km) below Earth’s surface, may allow a flow of mantle materials to travel all the way from beneath the Galápagos Islands to beneath Panama.

This never-before-discovered form of transport may also help explain why Panama has very few active volcanoes. On the west coast of Central America, the Cocos tectonic plate is diving down and pushes oceanic crust under the continental crust of the North American, Caribbean and Panama tectonic plates, a process called subduction. This subduction zone creates a line of volcanoes called the Central American Volcanic Arc where lava pushes through the boundaries. But the volcanism stops in western Panama, which sits on the Panama plate , said David Bekaert, a postdoctoral scholar in marine chemistry and geochemistry at Woods Hole Oceanographic Institution in Massachusetts.

This relative peace has long been a mystery. Now, Bekaert and his colleagues report in a new study published Nov. 23 in the journal Proceedings of the National Academy of Sciences that the culprit may be a window-like opening in the Cocos tectonic plate that’s being pushed down toward Earth’s center.

Bekaert and his colleagues are trying to understand more about how subduction works near Central America. The subduction of the Cocos plate under North America has the capacity to cause large earthquakes, including the 2017 Chiapas quake, a magnitude-8.1 temblor that killed dozens.

To learn more, the researchers delved into the geochemistry of the region, collecting volcanic rock samples as well as gas and fluid samples from hot springs. They were interested in looking at ratios of molecular isotopes, which are variations of the same atoms with different numbers of neutrons in their nuclei. In this case, the researchers were particularly focused on isotopes of helium and lead.

“Different sources of geological material typically have different compositions, so we can track the contribution from different regions of the mantle,” Bekaert told Live Science.

The mantle is mostly made up of silicate rocks, which are rocks with a particular structure of silicon and oxygen atoms. But the precise composition can vary a lot over even small distances. The researchers found that there were some strange anomalies under Central America.

“We found that in particular places of Central America, namely western Panama and behind the volcanic arc in Costa Rica, we have some exotic signatures [of geochemistry] that really resemble what you have in the Galápagos Islands,” Bekaert said.

Blowing in the (mantle) wind

This was strange, because there was no clear way to explain how mantle elements from the Galápagos could get all the way to Panama, Bekaert said. The researchers then turned to seismic imaging of the mantle, which uses earthquake waves to map what’s beneath the surface, and computer modeling to try to explain what might be going on.

They found that deep beneath Panama, the buried portions of the Cocos plate may hold the answer. When a tectonic plate slides under another tectonic plate during subduction, that subducting plate doesn’t just disappear; it retains its structure as it grinds down into the mantle, only gradually heating and warping.

“Just beneath Panama, there is a hole, a window through the slab, that allows for the influx of this mantle component,” Bekaert said.

This window may be the result of a natural, pre-existing fracture in the subducting Cocos crust, or it may be a place where the crust snapped during subduction. Either way, it lets materials pass through — from one side of the plate to the other — like a breeze through an open window.

That left the question of what might be driving the breeze. The researchers found two possibilities. The first is that the materials are moving through the Panama Fracture Zone, a zone of cracking in the crust and upper mantle that connects the Galápagos to Panama . But it’s difficult to see what would drive long-distance transport through that zone, Bekaert said. It’s not clear whether such transport is even possible.

A more likely scenario, the researchers found, is that the typical, large-scale circulation of the mantle simply drives materials through the opening in the subducting slab.

“When we have done the modeling of the mantle circulation in this place, you expect this deep global mantle flow,” Bekaert said.

The existence of the mantle window can also explain the lack of active volcanoes in Panama, Bekaert said. Water locked into the crust of subducting slabs tends to promote the formation of volcanoes because water lowers the melting point of rocks, leading to the formation of magma. The opening in the slab under Panama means there is a gap in the water-rich crust in that spot, which in turn means it’s harder to get melty magma flowing there.

The mantle flow the team discovered is under-studied, Bekaert said, but there are unexplained anomalies in the chemistry of the mantle all over the world. The team hopes to conduct a similar analysis in Chile next, but ultimately wants to expand the method around the globe.

“No one’s been thinking about this process before,” Bekaert said, “so I just want to consider all the data.”