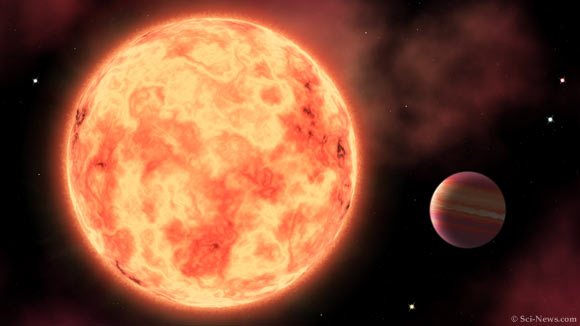 “While space-based discoveries have been led by NASA’s Kepler and K2 missions, TESS is making a growing contribution to the population of planet-hosting M dwarfs, with 28 of 185 such planets discovered. Of those, only 17 are transiting planets in long-period (over 15 day) orbits.”

The alien world was first identified in TESS data, with further confirmation from several ground-based facilities, including three telescopes (1-m SAINT-EX, 0.60-m TRAPPIST-North, and 1.2-m FLWO telescopes) in the SPECULOOS group that are designed for observations of small planets around ultra-cool red dwarfs.

The planet is 2.2 times larger than Earth and falls into the sub-Neptune class of exoplanets.

“The long transit duration suggests the planet is in a highly eccentric orbit (e ~ 0.5), which would make it the most eccentric planet known to be transiting an M-dwarf star,” the astronomers said.

“TOI-2257b orbits the host star at a distance where liquid water is possible on the planet, and therefore conditions favorable for the emergence of life could exist,” they added.

“Planets in this so-called habitable zone near a small red dwarf star are easier to study because they have shorter orbital periods and can therefore be observed more often.”

“The radius of TOI-2257b suggests that the planet is rather gaseous, with high atmospheric pressure not conducive to life.”

“We found that TOI-2257b does not have a circular, concentric orbit,” Dr. Schanche said.

“In terms of potential habitability, this is bad news: while the planet’s average temperature is comfortable, it varies from minus 80 degrees Celsius to about 100 degrees Celsius (from minus 112 to 212 degrees Fahrenheit) depending on where in its orbit the planet is, far from or close to the star.”

“A possible explanation for this surprising orbit is that further out in the system a giant planet is lurking and disturbing the orbit of TOI 2257b.”

“Further observations measuring the radial velocity of the star will help confirm the eccentricity and search for possible additional planets that could not be observed in transit.”

The discovery of TOI-2257b is reported in a paper in the journal Astronomy & Astrophysics.