There’s an Antarctica-Sized Hole in the Ozone Layer 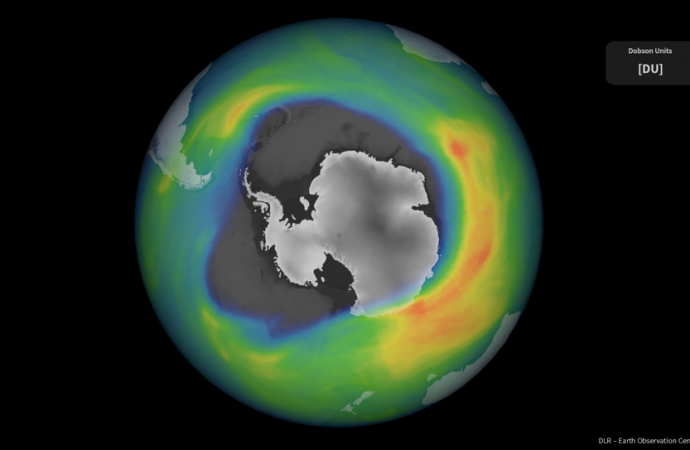 It’s the largest hole in more than a decade and shows that, while the ozone layer is healing, it’s a long road to full recovery.

The quintessential 1980s problem of the ozone hole is still with us today. And in not-great news, this year’s ozone hole is bigger than usual and has spread over the entirety of Antarctica and then some.

The European Union’s Copernicus Atmosphere Monitoring Service released the findings on Thursday, marking the second year in a row of a super-sized ozone hole forming over the South Pole. It was just two years ago that the region saw its smallest ozone hole on record.

This year’s hole is in the top quarter of the record books and the biggest since 2010 for this time of year. It covers an area of roughly 8.5 million square miles (22 million square kilometers), more than double the area of Europe. It could still grow in the coming weeks; the annual peak is usually in late September or early October.

The gash in the ozone layer is due to decades of use of ozone-depleting chemicals known as chlorofluorocarbons (CFCs, if you prefer a simple acronym) in things like refrigerators and air conditioners. It matters because the ozone layer blocks out harmful ultraviolet radiation that can cause skin cancer and have other deleterious impacts. CFCs were phased out as part of the Montreal Protocol, an international treaty inked in the late 1980s that’s by all accounts been wildly successful. The ozone hole is expected to heal in the coming decades, and the treaty was just amended to phase out CFCs’ replacements, which are a potent greenhouse gas. (CFCs also warm the planet, and recent research shows how important the Montreal Protocol has been to buying us time to address other greenhouse gas emissions.)

But this year’s cavernous hole in the ozone layer shows recovery takes time. Local weather patterns play a major role in determining just how big the ozone hole will get in a given year. And this year’s conditions unfortunately primed the ozone-depleting system to kick into overdrive.

Vincent-Henri Peuch, director of the Copernicus Atmosphere Monitoring Service, said in an email: “So far this season, the stratosphere above the South Pole has been very cold, the polar vortex is strong, and it looks like this is going to continue for a while.”

The cold weather and strong polar vortex (the Southern Hemisphere version, which is a cousin of the one you may be more familiar with) are basically a one-two punch to the ozone layer. The cold allows for the formation of polar stratospheric clouds, which contain ice crystals. Those crystals affect atmospheric chemistry, kickstarting a series of reactions when sunlight hits them that lead to rapid ozone destruction. This all happens at this time of year because it’s the start of austral summer, when sunlight beams down on the South Pole after a long, dark winter.

While a monster ozone hole may feel like its own long, dark winter, Peuch still noted that ozone recovery is a “slow, long-term” process. A couple of bad years for the ozone layer doesn’t mean our overall progress is off track.