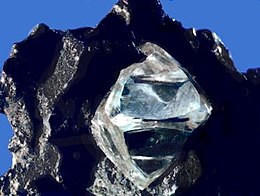 Two very exciting aspects of diamond were listed above… one that the Romans believed that Diamonds were parts of the outer rings of stars that fell to earth (indeed diamonds need high pressure for their creation) and the other is the belief that diamonds activate the seventh chakra.

As I embark on yet another adventure, I would like to publicly muse on the trip I am about to embark into the world of carbon … mainly diamonds and buckyballs (a.k.a. fullerenes).  The science alone is enough to dwell upon for a lifetime’s full study, but since I only have a short time before I am fully immersed into, not only the science but the mystical side of carbon … here is a short synopsis of what I am trying to accomplish, with the help of my wife and of a cryptic mystical man with his fully assembled team.

Let’s start with the science:

Diamond is a metastable allotrope of carbon, where the carbon atoms are arranged in a variation of the face-centered cubic crystal structure called a diamond lattice. Diamond is less stable than graphite, but the conversion rate from diamond to graphite is negligible at standard conditions. Diamond is renowned as a material with superlative physical qualities, most of which originate from the strong covalent bonding between its atoms. In particular, diamond has the highest hardness and thermal conductivity of any bulk material….

Because of its extremely rigid lattice, it can only be contaminated by a very few types of impurities, such as boron and nitrogen. Small amounts of defects or impurities (about one per million of lattice atoms) color diamond blue (boron), yellow (nitrogen), brown (lattice defects), green (radiation exposure), purple, pink, orange or red. Diamond also has relatively high optical dispersion (ability to disperse light of different colors). Source: Wikipedia https://en.wikipedia.org/wiki/Diamond

Buckyballs (fullerenes) A fullerene is a molecule of carbon in the form of a hollow sphere, ellipsoid, tube, and many other shapes. Spherical fullerenes, also referred to as Buckminsterfullerenes or buckyballs, resemble the balls used in association football. Cylindrical fullerenes are also called carbon nanotubes (buckytubes). Fullerenes are similar in structure to graphite, which is composed of stacked graphene sheets of linked hexagonal rings. Unless they are cylindrical, they must also contain pentagonal (or sometimes heptagonal) rings…

The discovery of fullerenes greatly expanded the number of known carbon allotropes, which had previously been limited to graphite, graphene, diamond, and amorphous carbon such as soot and charcoal. Buckyballs and buckytubes have been the subject of intense research, both for their chemistry and for their technological applications, especially in materials science, electronics, and nanotechnology. Source: Wikipedia https://en.wikipedia.org/wiki/Fullerene

As you can see the science of Carbon is complex. Currently governments are only concerned with the creation of carbon dioxide (CO2) and methane (CH4) and the creation of carbon taxes… but the technology of carbon will be regulated in ways that governments cannot even conceive of yet. Because of current medical breakthroughs such as fullerenes as medicinal delivery systems and food preservative functions, there is an obvious way that governments will find new ways to regulate and tax carbon through institutions like the FDA.

But what has me excited is – the up until now mystical properties of Carbon. Science may be able to crack some of the fundamental truths about the universe if they just look at some of the wisdom that has been passed down to us by our ancestors.

The science properties of diamond are well characterized.

Visualisation of a diamond cubic unit cell: 1. Components of a unit cell, 2. One unit cell, 3. A lattice of 3×3×3 unit cells

But so are the mystical properties.

The famous Persian poet Hafiz remarked that, “the rainbow is confined in a diamond forever”. In antiquity, a diamond was always thought to be a symbol of innocence and purity. Ancient Greeks thought that diamonds represented the tears of weeping gods. Ancient Romans thought diamonds were considered to be parts of the outer rings of stars, which had fallen to the earth….    The diamond is associated with activating the seventh chakra, Sahasrara, uniting the mind with the body. While a diamond is regarded as the strongest precious stone, it is also regarded as a stone of exceptional power as it is able to reach into us and open many spiritual doors. This is perhaps why diamonds represent truth. They also symbolize perfection because of their indestructibility….Diamonds have been believed to improve one’s energy, environment, growth process, prosperity, love life, faith and endurance. The stone also attracts abundance, strength, power, courage, fortitude, creativity, imagination, purity, harmony, faithfulness, innocence, increased feelings of self-respect and love, and relationships full of pure love. In fact, diamonds are believed to fill negative spaces in oneself with the purity of love. The stone will help you accomplish your dreams and destiny….

In the East, a diamond is used as a heart tonifier. Typically, one that is ill, places a diamond in a glass of water. The glass is left overnight next to their bed and when the morning comes, the water is to be sipped in several steps, to aid the heart. In general, diamonds have been known to prevent cardiovascular disease, leukemia and skeletal problems. They stimulate the glands of the endocrine system, balance metabolism and enhance eyesight. They are also believed to help glaucoma, vertigo, and dizziness, strengthen the immune system and metabolism, and fight against stomach aches. They can also help with memory loss, bad depression, fever, fatigue, skin disease, and nightmares. The stones also help people who are overcome with addictions.

Two very exciting aspects of diamond were listed above… one that the Romans believed that Diamonds were parts of the outer rings of stars that fell to earth (indeed diamonds need high pressure for their creation) and the other is the belief that diamonds activate the seventh chakra.

So let’s start with the first one… diamonds were part of stars… indeed when the universe was formed and stars started churning out more complex forms of matter – carbon was born inside stars and released into the universe with their fiery deaths. I believe that the evolution of matter is fundamental in understanding the evolution of life. Indeed God merely had to lay down the plan of matter evolution to create everything in the universe. Two key substances are Carbon and Water (H2O). Indeed if one can trace the evolution of Hydrogen, Carbon, Nitrogen and Oxygen, one can understand the evolution of life. All but Hydrogen needed stars for their creation. Now thousands of books have been and are currently being written about this phenomenon, I suggest finding one and trying to understand some of what is being said. But again that is not what is most exciting about Carbon. Those that have read my books, especially Johnny’s Ripple, know that I believe that the seventh chakra is the gateway between the higher five chakras and the lower six chakras, but that also the seventh chakra is the portal to the universe and God. Diamonds enhance this connection! Indeed if the message of all evolution is embedded in matter that was created close to the beginning of this universe, then what better way to keep the message uncorrupted, than in the hardest known natural substance – Diamond. Diamond will be found to be the quantum DNA of all matter; that which holds the initial message of God from the time of creation.

This opens up so many possibilities. The first step we needed to do, was to find the conduit from diamond to humanity, to listen to the message that is contained within.

And we have found it – Water is the conduit that we sought.

Already so many pathways have been open to the group I have joined to unlock these secrets. We will be bringing to the world, new products and techniques that will make use of the knowledge we have gained.

The journey will take a while, so stay tuned to this website and some others that we will announce shortly, but make no mistake, the world will be changed by the box we have now opened. We will use Light and Sound Frequencies combined with virtually all of the Material Science properties of Carbon and Water to deliver breakthrough technologies to your door.

Governments will watch us with wonder and have no idea of how to regulate what we will release to the world. Freedom.

This is the journey on which I have embarked.