$1,000,000 Offered for Definitive Evidence of the Existence of Bigfoot 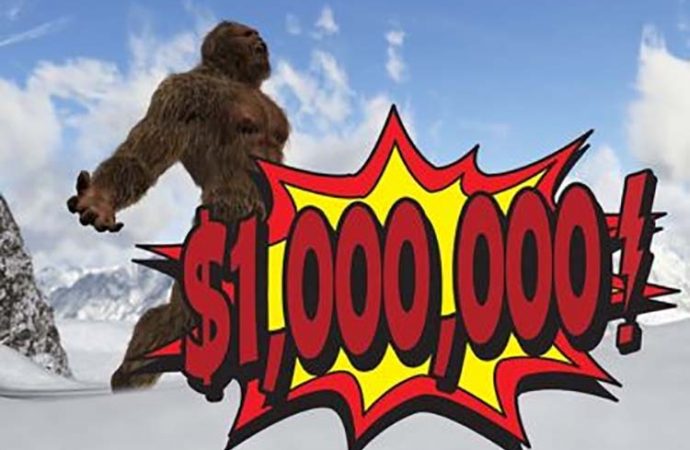 How can it be possible that a creature who is described in so many different places, from prehistory until the modern day Sasquatch sightings, does not exist?

Everyone wants to know; is Bigfoot real? Can a creature like Bigfoot, also known as Sasquatch, actually exist on the edge of the known world for centuries, without leaving hardly a trace of its existence? Can it be that we are looking for the wrong clues, or in the wrong places? Can it be that the creature remains hidden and unknown because it does not want to be found?

We’re determined to discover the truth about the most recent Sasquatch sightings. Scott J. Cooper, CEO and Creative Director for World Patent Marketing, and Co-Founder of Squatchworld.com is putting his money where his mouth is. His offer? A $1 million prize for irrefutable Bigfoot evidence.

Cooper became interested in the search for Bigfoot after a California inventor submitted an idea for a Bigfoot doll to several patent companies.   Immediately, Cooper jumped at the project and has been working tirelessly to turn Squatch World it into a brand.  The website is squatchworld.com and the company is already overwhelmed with pre-orders.  You can find a collection of Bigfoot plush stuffed animals and an internet portal for anything having to do with Bigfoot.  You can read about the latest Bigfoot evidence, Bigfoot sightings and more.  Squatch World is developing a board game, a mobile app, knapsacks, toys, a clothing line for kids and is planning a celebrity event called, “You Have Been Squatched!”  The company is in negotiations with a Hollywood Studio about an animated film.

“I try to keep inventors from getting emotional about their ideas.” said Cooper, “The problem is – I am not very good at following my own advice.  I really believe this is going to be a billion dollar brand – bigger than Cabbage Patch Kids.  In addition to the kids market, 26% of Americans believe in Bigfoot.  The international market is wide open for us.   Squatch World is not only about selling products.  It is about bringing more attention to the search for Bigfoot evidence.  Our phone is already ringing off the hook since the word got out.  Can you imagine the instant popularity of the brand if Bigfoot evidence is actually obtained.   It would be the best million I ever spent.”

Bigfoot, or Sasquatch, is one of the fascinating legends in modern America. Sasquatch sightings have been mentioned in the historical record since the North American arrival of the first Europeans. There are many legends of the Native Americans featuring Sasquatch, described as a huge hairy ape-like man, walking upright on two feet.

But North America is not the only place where Bigfoot sightings have been going on through the centuries. Almost every continent on the planet has legends and stories of the great “ape man” who is elusive and remains in hiding on the very edges of civilization. In South America, they refer to the hidden giant as Patagonia, which means Bigfoot. In the Himalayas, Europeans know the creature as the Abominable Snowman, but to the natives, it is the Yeti. Mapinguari is another name from South America, and Yowie is the name given to Sasquatch in Australia.

How can it be possible that a creature who is described in so many different places, from prehistory until the modern day Sasquatch sightings, does not exist?

One would have to assume that people from all over the world, all walks of life, even before there were mass media, only enjoyed making up stories about the same giant ape that lived remote forests and impassable mountains. It hardly seems possible. Those who believe that Sasquatch is real, claim that of course sightings are rare because the creature is intelligent and notoriously shy. Some think this is a sign of Sasquatch intelligence because having witnessed what humankind has done to the Buffalo and the Caribou; Sasquatch just chooses to remain hidden. Others say that it is the creature’s shy nature and their habits, they are nocturnal and live in the deepest woods, where even in this era modern man seldom ventures.

Whatever the reasons which have made Sasquatch so elusive, there have been too many sighting over too many centuries for it to be a mere myth. Without undeniable proof, the modern scientific method must regard Sasquatch sightings as little more than wild stories from scared, deranged or just mistaken people. Just as science once scoffed at the idea of Giant Squid, space travel, and remote communication; they now laugh and joke about the ridiculous Sasquatch.