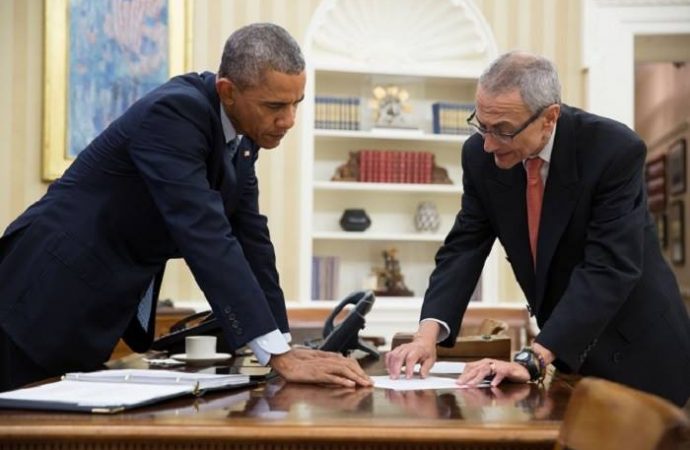 I grew up in Roswell, my family knew Oppenheimer. Let’s get our meeting time and date set up ASAP so we can move forward on our unprecedented discussion concerning disclosure of our ETI from a contiguous universe and their connection to zero-point energy for humanity.

As of October 26, there are 14 emails to and from John Podesta attempting to arrange a meeting between astronaut Edgar Mitchell with Podesta and/or President Obama. The topic of the proposed meeting would be Zero-point energy and UFO disclosure. The two latest released emails were sent by Terri Mansfield on January 21, 2015.

I grew up in Roswell, my family knew Oppenheimer. Let’s get our meeting time and date set up ASAP so we can move forward on our unprecedented discussion concerning disclosure of our ETI from a contiguous universe and their connection to zero-point energy for humanity.

The second letter written later in the day was a more specific request for a meeting. Although the email mentions Podesta “no longer with the White House” Podesta was still at the White House for almost another month when he produced his famous tweet saying he had “once again” not been able to release the UFO documents. It may have been that he had given notice to leave and Edgar had become aware of this,

Now that you are no longer serving in the White House, I write to you and Eryn requesting our face to face meeting to discuss zero-point energy and Disclosure. Our Quantrek science intuitive has provided us with a few facts about our nonviolent contiguous universe ETI who promote PACIFISM among humans and with whom we work:

1. All true ETI do not inhabit this universe.
2. So-called ETIs inhabit this universe and are in fact just celestials. They are higher in rank then discarnate spirits, even those who are evolved, HOWEVER, THEY JUST MIRROR VIOLENCE ON EARTH, FEELING THREATENED BY CONTAMINATION OF THEIR ABODE.
3. Extrauinversal ETIs on the other hand have long ago evolved past violence, relying on spiritual intelligence to avert destruction.
4. The Phoenix Lights and other sightings have provided ample evidence that Earth has been visited by beings whose intention is purely peace and who have nonviolently hovered over Phoenix and other sites, waiting to be asked to help, when they could most easily have destroyed the city with their uses of consciousness. These sightings have been witnessed by thousands of people in Phoenix alone, including my colleague Terri Mansfield, who will accompany me on our meeting with you.

Please let me now three dates and times that would work for your schedule.

This followed an email that had been sent by Mitchell, and again sent by Terri Mansfield a week earlier. In that email Mitchell requested a meeting on zero-point energy and UFO disclosure with Podesta after he leaves in February 2015.

That letter was also significant in that Edgar bring up meeting a childhood friend of President Obama. Edgar wrote,

I met with President Obama’s Honolulu childhood friend, US Ambassador Pamela Hamamoto on July 4 at the US Mission in Geneva, when I was able to tell her briefly about zero-point energy. I believe we can enlist her as a confidante and resource in our presentation for President Obama.