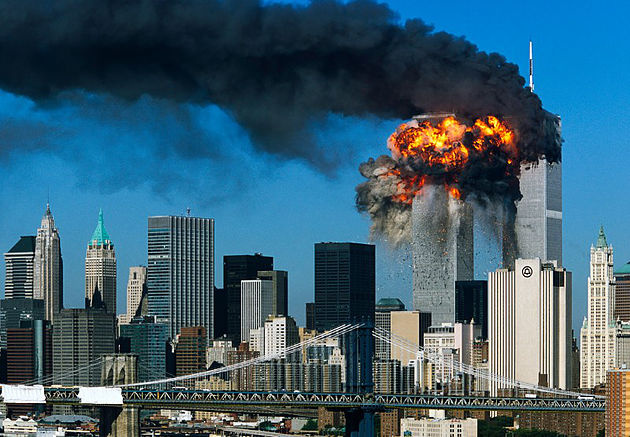 “The truth is, fascism doesn’t look like a podium pounding demagogue. It looks like a government that can read your emails and texts at any time, that can GPS you 24/7, that propagandizes you, scares you, and tosses in the occasional false flag at you to keep you in a constant state of fear and submission.”

It has now been fifteen years since America’s lurch into neofascism. No, there was no formal announcement, no statement from the President congratulating us for living under the protection of a fascist police state. And yet here we are. A situation, by the way, into which America dragged its allies and much of the world as well. A nightmare from which we cannot seem to awaken.

For those too young to remember, there was a BeforeTime. It surely wasn’t ideal: the poisoned pill of national security and empire was swallowed long before 9/11 and had already worked its way into the American and global system. But it was a time when Americans lived with the assumption that they still had rights. The 1999 anti-WTO protests in Seattle were a case in point, when more than 40,000 demonstrators shut that city down, at times even preventing the World Trade Organization from properly convening. The global anti-globalist movement reached a crisis point during those four days, and it surely seems in retrospect that our handlers at the top of our food chain decided that wasn’t going to happen any more.

Less than two years later, the hammer came down. A distinctly American form of insanity followed, egged on by the confluence of power held by the national security crowd and its voice of propaganda. That is, what we call the mainstream media: all the major TV and radio networks from Fox to NPR, and newspapers like the Washington Post, New York Times and the rest of the crowd. Everyone piled on with one voice: revenge and protection against the threat of “terrorists,” and oh yes, we might have to sacrifice some privacy and other rights–temporarily–in order to get the job done. Enter the USA PATRIOT Act.

Everyone knows this litany, or at least that is what I used to tell myself. But in an age when no one seems to know anything beyond their Facebook feed (or, God forbid, their Instagram page), in which history and political theory has vanished from the American classroom and psyche, it has to be acknowledged that not everyone knows it. We still have many sleepwalkers among us.

Even so, there are also many who are in various stages of waking up. That 9/11 was a false flag is finally becoming something that more and more people are talking about, usually quietly but sometimes openly. There are studies, websites, and books galore that anyone can look at. The histrionic denials from the establishment against such silly “conspiracy theories” (a phrase coined by the CIA in 1967, by the way) are obvious and fool only the most simple minded. And yet, despite this, the propaganda machine continues to spin its false narrative on behalf of the national security/homeland security state. People have learned to duck their heads and do little more than quietly grumble, knowing that somehow things are wrong, but unable usually to put their finger on the problem.

There is much talk in America today of the threat of authoritarianism and fascism, particular if one of the Presidential candidates wins the election. That is, we are told, if Trump wins, you had better watch out. Well, indeed, anyone who engages in such military and police state ass kissing should be feared. And yes indeed, I fear that. The reverse side of it, of course, is that his opponent Hillary Clinton is a proven regime changer and destroyer of nations (Honduras, Libya, Syria) who is every bit as much of a neocon as Dick Cheney.

The truth is, fascism doesn’t look like a podium pounding demagogue. It looks like a government that can read your emails and texts at any time, that can GPS you 24/7, that propagandizes you, scares you, and tosses in the occasional false flag at you to keep you in a constant state of fear and submission. Sorry to say, but the barn door opened fifteen years ago and those horses have long left the stable.

What we need is a fresh understanding of what America has become. Of what the true structure of power in this world looks like. Of why propaganda and false flags are being used against us.

The short answer is that there are two basic reasons: neoliberalism and neoconservatism. These are not opposites but instead go hand in hand. They are the twin ideological pillars of America’s ruling class.

Neoliberalism (or “new” liberalism) is not your classic liberalism in which the defense of human rights is the paramount objective. It is nothing other than the ideology of globalization. It is, in fact, the defense of transnational corporate rights.

Neoconservatism is its necessary counterpart. It is not the old conservatism of your grandfather; not the defense of “traditional” values and rights or any such thing. It is the “new” conservatism. Rather than conserving the classic American republic, neocons defend Empire.

For Empire is a necessary component to the globalist, neoliberal vision. After all, if you are pushing an anti-human neoliberal agenda upon the rest of the world, you will need to knock some heads. That is America’s role as global policeman. And just as American cops these days are famous for knocking their fellow citizens around, so too is the American GloboCop well known for enforcing the neoliberal corporate agenda on everyone else.

In such a situation, where jobs are being siphoned away at home and the demands of the oil empire and petrodollar system require global enforcement, an Empire will need to deceive and lie. After all, you can’t have the U.S. President announce to the world that America will invade Iraq because Saddam has begun selling his oil in euros. You can’t say that you are going to induce regime change in Libya because Gaddafi is about to roll out a gold-backed dinar that will threaten American and French financial interests. People might resist such blatant Empire maintenance. Instead, you create fictitious charades of weapons of mass destruction or non-existent carpet bombing of the Libyan people and get the job done. No matter if you turn entire nations into smoking heaps of rubble that will never recover in your lifetime. At least you continue to keep your party going for a little while longer.

Orwell once told us, “in a time of universal deceit, telling the truth is a revolutionary act.” It’s also true that in an age of corporate globalism enforced by the American Empire, lies and deception are precisely how the power elite gets what it wants. It is how that elite controls us for its enrichment. It’s bad enough that we pay these people to be lied to, that we pay them to destroy entire nations in our name. It’s even worse that so many of us are even now not awake to that fact.

But as bad as things are, they can improve. Look around. You will see signs of it everywhere. People who are waking up. People who realize that their newspapers and TV news are lying to them. On this fifteenth anniversary of the tragic death and destruction of 9/11, we are best served not by blind nationalism and more games of follow the leader into the next war. Instead, it is our job to strip away the illusions we have been fed and to begin the arduous but rewarding job of telling truth to power.