“Where Did the Towers Go?” Judy Wood to speak in Toronto! 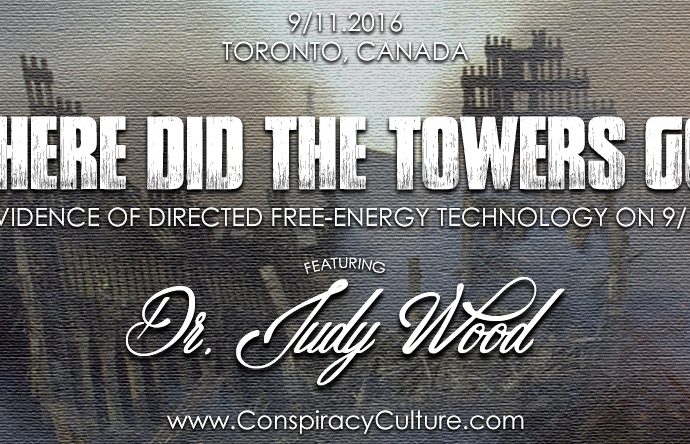 Join Dr. Judy Wood at the JJR Macleod Auditorium in Toronto on Sunday, September 11th 2016 for an exclusive Conspiracy Culture Special Event as she presents physical evidence of directed free-energy technology on 9/11.

A half mile of vertical building height, containing nearly 150 football fields of floor space, was reduced to a near-level field of dust and debris, where rescue teams walked horizontally or rappelled into empty caverns to look for survivors. How was this possible given the standard laws of engineering and physics?

The 9/11 Commission Report bypassed this central issue, as did the report of the Federal Emergency Management Agency (FEMA). Contrary to its stated objective of determining “why / how WTC 1 & WTC 2 collapsed,” the National Institute of Standards and Technology (NIST) made the absolutely incredible admission that it did not investigate how the towers fell.

Dr. Judy Wood left Clemson to research the 9/11 conundrum full time, and she has focused her research strictly on physical evidence and scientific principles. Her book, “Where Did the Towers Go?” provides an understandable, credible, and photo-enhanced summary of Dr. Wood’s disturbing findings, which resulted in her lawsuit against the contractors of the NIST report.

Join Dr. Judy Wood at the JJR Macleod Auditorium in Toronto on Sunday, September 11th 2016 for an exclusive Conspiracy Culture Special Event as she presents physical evidence of directed free-energy technology on 9/11.

Dr. Wood earned a PhD Degree from Virginia Tech University and is a former professor of mechanical engineering. She has research expertise in experimental stress analysis, structural mechanics, deformation analysis, materials characterization and materials engineering science. Her research has involved testing materials, including complex-material systems, in the area of photomechanics, or the use of optical and image-analysis methods to determine physical properties of materials and measure how materials respond to forces placed on them. Her area of expertise involves interferometry in forensic science. She taught graduate and undergraduate engineering classes and has authored or co-authored over 60 peer-reviewed papers and journal publications in her areas of expertise.

In the time since 9/11/01, she has applied her expertise in materials science, image analysis and interferometry, to a forensic study of over 40,000 images, hundreds of video clips, a large volume of witness testimony, analyses of dust samples, seismic data, and the analysis of other environmental evidence pertaining to the destruction of the World Trade Center complex.

Dr. Wood has conducted a comprehensive forensic investigation of what physically happened to the World Trade Centre site on 9/11. And, based on her analysis of the evidence she gathered, in 2007, she filed a federal Qui Tam case for science fraud against the contractors who contributed to the official National Institute of Standards and Technology (NIST) report about the destruction of the World Trade Centre towers. This case was filed in the US Supreme Court in Dec 2009. To this day, Dr. Wood’s investigation and body of evidence as compiled in her book is the only comprehensive forensic investigation in the public domain.

You do not want to miss this.