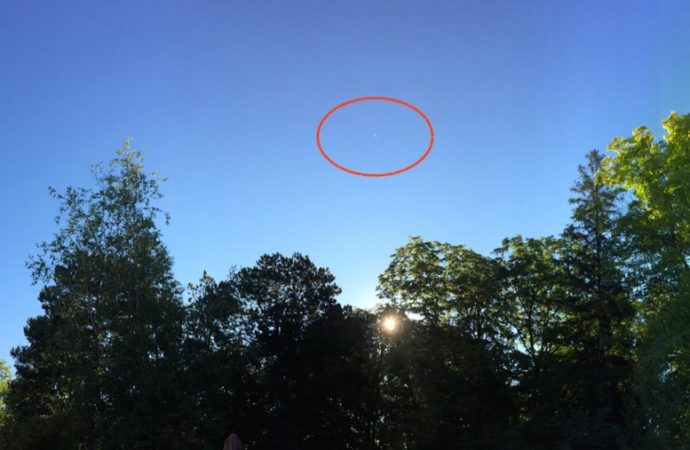 “Imagine for a moment, as if the pattern of a tiger’s stripes was energetically oscillating at an extremely fast rate.”

Approximately 10PM EST, Sunday August 28, 2016 over Newmarket, north of Toronto, Canada, two of us were sitting in the backyard facing East (see the photo below where the sun is rising the next morning with StarTracker Lite App superimposed to show the sky from Sunday night).

Traveling from North to South (left to right in the picture above) across the eastern sky at a speed that was like a shooting star was a craft that was oval in appearance, seemingly wide like a plane, at a height approximating what a commercial jet would be flying overhead.

From our sitting position on the backyard deck, it passed slightly above the trees as it sped South for a count of “1 and 2 and…” then continued with its view obstructed by the trees in a slightly wider field of view than the photo above. Initially we asked ourselves if this could be a meteorite but having already seen two a little earlier, it was clearly uncharacteristic of a meteorite. It was oval as if it might have wings but they were not perceptible wings. It was more like an energy pulse extending to each side like wings. It appeared as a quickly pulsating, oscillation with long, oval arch to each side. The rapid pulsing to each side of its center was extremely fast.

Imagine for a moment, as if the pattern of a tiger’s stripes was energetically oscillating at an extremely fast rate. That is how it appeared to me, though to Alison sitting beside me, it was more like a subdued yet oval light swishing across the sky in a dark halo surrounding it.

Unlike the meteorite that arched down from the sky towards the horizon like the two meteorites that we witnessed earlier, this UAP flew straight across the sky at a speed that is comparable to a meteorite. The energy was electric. The sky was the clearest we have seen all summer.

Approximately 30-minutes later, at 10:32pm, we saw exactly the same phenomenon in the same exact line of vision, but this time traveling from South to North. Notably, it was moving approximately at half the speed of the original sighting for a count of “1 and 2 and 3 and 4 and…” then the trees obstructed our view. At that speed, it was speeding much faster than a jet fighter would across the sky. There was no sound at all. Again, there was an electric, energetic feel to the energy filling the air, possibly our own excitement from what we saw.

This is the sky photographed on my iPhone 5s taken immediately after. Though the phone was in my hand, the craft moved much too quickly to take a shot.

I believe these are the solar systems and stars that were visible, though I am not 100% certain of their exact placement, according to the StarTracker Lite App on my phone. Very grainy shot, but it offers perspective of where we were sitting and what we saw pass across our field of view.

The next morning at approximately 7:30am I went outside to photograph the sun rising in the exact same spot we witnessed the sighting Sunday night to have a clear perspective of where we had witnessed the UAPs for this report. Upon downloading the images to my computer, one of the shots taken had a bright spot above the sun.

When enlarged, two objects are revealed. What is particularly interesting is that the seeming light source is at the top, north side of the spheres and they exhibit a shadow to the bottom south side.

While I have won awards for my photography and work in television, I am not an expert with Photoshop nor do I have proper tools for visual analysis. My question to the readers out there: Is this image typical of lens flair or is it something else that is naturally explainable?

Or, is this a genuine capture of Unidentified Aerial Phenomenon or UFO?

EMN invites all the experts online for your input and analysis.