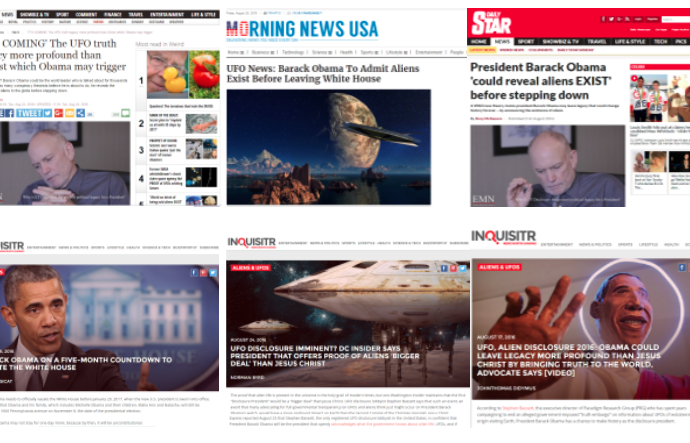 Beginning August 16 news tabloids with collectively over 140 million page views per month in the U.S. and U.K. alone jumped back into the Obama/Clinton/Disclosure story.

A PRG interview produced in Toronto in late June has received some media attention including news sites linked to the above graphics. This particular interview needs clarification  as it comes at a critical time during the presidential campaign and PRG’s political initiative to put the Disclosure imperative into that campaign.

There is an unwritten rule that one should avoid Hitler and Christ when making secular analogies. It’s a good rule one breaks at one’s peril. The analogy in question is about Disclosure – the formal acknowledgement of an extraterrestrial presence engaging the human race by heads of state of nations. This will be an event so profound it is difficult to find historical comparison.

PRG has used this analogy on a few occasions to convey the power of Disclosure as a change agent. Usually it goes well. In this instance the interview took place after two days with little sleep and a 30 hour travel odyssey from the West Coast to Toronto involving three airlines, two long layovers, a lightning storm, and a cancelled flight. Which is to say PRG was not at the top of its game, not only regarding the analogy but most of the interview. Much of the language was inartful.

That said, the Christ analogy was intentional for good reason. As of the end of June the media coverage of the Clinton/ET/Rockefeller Initiative connection had fallen off. The last relevant statement from the Clinton team was from John Podesta on June 2 at the Code Conference in Rancho Palos Verdes, CA. The debates were over, Clinton was avoiding press conferences, the nominating conventions were a few weeks away, and the television debate and forum moderators had refused to address the issue with the candidate. It was apparent to PRG the Clinton team was going to go silent on the ET issue unless new pressure was applied.  And that is exactly what happened and remains the case as of this Update. The ET issue is not the only one on the receiving end of this strategy. See Hillary Clinton’s run-out-the-clock strategy – Annie Karni, Politico, August 24, 2016.

The analogy was put in play in order to get new attention from a particular sector of the media – the news tabloids. Before you hold your nose, consider this. We live an era of media like no other. Think of a broad and continuous spectrum with the top tier, mainstream news venues at one end and the extreme tabloids at the other. In between is a vast array of media sectors, some of which did not exist a few decades ago, and all of it is having impact on the affairs of people and nations. Political change cannot occur without engagement of the greater part of this spectrum.

Earth Mystery News published the Toronto interview. It took some time, but beginning August 16 news tabloids with collectively over 140 million page views per month in the U.S. and U.K. alone jumped back into the Obama/Clinton/Disclosure story. And, of course, they focused on the Christ event analogy – graphically. Hopefully, that story will again spread across the larger spectrum.

This strategy is essential for a very important reason. The top tier media venues are not using their standing and resources to properly represent the public’s interests. This is particularly the case regarding abuses of power and secrecy by political and military/intelligence institutions. It took 19 months and hundreds of articles published around the world before the New York Times addressed the Clinton/ET/Disclosure story with a single, albeit very good, article. Nothing since. The Times of London followed with a minuscule article. Nothing since. The Washington Post has danced around the story. The Boston Globe, Los Angeles Times, Chicago Tribune, Wall Street Journal – none have secured a single interview with Clinton, Clinton, Podesta or Obama regarding a political story that has been in play world wide for two years.

And, of course, the television news programs on NBC, MSNBC, CBS, ABC, CNN, FOX have essentially done nothing, including keeping the issue out of 30+ campaign debates and forums. There is no surprise here. The truth embargo is still in effect 70 years on.

But that doesn’t alter the fact this circumstance is a grave threat to the nation. There is a long list of issues the top tier media will not properly engage for various reasons, but the failures relating to issues and stories connected to national security and the military/ intelligence complex pose the greatest danger to the public’s need to know. Over the past 70 years, if for no other reason than access, a toxic and conflicted relationship has developed between top tier media venues and national security structures. Here is but one example.

The political paper of record for the United States is generally considered to be the Washington Post. From 1946 to 2013 the Post was owned and published by the Graham family, which developed a very close relationship to the CIA – too close. In 1988 the Post publisher Katharine Graham made this statement, “We live in a dirty and dangerous world. There are some things the general public does not need to know and shouldn’t. I believe democracy flourishes when the government can take legitimate steps to keep its secrets and when the press can decide whether to print what it knows.”

Where did she make this statement?  A presentation at the CIA’a headquarters in Langley, VA. Whatever one takes away from this assertion, that the publisher of America’s political paper of record delivers it to the CIA on site is beyond the pale. The Post has never addressed or repudiated this statement.

The Graham family era as publisher of the Post formally ended on October 1, 2013 when it was sold to billionaire Jeff Bezos for $250 million in cash. Would this change the Post‘s relationship with the national security structures? Would the Post now begin to properly engage the off-limits issues such as, well, the ET truth embargo? No.

Jeff Bezos paid what some analysts thought was four times what the paper was worth. Not to worry. On October 5, 2013, just four days after closing the deal to purchase the Post, Jeff Bezos’ company, Amazon, was finally cleared to close a $600 million dollar cloud computing contract – with the CIA. On July 26, 2016 Jeff Bezos was added to the Defense Innovation Board founded by former Secretary of Defense Ash Carter in March of 2016. The DIB will advise the Pentagon in matters of high technology.

The Washington Post is not going to lead the way to Disclosure or reform of the military/intelligence complex or reform of much of anything. Neither will the New York Times nor the Wall Street Journal.

Nevertheless, great progress has been made in the broader media spectrum over the past two years. Disclosure this year by Obama is still doable if more media sectors do their job and live up to the highest ethics of their craft and their constitutional position.