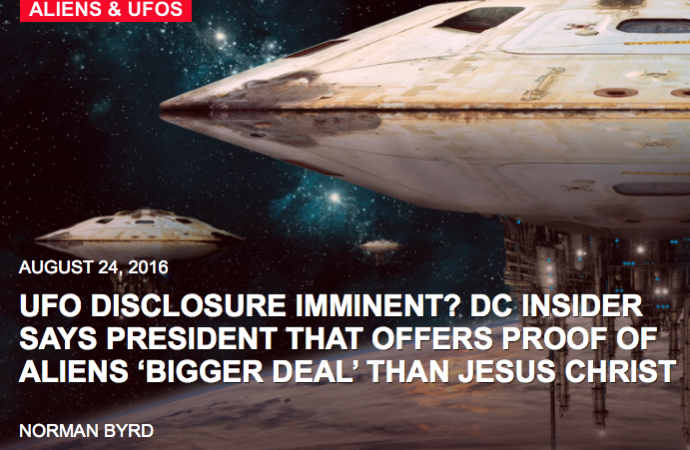 “If you think being Jesus Christ is a big deal, being the Disclosure President is a bigger deal!”

The proof that alien life is present in the universe is the holy grail of modern times, but one Washington insider maintains that the first “Disclosure President” would be a “bigger deal” than Jesus Christ. UFO disclosure lobbyist Stephen Bassett says that such an event, an event that many advocating for full governmental transparency on UFOs and aliens think just might occur on President Barack Obama’s watch, would have a more profound impact on Earth than the Second Coming of the Christian messiah, Jesus Christ.

Express reported August 23 that Stephen Bassett, the only registered UFO disclosure lobbyist in the United States, is confident that President Barack Obama will be the president that openly acknowledges what the government knows about alien life, UFOs, and if there has ever been contact with extraterrestrials. In a recent interview with Earth Mystery News, Bassett reiterated his belief that disclosure was imminent, a conviction he has had for several months and one which he shared with Express in an interview in May.

Bassett told Earth Mystery News that a full UFO disclosure from a sitting president would be “more profound than the coming [second, theologically speaking] of Jesus Christ.”

“The first head of state that makes the announcement that extraterrestrial presence is real will be one of the greatest political legacies of all time,” Bassett said. “He will go down in history. For a thousand years he’ll be talked about.

“Disclosure is the most profound event in human history and if you are the head of state that lets it out, the one who brought the Truth to the world, you will leave a legacy more profound that the coming of Christ.

“If you think being Jesus Christ is a big deal, being the Disclosure President is a bigger deal!”

Stephen Bassett is one of an increasing number of alien and UFO disclosure campaigners that not only have ardently pushed for full government transparency on UFO files and investigatory material concerning extraterrestrials, encounters, and associated phenomena for years, they now believe that the US government is on the verge of divulging the truth about what is known about aliens and UFOs.

In fact, Bassett told Express in May that he was “85 percent sure Obama will make the announcement before he leaves office.” Furthermore, the UFO lobbyist believes that such a disclosure would net the outgoing president another Nobel Prize.

But why does Bassett set such strong stock in Obama becoming the, as he labeled it, “Disclosure President”?

Back in February, as reported by Express(citing the Wall Street Journal), President Obama was put on the spot on “The Ellen Degeneres Show” by a Macey Hensley, 6, who wanted to know if the president had seen the Book Of Secrets (a fabled top secret tome said to exist, hidden in the corridors of power in Washington, that the Nicholas Cage movie National Treasure revealed held conspiracy theory truths about such topics as Area 51 and the JFK assassination) and asked if he really had seen the book (he’d joked about doing just that on a prior occasion) and if it revealed contact with aliens. He’d told the child that the information was “secret” but added, “We haven’t actually made direct contact with aliens yet. When we do, I’ll let you know.”

Disclosure enthusiasts and campaigners alike took heart with what they believed was a coy, evasive answer. Shortly after that, then Democratic Party presidential candidate Hillary Clinton stated on “Jimmy Kimmel Live!” that, if elected president, she would press for full disclosure of the government’s UFO information.

Could that particular event have been the prompt President Obama needed to make his decision? So what is stopping the announcement? Is it contingent upon whether or not Hillary Clinton wins the presidential election?

But even if a full transparency policy on aliens and UFOs was implemented, why does Bassett feel it would be more impactful than the prophesied return of Jesus Christ, the messiah for one of the world’s largest religions?

Conspiracy theorists and UFO and alien enthusiasts have long held that the main underlying rationale used by the government (and other world governments and organizations like the United Nations) to keep knowledge of alien life, UFOs, their discovery, and such a secret from the general populace is that there is an overwhelming fear of the destructive impact on civil and social institutions should information affirming the existence of extraterrestrials become public knowledge. In short, the US government (and all the others as well) fear a worldwide systemic breakdown as people realize they are not alone in the universe and that the underpinnings of society, personally held religious views that bolster moral deportment and civil law, would likely fall into chaos.

Although it is uncertain whether or not President Obama might become the Disclosure President (or even if there ever will be such a head of state), there might not be a better time for the acknowledgment of alien life. A recent article at the Conversation noted that more people seem to be accepting of the idea of UFOs and aliens than at the turn of the millennium, a social phenomenon called “re-enchantment” allowing individuals to turn to matters more spiritual or non-science (perhaps even anti-science), pushed by the “disenchantment” of the rise of scientific authority in previous decades.

YouGov reported in September that most Americans, Germans, and Brits believe that alien life exists somewhere out there. American respondents to the question of whether or not they believed that “living creatures who have the ability to communicate and do not come from Earth exist” scored a 54 percent majority agreeing with the statement. People from Great Britain notched 52 percent. Germans were more likely to be believers, topping the poll with 56 percent.

President Barack Obama will leave office in January 2017. Whether or not he discloses the existence of UFOs and aliens — or provides evidence that might suggest the government has no such knowledge — remains to be seen.