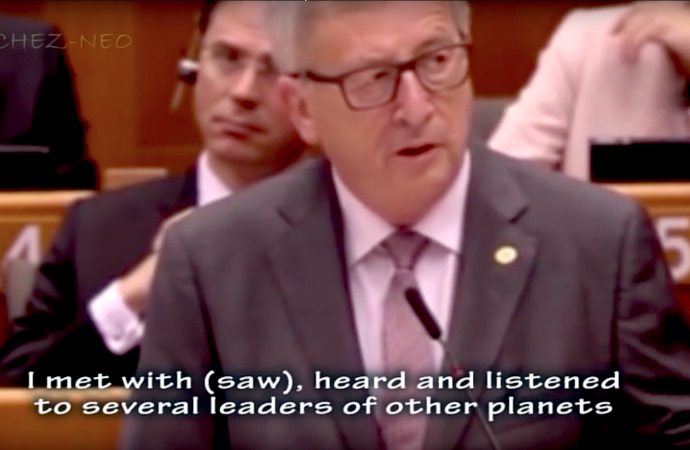 “I have seen and heard and listened to several leaders of other planets.” ~ President of the European Commission

Reported around the world from the Express and Mirror to a variety of UFO related websites and bloggers, people worldwide were in a tailspin wondering; “Did he really mean that?”

President of the European Commission — the executive branch of the European Union (EU) — Jean-Claude Juncker made headlines last month with his controversial speech of June 28, 2016 where, during a Brexit debate he was quoted as saying that aliens were worried about the looming Brexit by the UK from the Union.

Translated from French, his quote went viral as he veered away from his originally prepared speech:

Conspiracy theorists jumped quickly on this. Knowing how perfectly scripted these public speeches are, especially by such a high profile leader as Mr. Juncker, it was easy to conclude that this diversion from the original speech was a strategic message inserted into the overall script like a coded communication. But for what end?

Some theories circulating on popular conspiracy websites suggested that this might be a false flag foreshadowing a New World Order backed by the Illuminati in light of a possible threat from the “leaders of other planets”.

Others read it as another positive step in the direction of #Disclosure, but with a small ‘d’.

Most people dismissed the statement altogether and suggested that Mr. Juncker meant to say “many leaders of our planet” rather than “leaders of other planets”. Contextually speaking, that made a lot more sense.

To get clarity on the discussion, Earth Mystery News reached out to the Office of President Jean-Claude Juncker via our friend and French speaking reader, Sebastien Martin.

This is what we received:

President Juncker was referring in his speech to the fact that observers and partners from outside Europe pay close attention to events in the European Union. The authorised version of the speech, published by the Commission press service after the debate in the European Parliament states:

“The British vote has clipped some of our many wings. But our flight goes on. We will not halt our journey into the future. New horizons await. And we are flying towards horizons that are those of Europe and of the entire planet. Make no mistake, those who are watching us from afar are concerned. I have met and listened to several leaders. They are very worried because they are wondering about the course the European Union will take. So we must reassure Europeans and those who are watching us from further away.“

As a major global actor, it is only logical that the EU is of interest to those outside the EU.

Director for Strategy and Communication

Et voila! The final word on the Jean-Claude Juncker story about “leaders of other planets” was meant to read; “those who are watching us from afar are concerned. I have met and listened to several leaders.”

But we already new that!

What President Juncker was supposed to say and what he actually said are still “worlds apart.”

What do you believe?