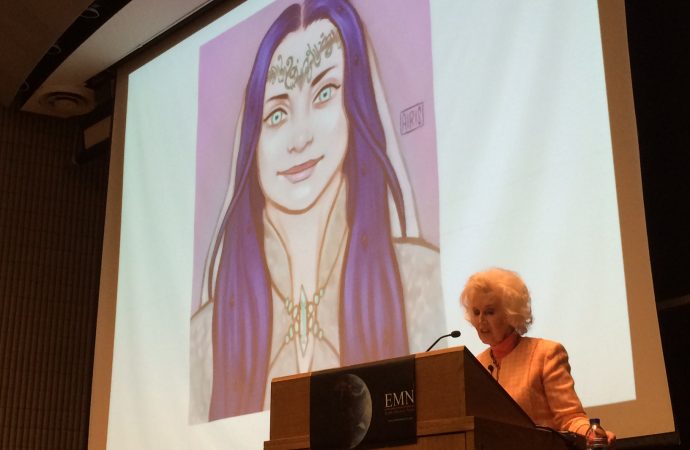 Barbara Lamb has made the world more ready to hear the truth about the interactions between humans and extraterrestrials on the Earth.

Barbara Lamb made her debut Canadian speaking engagement at the JJR Macleod Auditorium at the University of Toronto on July 10, 2016 to a riveted audience. She spoke about her many encounters with Alien-Human hybrids that live among us. She has documented these encounters in her latest book entitled “Meet the Hybrids: The Lives and Missions of ET Ambassadors on Earth”

Barbara specializes in Regression Therapy with people who experience encounters with extraterrestrial beings. Trained in Regression Therapy for several years during the 1980s by the Association for Past Life Research and Therapies (APRT), she began working with ET experiencers in 1991. She has conducted regressions with more than 800 people totaling more than 1,800 regressions to these types of encounters.

Besides having documented thousands of interviews and sessions with contactees, Barbara, herself has had many amazing encounters. Watch EMN in the next week to hear some of her amazing interactions with extraterrestrials.

EMN will be releasing an interview about Barbara Lamb’s own ET contact experiences not spoken about publicly.

We look forward to interviewing Barbara again in the near future, to continue following her remarkable career with experiencers.

Barbara’s volume of work and her meticulous documenting of the thousands of people that have turned to her for guidance and closure with regards to their experiences, has made the world more ready to hear the truth about the interactions between humans and extraterrestrials on the Earth.