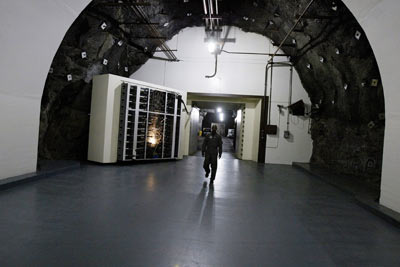 The 11 documents – including 15 pages – can be seen here for review.

NORAD Alternate Command Center prior to the Cheyenne Mountain Realignment.

No one at NORAD is saying these were UFOs – but instead, they refer to unidentified objects as Tracks of Interest (TOI) or Unknown Tracks.

Viggiani spoke Saturday night, June 25, 2016, at the Alien Cosmic Expo in Ontario, Canada, and copied panel members on the 11 documents he is in possession of.

In response to Viggiani’s request for documents pertaining to NORAD tracking or intercepting UFOs, a letter from NORAD Operations details how requests for information on Unknown Tracks cannot be released due to their sensitive nature due to national security. But the letter does provide a summation from the NORAD Commander.

“However, the NORAD Commander has approved the release of the following information regarding Tracks of Interest (TOI) and Unknown Tracks. The yearly average in the past five years has been 1,800 TOIs and 75 intercepts.”

In addition to this letter, Viggiani also received a six-page document as an example of a TOI.

Reached at his home in Toronto today, Viggiani said this particular document is very revealing, but also leaves a number of unanswered questions.

The document is a NORAD status report, which uses a line-item approach as details are available to be reported. Some of the lines are redacted or blocked out so that they cannot be seen. In one area they outline how an intercept was ordered on three objects.

“The missing information,” Viggiani said, “is obviously what did they see when they intercepted?”

Viggiani is the News Director of international news service ZlandCommunications. From his biography:

“His study of anomalous aerial phenomenon, research and analysis of Extraterrestrial issues spans over 30 years. His experience involves UFO sightings report investigation, academic and radio journalism with a primary focus on UFO/ET government Disclosure. Victor has addressed the media and audiences in Sydney and Brisbane Australia, Washington D.C., at the Washington D.C. National Press Club, CBC and CTV Toronto television news programs and at Convocation Hall University of Toronto. Victor is a co-host on the Richard Syrett Show on AM 740 Radio in Toronto.”

A video of Viggiani’s statement at the Expo is below.

The 11 documents – including 15 pages – can be seen here for review.
—-
Source and EarthMysteryNews.com
1 comment