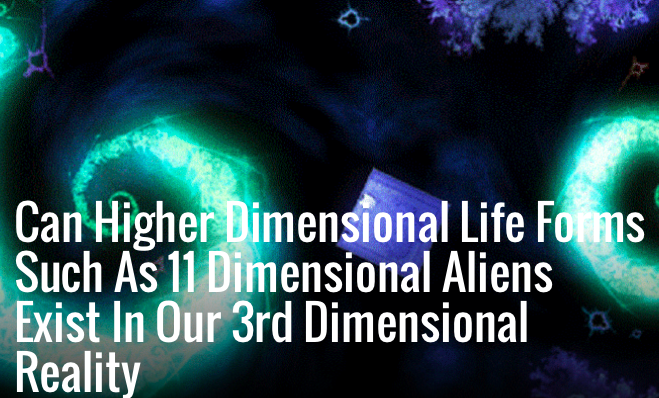 “Any sufficiently advanced hyper-dimensional creature will appear in our 3D world as background noise, unidentifiable, and indistinguishable from nature”

There are many stories in UFOlogy that reference aliens that originate in the higher dimensions. Some believers have mentioned 4th dimensional beings all the way up to 11th dimensional. It is the intention of this article to show how 11th or any advanced dimensional creatures can not exist in our 3 dimensional world. Or at least not have their fractional representation represent anything that resembles life.

In UFOlogy the vast number of people believe in what is known as “the nuts and bolts” hypothesis of UFO’s. UFO’s are real solid crafts from some distant star system. Technology analogous but completely different then our own. Advanced intelligence’s using science in ways we do not understand…yet. Advanced spacecraft just not from planet Earth.

There is another faction of UFOlogists that think our visitors are from higher dimensions in our Universe. It extends to the idea that they could even be from parallel Universes. The grand daddy of this line of reasoning is the brilliant scientist Dr. Jacques Vallée. His books are required reading for anybody interested into the serious investigation into the UFO enigma.

Many UFO experiencer’s describe experiences that are labelled “high strangeness”. “high strangeness” refers to a global phenomenon so strange and foreign to our daily terrestrial mode of thought, which it carries with it many implications of the existence of intelligence’s other than our own. It describes UFO cases that are not only peculiar but that can often be utterly absurd. In some cases, there are events before, during, and after the “sighting proper” imbued with elements of time and space distortion, bizarre synchronicity’s, strange states of consciousness, beings that act absurd, strange “creatures” associated with the sighting, but not necessarily part of the sighting, anomalous phone calls, electronic glitches, Immensely powerful Déjà vu episodes, and paranormal events including poltergeist type activity.

The high strangeness aspect of many UFO experiencer’s experiences is hard to attribute to the “Nuts and Bolts” hypothesis.

What most people do not consider is that something or someone that exists nativity in the say the 11th dimension also exists in all the lower dimensions below it. Some form of fractional representation will exist or display in the lower dimensions. So a 11th dimensional alien will have some form of fractional representation in the 10th, 9th, 8th,7th,6th,5th,4th, 3rd (ours), 2nd, and single dimensional geometry.

If you are imagining additional spatial dimensions, it makes sense to understand those primarily as mathematical attributes that are necessary to make the math of the world work out. It’s not really that special. It’s just math, as far as our experience is concerned. It’s not even math that can give us special powers, since the effects of these other dimensions are likely to be very, very small.

In the picture below a human falls through the 2nd dimension. All the human would appear like is a series of expanding and contracting circles\oblongs\ellipses\etc. Hardly a representation of a person we are familiar with. This humans fractional representation is just variations of circles.

Let’s say that one of the extra dimensions, or maybe all of them, confer an ability to travel through time. To us, they would appear to be here with us when they were elsewhere. We couldn’t perceive them moving forward or backward in time. Some of the higher dimensions may not be spatial ones. You can think of a dimension as an axis of freedom. There are undoubtedly axes of freedom that is unknown and unfathomable to us.

I have worked out and conceptualized the 4th dimension. I’m talking about four macroscopic dimensions. Obviously, it’s impossible to be sure. But given what we know and guess about the conditions propitious for life, we could speculate. Here are a few ideas of why it might not be possible:

The question puts no restrictions on how physics could operate in the 4D universe. So in many ways, it could be anything. However, in order to have life as we understand it, one necessity is time; that is, physics which has some conservation laws and time symmetries, so that the statistical laws of thermodynamics can be applied. In such a universe, life is happiest standing next to a fire; for instance, there’s us, with a burning sun on one side, and a cold vacuum of space on the other. The reason we can stay here is that the gravitational field of a point mass spreads in three-dimensional space with a flux proportional to the surface area of a sphere; that is, gravity is proportional to 1/r². That happens to allow for stable orbits, as the 4D equivalent, 1/r³, would not.

At the simplest level, a surface to volume ratio always grows linearly with r, no matter what the number of dimensions. But as soon as that surface has some thickness, that is no longer true. In enough dimensions, the volume of an arbitrarily-thin eggshell will be arbitrarily larger than the volume inside the egg. There’s no particular reason to believe this would be an insurmountable problem for 4D life, just one dimension up from us, but it would be a drag. Even here in 3D, our skin is already our largest organ.

It would also be really annoying in 4D space to leave something somewhere, then have to search for it later. Even if you were on the “surface” of a “hyperplanet”, you’d have to search in at least 3 dimensions; and 3D random walks, unlike 2D ones, are not recurrent. On the other hand, this same phenomenon would help when you wanted to throw out the garbage, or move away from your parents. It’s hard to say for sure if on balance this would be a good thing or a bad thing for life or for intelligent life, but I suspect it would be bad.

These extrapolations of the 4th dimension is sort of a randomizing factor. There may be many other randomizing factors in the higher dimensions but as before that is beyond my primate brain. The filtration through the 4th dimension will filter out anything that will be recognizable to us as anything particular. This does not necessarily mean that a higher dimensional creature has no controllable influence here in our limited 3 spatial dimensions. This is what I hypothesize is the cause of the “high strangeness” mentioned at the start of the article.

It is my hypothesis that “Any sufficiently advanced hyper-dimensional creature will appear in our 3D world as background noise, unidentifiable, and indistinguishable from nature”

Since M-Theory became well known the UFO accounts now contains accounts of 11th dimensional aliens. The other higher dimensions simply would not be apparent to us, unless they chose to present the results of their multidimensional behavior in a form we can perceive.

If the reported “high strangeness” that is reported by so many UFO experiencers is caused by higher dimensional creatures. It can be surmised that they do not completely understand our perceptions completely. They do not understand how cause and effect works in our 3D worldview. They may have totally benevolent intentions in their manipulation but it turns out to be highly freaky and startling to us. Communication filtered through the mostly unknown higher dimension realities could account for what we call “high strangeness”. Thus it is unlikely that anything meaningful can be extrapolated from such encounters unless you really, really want to.