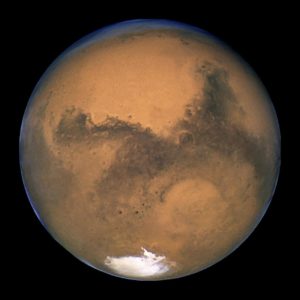 As Earth catches up to Mars in its orbit, the Red Planet will appear to halt its nightly eastward motion and move westward (in retrograde) into Libra from April 17 through August 17 before moving rapidly eastward again for the rest of 2016.

One of the five bright planets visible to the unaided eye, Mars has perplexed and tantalized stargazers since antiquity. Its ochre hue, a consequence of iron-oxide in its surface sands, prompted classical astronomers to name the planet after the Roman god of war, and its dark and changing surface markings inspired early telescopic astronomers to speculate about the presence of life on the planet. The coming weeks offer you the best chance in the next two years to see Mars with a small telescope, so here’s a guide to help you get a good view of the Red Planet in 2016.

Mars is usually a small and disappointing sight in a small telescope. But once every 780 days, or about two years and two months, Earth catches up to Mars in its orbit and makes a close approach when both planets are on the same side of the Sun. Mars then appears in our skies directly opposite the Sun, rising in the east as the Sun sets in the west. This alignment, when Mars is closest to Earth and appears largest, is called an opposition. This year Mars reaches opposition on May 22, 2016. The several weeks before and after opposition, called an apparition, are the best time to see the planet.

Because of Mars’ elliptical orbit, not all oppositions are equal. During the famous opposition of 2003, when Earth and Mars were just 34.7 million miles apart, the disk of the planet grew to a diameter of 25″, the largest Mars has appeared from Earth in 60,000 years. During the opposition of 2012, on the other hand, Mars never got closer than 62 million miles and appeared just 13.9″ across. At this year’s opposition, the planet comes with 46.5 million miles of Earth and spans about 18.6″. That’s a respectable opposition and the best since 2005, but even at its closest this year, Mars appears just 1/3 the size of Jupiter at its opposition in March 2016.

During its 2016 apparition, Mars appears in a starry section of the sky in and around the constellations Scorpius and Libra near the southern extreme of the ecliptic. For observers in the northern hemisphere, that means Mars will rise in the southeast around sunset in late May and lie low in the thick air over the southern horizon by midnight in late May and through mid June. To get the best views of the planet, you need nights or even just fleeting moments of very steady seeing. Observers in the southern hemisphere are much more fortunate because Mars is nearly overhead after midnight where the seeing is, on average, much better. The location of Mars at opposition on May 22, 2016, looking southeast a few hours after sunset as seen from the northern hemisphere. The planet straddles the border between the constellations Scorpius and Libra. From the southern hemisphere, Mars and the grand constellation Scorpius are directly overhead in the late evening hours. Created with SkySafari.

You can’t miss the planet during this apparition. With an unmistakable red-orange light, Mars will reach magnitude -2.1 at opposition, far brighter than any star and about the same brightness as the planet Jupiter, which lies low in the western sky in late May and early June Mars will far outshine even Antares, the brilliant red supergiant star at the heart of the constellation. Antares name derives from the Greek ant Ares, which means “equal to Ares”, the Greek name for the god Mars. From August 22-27, 2016, when Mars is well past opposition but still brilliant, the planet will pass within just 2º of fainter Antares.

As Earth catches up to Mars in its orbit, the Red Planet will appear to halt its nightly eastward motion and move westward (in retrograde) into Libra from April 17 through August 17 before moving rapidly eastward again for the rest of 2016. Because the planet moves quickly from night to night, if you want to find its precise location on a particular date, use your favorite planetarium software such as Stellarium.

How to Observe Mars With a Telescope

The color and brightness of Mars during an apparition are lovely to behold with the unaided eye or binoculars. But to see any detail on the surface of the planet, you will need a telescope.

Even at opposition, Mars is notoriously small and hard to observe visually in a telescope, but it rewards the patient stargazer with sights unseen elsewhere in the solar system. In steady sky at high magnification, you get glimpses of a constantly changing planet, with evidence of atmospheric cloud, fog, dust, dark regions of rock and craters, red deserts, and of course the polar caps which grow and shrink with the seasons.  The more you look at Mars, the more you see, and if you keep at it you can see an astonishing amount of detail on the Red Planet in the weeks before and after and opposition.

What’s the best telescope to use to see Mars? The one you already have, of course. Telescopes with longer-focal lengths give you higher magnification and larger images with a given eyepiece. Refractors, which have no central obstructions, tend to give better contrast. But larger aperture Newtonian reflectors or Schmidt-Cassegrain telescopes can give better resolution of fine detail because of their larger apertures and longer focal lengths.

Look at this image from about 10 feet away to see Mars as it might appear in a small telescope in good seeing (credit: faulkes-telescope.com)

As for eyepieces, again, use what you have.  The best eyepieces for observing planets have simple designs with fewer optical elements and a moderate field of view.  You don’t need $400+ eyepieces to see planets. A good-quality Plossl or Orthoscopic eyepiece will do just fine.

Some other observing tips for seeing Mars: A #25 Wratten filter threaded for a 1.25” eyepiece: an essential filter for observing Mars (credit: Agena AstroProducts)

To get better contrast of the planet’s surface, try a few color filters if you have them.  Here are some suggested filters for Mars observing sessions:

(Note: Agena AstroProducts has an excellent summary table that shows which color filters work well with the planets).

Also, to be frank, you need to manage your expectations.  No matter how big your scope, Mars won’t look anything like images you see the magazines or astronomy websites.  In a small telescope, Mars looks tiny and gives up little detail at a glance. Astronomy writer Timothy Ferris wrote of observing the planet, “Observing Mars through a telescope is like watching the Dance of the Seven Veils: seldom are you certain of exactly what you’ve seen, but it’s enough to pique your interest”.

The most important tool for observing Mars is patience. Even on Mars’ small disk, you can see an astonishing amount of detail if you look carefully, on and off for long periods of time, and wait for fleeing moments of steady air.

What To See on the Surface of Mars

The surface of Mars is classified into two types of regions, the lighter red-orange regions covered with rusty dust and the darker regions which are large areas of exposed volcanic rock.  During early days of telescopic observation, the light regions were thought to be continents so they were given names that described land masses.  Major regions of this type include Elysium Planitia (the Elysium Plain), Arabia Terra(Land of Arabia), the circular Hellas Planitia (Plains of Greece), and Amazonis Planitia (Amazon Plains).

A full-surface map of Mars showing the major regions of the planet visible from Earth (credit: Sky and Telescope).

The darker regions were names after seas, lakes or other watery features.  So there is the very large Mare Erythraeum (Arabian Sea) in the south, Mare Acidalium (named after a legendary fountain) in the north, and most strikingly, the large wedge-shaped feature Syrtis Major named after the Gulf of Sidra off the coast of Libya.  Syrtis Major is the most obvious dark region on the Martian surface.  Many of these dark regions appeared to early telescopic observers to change size during the Martian year.  They suspected this was caused by changes in vegetation or rainfall.  It turns out the dark regions do not change their dimensions, but instead occasionally are obscured by atmospheric dust. The imaginative 19th-century astronomer Percival Lowell noted the region called Solis Lacus (Lake of the Sun), just south of what we now know to be Valles Marineris, an enormous valley as long as the continential United States, seemed to wax and wane with the seasons.  Lowell observed many (illusory) canals converging in this region and speculated it was the capital of the Martian civilization.  Solis Lacus is a part of what’s now called Solis Planum.  Observers often remark that these dark regions appear green.  They are not… they are grey-brown and simply appear green because of the contrast with the red-orange surroundings.

In some images of Mars from space or from Earth-based telescopes, whitish features are visible. These are usually cloud formations.  They are associated with low-lying regions where clouds collect, or in the vicinity of the peaks of volcanoes where warm air rises up the side of the mountain and condenses into clouds.

The key features to look for on Mars with a small telescope include:

Sky and Telescope magazine has a useful Javascript tool to help you see what is currently visible on the face of Mars, assuming such features are not obscured by a Martian dust storm. You can access the free tool at this link (free registration may be required):

In this tool, you specify your time of day and date, as well as your preference of view to match your telescope: inverted (like with a Newtonian telescope), mirror reversed (as with an SCT/MCT/refractor with a star diagonal), or direct view (with an erect-image telescope… not a common situation for astronomers).  Then this Javascript tool generates a small map to show you what to look for.  It also gives you the expected apparent magnitude, diameter (in arc-seconds), and other data.  This application also assumes you’re observing from Earth’s northern hemisphere, where the north pole of Mars points toward the north direction in the sky.  If you’re in the southern hemisphere, then this image must be inverted again with the controls.

Mars imaged by the Hubble Space Telescope during its opposition of 2003 (credit: NASA/HST)