What Is the Rockefeller Initiative and it’s Connection to Clinton, UFOs, and Disclosure? 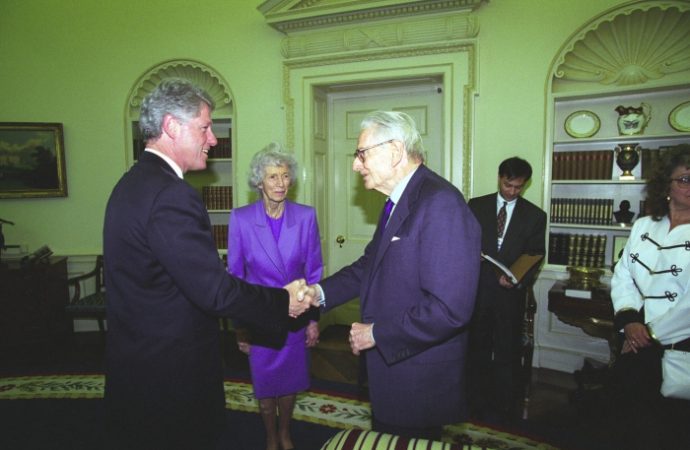 Will it be the legacy of outgoing President Obama making a public statement that we are not alone in the universe, or will presidential hopeful, Hillary Clinton, emerge as the Disclosure President?

The question is, WHY?

In a recent television interview on Jimmy Kimmel Live, Hillary Clinton said that she believes that alien life may be out there and, barring any threats to national security, she intends to open up government files on UFOs and Area 51.

Many suggest this is about attracting votes, and the numbers are impressive.

A survey commissioned by the National Geographic Channel in 2012, for example, found 80 million Americans — or slightly more than a third of the nation’s adult population — who said they believed UFOs are real.

More than a third of those who were surveyed said they believed aliens have visited Earth and almost half were not sure. Only 17 percent said they did not believe so.

Based on the numbers, that’s a significant enough segment of voting Americans worthy of attention, especially from presidential candidates in an unpredictable and unconventional race to the White House.

But… According to #Disclosure lobbyist Stephen Bassett, it’s not about the votes.

When Jimmy Kimmel pointed out to the former first lady on his much quoted interview that Bill Clinton said he already checked the UFO files and found nothing there, Hillary responded defiantly, “Well, I’m gonna do it again!”

Again refers to the Rockefeller Initiative.

Essentially, documents obtained from the Office of Science and Technology Policy and the Clinton Presidential Library via the Freedom of Information Act confirm the Rockefeller Initiative is the highly important and little publicized effort by Laurance Rockefeller to convince President Bill Clinton to release all government held documents relating to the UFO phenomena, end the truth embargo and effectively be the “Disclosure President.”

Close-up of the book that Mrs. Clinton is carrying,  Are We Alone: Philosophical Implications of the Discovery of Extraterrestrial Life  by Paul Davies

President Clinton with Laurance Rockefeller at the White House, May 23, 1995

While famous for many things, “Disclosure” was not the legacy of President Bill Clinton.

According to those who work closely with Stephen Bassett, in November of 2014 Bassett began the Congressional Hearings Initiative making ‪#‎Disclosure of the Extraterrestrial Issue a political issue in the presidential race with a focus on the Rockefeller Initiative.

Stephen Bassett explained back when this began how it would unfold, what the goals were, and according to those close to Bassett, “we have met most of them.” The next goal is Network Television. “Steve Bassett interviewed on Network Television is the next step.”

How the Disclosure dominos fall is anyone’s guess.

Will it be the legacy of outgoing President Obama making a public statement that we are not alone in the universe, or will presidential hopeful, Hillary Clinton, emerge as the Disclosure President continuing where her husband Bill Clinton fell short? And if Hillary Clinton does not make it all the way to the White House, what then?

The truth is out there and sooner or later, it will be disclosed.