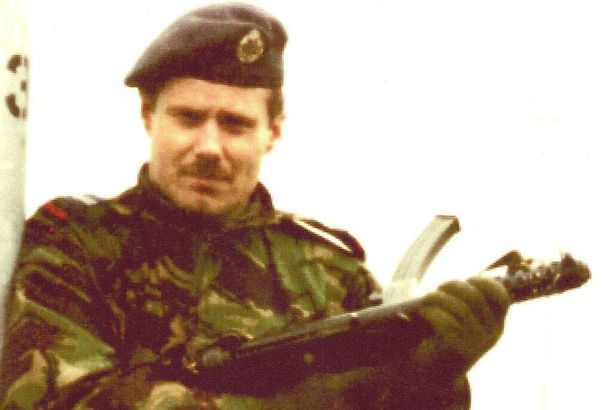 A former police officer has come forward with astonishing information which he says sheds new light on Britain’s most famous UFO case.

Gary Heseltine, 56, claims a UFO visited RAF Bentwaters as extra-terrestrials were interested in a ‘secret’ stash of nuclear weapons at the American airbase.

The incident, dubbed the British Roswell, made the front page of the now defunct News of the World and has sparked several books and documentaries.

Gary, who clocked up almost 24 years in the British Transport Police, claims the deputy base commander, Colonel Charles Halt, told him the Suffolk airbase had the largest arsenal of nuclear weapons in Europe.

UFOs reportedly buzzed Rendlesham Forest and the nearby USAF base over three nights in late December 1980.

During one close encounter, Staff Sergeant Jim Penniston says he even touched a small triangular craft describing it as “smooth to touch” with strangle symbols similar to ancient Egyptian hieroglyphs before it zoomed away.

Col Halt led a small team of experts into the woods when the UFO returned two nights later and made a 20-minute tape recording as he described the object as like a ‘red winking eye’.

He also filed a memo detailing the incident to the British Ministry of Defence which was released under auspices of the Freedom of Information Act a few years later.

The most controversial aspect of the incident are reports the UFO fired beams of light into the ‘weapons storage area’ – a term used by the military for nuclear bunkers.

Retired detective Gary claims Col Halt told him that RAF Bentwaters had “more nuclear missiles in the weapons storage area (WSA) than anywhere else in Europe”.

He says the high-ranking USAF official made the shocking admission as they toured the base and Rendlesham Forest for a documentary, which was never made.

Col Halt is one of the highest ranking military witnesses in the world to have talked about UFOs.

Gary, who guarded nukes while serving in the RAF Police, said: “As my wife Lynn and I walked with Colonel Halt through Rendlesham Forest I clearly remember him saying ‘that there were more nuclear weapons in the WSA at Bentwaters than anywhere else in the whole of Europe’ and he laughed that the peace protesters who were just up the road camped outside Greenham Common were oblivious as to where they really were.”

Backing up her husband, Lynn said: “I clearly remember Colonel Halt saying that there were ‘more nuclear weapons in the WSA at Bentwaters than anywhere else in Europe’. It has always stayed with me because of the fact that the peace protesters at Greenham Common had been duped.”

However Col Halt told Mirror.co.uk: “My comment to Gary was, ‘It appears the beam was in or near the weapons storage area’.

“Keep in mind I was a mile or more away. I never made such a statement about weapons to Gary. Those are his conclusions.”

The UK and US governments have always had a policy of neither confirming nor denying that weapons of mass destruction were stored at the base.

If the USAF base did indeed have nukes it could have contravened UK/US armament treaty obligations of the day.

In December 1980, the base was on high alert as Soviet troops were massing on the border of Poland over Lech Walesa and the rise of the solidarity movement and there was a US hostage crisis ongoing in the Middle East.

He added: “This information now provides for the first time a genuine motive as to why UFOs turn up at the bases in late December 1980 at a time of world crisis and clearly implies to me that a huge cache of illegal nuclear weapons posed a potential destabilising threat to the Earth.”

The latest twist comes after two retired radar operators at the base claimed the UFO travelled 120 miles in eight seconds.

Ike Barker and Jim Carey tracked the unidentified target making a sharp right angle turn on radar and said it was not man-made.

However sceptics claim the UFO was a lighthouse, the re-entry of a satellite or a meteor, despite high radiation readings taken by experts at the landing site.

*Gary Heseltine is a contributing author for EarthMysteryNews.com