“There is a 50/50 chance we will get some sort of disclosure in the next twelve months.” 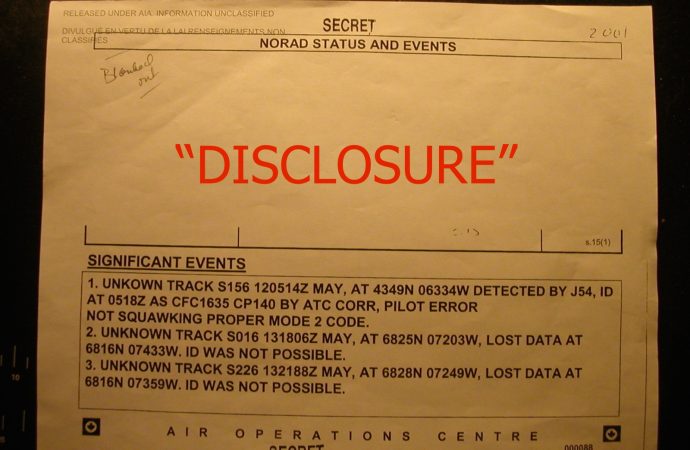 The government “does not want their finger prints on the disclosure” and they are looking for a way to do this.

“They may already be here.” Hillary Clinton

“There are classified documents that can be declassified.” John Podesta

In a couple weeks I will have spent 41 years in the field of UFO investigation. In all that time I have always held a dim view of the possibility that any government would come forward to tell the public the true story of what is behind the UFO phenomena. The reason for this pessimistic attitude came from an article I wrote looking at why the government might be covering up the UFO story. I assumed that the people behind the cover-up were government officials as opposed to a secret cabal. More importantly, because 13 successive US administrations have all handled the UFO situation the same way, I assumed that they were simply ordinary government officials facing a complex problem, and that for legitimate reasons, like every other country in the world, they had chosen to “kick the can down the road,” as opposed to disclosing what they knew.

When I made the list of possible reasons I had a list of 65 reasons that might have inspired the president to stick with secrecy. When I looked at the list I came to understand why 13 administrations did the same thing. I came to believe that anyone facing the same facts as president would do the same thing.

I was so convinced of this position that when asked by Steve Bassett in front of one of his big X-conferences I predicted disclosure would not come until 2042. This must have come as a shock to other panel members who were saying six months to a couple years.

Well, in the last couple months things have changed. What I have seen behind the scenes leads me to believe that there is a 50/50 chance we will get some sort of disclosure in the next twelve months. This does not mean full disclosure but it does mean some significant change in the government position that there are no visiting ETs and no cover-up of the evidence.

The revelation I see coming may not change the overall picture much, as disclosure announcements have been made a number of times in the past. In each case there was a brief flurry of interest followed by a return to talking about the latest sightings, evil aliens, and how unfair the cover-up is. The following events fall into this category;

1)      In June 1981 after watching a screening of ET: The Extraterrestrial at the White House by Steven Spielberg, President Reagan stood up in front of 39 high level people and said, “I bet there aren’t six people in this whole room that know that everything on that screen is absolutely true.”

2)      In March 2012 while campaigning in Roswell, President Obama stated the following after telling an opening joke on Roswell, “We’ll keep our secrets here,” indicating that he was fully aware of the story of the 1947 crash and that there was a decision not to tell the people.

3)      In 2014, while on a visit to the White House by Jaden Smith, the son of Men in Black Actor Will Smith, Obama made a statement to Jaden that he knew would become public. Jaden wanted to ask Obama about the aliens and Obama picked up on the question without it even being asked. Standing in the situation room, Obama told Jaden, “I can neither confirm nor deny that extraterrestrials have visited the Earth, but if they have, and if there had been a top secret meeting on the subject, it would have occurred in this very room.”

4)      In 2015, while appearing on the Jimmy Kimmel show, President Obama was faced with the question of whether or not he had sought out the true of the UFO story once he got to the White House. His reply was made with a breathing rate that had elevated to 42 breathes a minute, He responded, “I can’t reveal anything which is much more indicative of the idea that he did look and find something, as opposed to the official public government position that there is no evidence of visiting ETs and no cover-up of the evidence by the White House.

5)      On the 65th anniversary of the 1947 Roswell crash, a top CIA official, Chase Brandon, appeared on Coast to Coast AM to announce that “there was a craft from beyond this world that crashed at Roswell.” The CIA did not reject what Brandon had said and no reporters pushed to get the details from Brandon or the CIA.

There are four main events that have led me to this “road to Damascus” moment. Some I can talk openly about and like the cover-up itself, events must play out in a cloak of secrecy.

One particular experiencer has shown me clear evidence that he has many high level contacts including at least one indirect contact with the White House. I am aware of the names of five of the people that he has interacted with and I personally know three of them. There is no doubt there is an interaction with the government and at least this one experiencer.

What I have been told by the experiencer, and one of the people dealing with him, is that the government does want the government involvement connection UFO mystery story out. They, however, believe that they require an outside group to do it. The phrasing that I was given is that the government “does not want their finger prints on the disclosure” and they are looking for a way to do this. The experiencer is part of this effort and is actually playing the role of go-between NASA and the non-human intelligence.

The idea of how you get disclosure without the government’s fingerprints on it still escapes me.

Early in 2015, DeLonge began an effort to take to the government, believing that he had the ability to get out the disclosure message to the young people in America through the same channels he used to get out his music.

Even though DeLonge was not cleared for the Top Secret UFO information, it appears that some elements of the government have chosen to talk to him and have given him some access to the undisclosed UFO data.

The key official mentioned by DeLonge who has chosen to be a part of his effort to get out the inside story of UFOs to the public is John Podesta. This indicates that the group the musician is dealing with is not a total disinformation operation to mislead the UFO community. Podesta is considered to be a key government connected official who has a strong interest in the UFO phenomena. His involvement in the DeLonge initiative would indicate an opening of information on the subject as Podesta is a very strong supporter of the government providing as much information as possible to their citizens. That information, according to Podesta, is requirement for voters to cast their vote based on accurate information about what the government is doing.

Delonge will be releasing the information he is being provided in a series of fiction and non-fiction books.

Some might say that one elected, Hillary will hide behind national security, and nothing will be released. It is, however, too late for that. As with the examples mentioned above about previous disclosures, the disclosure has already taken place.

If Hillary states she cannot disclose based on national security concerns, she will confirm that classified material is being withheld. That statement will be an admission that there is a cover-up of UFO material which runs directly against almost 70 years of official government statements that there is no evidence of ETs visiting the Earth, and that there is no cover-up. More importantly, Hillary will alert the major media outlets that the ET story is for real, and that admission will inspire many to begin a serious investigation of the claims, and will lead to serious demands from the media to the president and high ranking officials to explain decades of lies. The game is over.

The move to end the game appears to be a clever move by Hillary’s campaign chairperson to put the government into a box on UFOs that they cannot get out of.

Prior to Hillary being asked about UFOs at the end of 2015 Podesta was busy encouraging reporters to ask Hillary “about the aliens.” This was a bold move that he had to have polled, because he was putting a multibillion dollar campaign for president on the line.

In interviews Podesta has done in 2016 he stated that he convinced Hillary to do it and then made her promise that if elected she would follow through. Once Hillary made the offer to disclose and confirmed the promise to Podesta the box was built and the move to some sort of disclosure inevitable.

The move to get Hillary to make the promise was an achievement for Podesta after a number of failed attempts.

Podesta was unsuccessful in getting Bill Clinton to move on the issue during the eight years he spent advising him in the White House. He did, however, manage to get Clinton to draft executive orders in 1994 and 1995 that allowed for the disclosure of over one billion pages of classified government records.

During the Obama administration, as he confirmed to Tom Delonge, Podesta talked to the president about UFO disclosure but was unable to move Obama on the issue. This led to Podesta’s famous tweet on his last day in the Obama administration (before starting to direct the Hillary campaign) that his biggest disappointment of 2014 was one again not getting UFO disclosure.

Today, the New York Times picked up the Hillary UFO story. They played the story straight and had all the components of the story including references to the Rockefeller Initiative that Hillary played a key role in.

The story has also now been handled by most of the major newspapers in the world. The snowball is rolling down the hill picking up speed and more snow. There is no doubt something is about to happen.

If nothing else, the toxic nature of the UFO subject with the media has vanished. Consciousness on the reality of visiting non-human intelligences has been elevated to the tipping point. Like the social movements of African American rights, gay rights, woman right to vote, and gay marriage, it appears the UFO disclosure movement may soon have its day in the sun.

Main Photo: Declassified 2001 T.O.I. « Tracks of Interest ».  An example of eye contact with UFOs over Canada and North America. In the report was described that contact with 2 UFOs at 35000 feet.