Is This 10-Million Year Old Sculpture Connected To The Varginha UFO Incident? 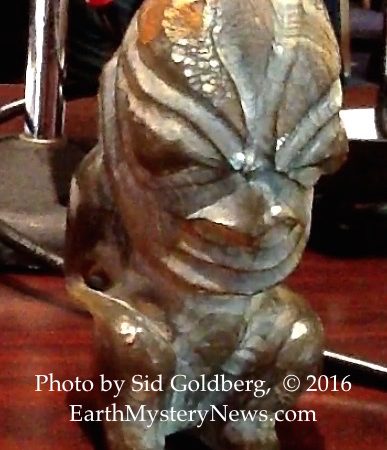 The archaeologist from China smiled, pointed towards the sky and said; “Why do you think we are called the Dragon people?”

Considered the “Roswell” of Brazil, the Varginha UFO Incident of January 1996 refers to a series of events involving the alleged sighting and capture by the military of one or more extraterrestrial beings in the town of Varginha, in southwest Minas Gerais region of Brazil.

Media attention was extensive with coverage by news and television outlets worldwide. Tremendous detail about the exact timeline of events have been described in articles and books.

I too covered the event 7-years later as a Director for a TV mystery series.

This is what I found.

(The field where Lilliane and her sister and friend witnessed the strange creature – Photo: Sid Goldberg 2002)

Lilliane de Silva, her sister Valquíria, and their friend Kátia Andrade Xavier were the primary witnesses. I met up with Lilliane in that very same field where we recreated the scene for our cameras.

Lilliane told us that they unexpectedly noticed some strange creature by the tree. She said to the other girls: “Look!”

When they saw it move they became so frightened that they ran off.

Lillian described the creature as dark brown, reddish brown, with a big head. There were 3 protrusions or horns coming out of the top of its head. It had no hair but it had greasy oily substance all over its skin. What she noticed first were the eyes. They were “huge” and “red”. Also outstanding to Lilliane was the putrid, ammonia-like stench in the air. The Silva sisters said they ran from fear to tell their mother that they had seen the “devil”.

Based upon the many drawings and first-hand descriptions of the ET, our TV production art department created a rubber mask and suit to recreate what the three girls allegedly witnessed.

Lilliane said it was unlike any animal, creature, or human alive.

“It was the ugliest thing I had ever seen”.

She said it was sitting only about 5-meters or 16-feet away when she saw it.

Mrs. Silva returned to the field with her daughters Llliane and Valquíria approximately 20 minutes later.

The alien or “creature” as they referred to it, was no longer there. She only saw footprints on the ground but smelled something so rancid, similar to ammonia,  that it stayed in her nose for three days.

We asked Mrs. Silva to draw what she saw and this V-shaoped footprint is what she produced.

(Mrs. De Silva drawing the print in the earth that she witnessed in the field when Lilliane brought her back to the same spot – Photo Sid Goldberg 2002)

The night before the “creature” appeared, a farmer and his wife reported seeing something strange in the night sky located 10 kilometers (6 miles) northwest from the town of Varginha, midway between Varginha and Tres Coracoes.

It was just after midnight when Eurico Rodrigues De Freitas and his wife Oralina were startled by all the farm animals. The animals were uncharacteristically vocal and stampeding within their stalls as if in fear.

Oralina got up, looked through the window, and saw a strange object over their cattle. She called her husband. He described seeing something the size of a school bus. It was long, cylindrical, and shaped like a cigar, hovering about 5-meters above him or just a little higher than the trees. He said he didn’t know exactly what color it was because the object was surrounded by a fog or smoke, as if encircling the craft. Oralina thought it could have been grey in color, though it was difficult to tell at night.

What Oralina told us next evoked a very powerful emotional response from her. She described a light shining down from the craft over her husband Eurico. She said it left a rash or burn-like mark on his chest and legs for several days after. Tears came to her eyes as she relived those moments with us.

I also spoke with a local researcher who was on the scene the days following. He said that he checked out the area 5 days after the girls’ alien sighting but by then rain had washed away the alien’s footprints.

People living nearby reported seeing the police, army, and fire department taping off the area.

The police and fire department didn’t want to speak about the incident. However off-camera, speaking very quietly through my interpreter, one of the senior firemen on the scene at that time shared his firsthand experience with me. He and his team were the first responders who secured the area. This was two days later when another creature was allegedly found lying along a road. Three military trucks arrived to retrieve it.

What he saw was very similar in description to what the girls described — deep reddish brown, small, hurt, and with a terribly foul odor. The military took over the scene and quickly took the creature away. He said that the American military was in charge of the operation. He shared this with me one to one and then agreed to speak later on camera when my crew was in place.

Once other firemen gathered and they saw the video cameras that were setting up for the interview, on-camera, the same fireman denied seeing anything. Rather, they never even received a call about an extraterrestrial.

As frustrated as I was after the blatant denial by the Sergeant at the fire station, I didn’t think the words “cover-up” until I learned from Lilliane’s mother that she had an unusual visit a few days later.

Soon after the sighting three men in dark glasses appeared at her house. The men insisted that the girls lie about what they saw and even insisted that they didn’t see anything at all. The men offered money to keep them quiet but Mrs. Silva didn’t accept anything because she knew the girls were telling the truth.

(Home of Lilliane, her sister and mother – Photo Sid Goldberg 2002)

Did aliens really land in the city of Varginha in Brazil? While the skeptics suggest what the girls saw was a rat-like creature called a capybara, but why would a rat the size of a dog attract the attention of the fire department to tape off the field like a crime scene? Lillian’s mom knows that the girls saw something.

They weren’t the only ones.

The official version from the Brazilian Government is that nothing happened. They denied any claims of being involved in the capture of Extraterrestrial Biological Entities (EBEs) but those who closely researched the event and spoke with many more witnesses, accused the government of a cover-up.

The case could easily have been swept away as an urban legend, if it was not for the following evidence:

NORAD warning of a UFO going down.

Around midnight between January 19-20 NORAD (North American Air Defense Command) contacts their Brazilian counterpart, CINDACTA (I Centro INtegrado de Defesa Aerea e Controle de Trafego Aereo or Integrated Center on Air Defense and Air Traffic Control). They are informed that a UFO is coming down over southern parts of Minas Gerais state. This is witnessed and leaked by both a Brazilian Air Force member and an employee at the radar facility at Air Force Base VI Comar, who received the information.

A UFO is believed to have crashed between 1:30 AM and 5:00 AM that night according to an American civilian who was present when the cigar-shaped UFO was loaded aboard a flatbed truck in the early morning of January 20th, according to Brazil’s UFO Magazine.

But what does all this have to do with a 10-million year old sculpture?

Based upon this artistic rendition of the alien witnessed by the three girls in Varginha, by artist, Thomas Feiner, we created a rubber outfit for the TV recreation scene.

Look very closely at the three ridges along the head of the Varginha EBE that we created for television and compare it to this sculpture brought to the USA by an archaeologist representing the Government Of China who explained to me that these 6-inch jade sculptures were dated to 10-million years old — not the jade itself but the broken crystals where the jade was shaped into a sculpture. The resemblance is too similar to ignore!

(Jade statues that are allegedly 10-million years old  presented by Chinese scientist at the Citizen Hearing For Disclosure, 2013 – Photo by Sid Goldberg)

I asked; “Who was around 10-million years ago to carve these sculptures, and what were the carvings of?”

The archaeologist from China, a representative of the Chinese government then smiled, pointed towards the sky and said; “Why do you think we are called the Dragon people?”

According to Wikipedia, The ancient Chinese self-identified as ‘the descendants of the dragon’ because the Chinese dragon is an imagined reptile that is the evolution ancestor of chi energy and other common animals.[5][6]

So is there a link between these 10-million year old sculptures and the Varginha UFO Incident? Might we have been visited by ET throughout our human history? Look at the pictures and you decide!

UPCOMING: How did the scientists from China date these jade statues to 10 million years?