Is this a video of Planet X or Nibiru? 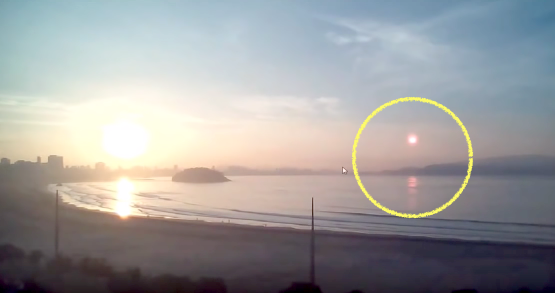 ‘Some kind of mystery object is really there – far beyond the outermost planets’.

It’s most popular name is Nibiru, or Planet X. Others have referred to it as Nemesis or Wormwood.

We know of 9 planets in our solar system, if we include Pluto. Is it possible that a 10th planet exists, and is on such a wide orbit that it is yet to be discovered?

According to Wikipedia, “the Nibiru cataclysm is a supposed disastrous encounter between the Earth and a large planetary object (either a collision or a near-miss) which certain groups believe will take place in the early 21st century. Believers in this doomsday event usually refer to this object as Planet X or Nibiru. The idea that a planet-sized object will collide with or closely pass by Earth in the near future is not supported by any scientific evidence and has been rejected as pseudoscience and an internet hoax by astronomers and planetary scientists.”[2][3]

Other researchers take a different point of view suggesting that “soon after German astronomer (a scientist specializing in the study of matter in outer space) William Herschel discovered Uranus in 1781, scientists noticed that Uranus was changing direction from its predicted orbit. This led them to hypothesize that there was another planet out there, the gravitational field of which was tugging at Uranus. The next planet, Neptune, was discovered in 1841 independently by English astronomer John Couch Adams and French astronomer Urbain Leverrier. The existence of Neptune, however, was not able to totally explain Uranus’s orbital disturbances. Neptune showed movement away from its predicted orbit, as well. The search for Planet X continued.”

He further goes on to state that “7,200 years ago, during the cataclysm known as “Noah’s flood“, “sudden changes in temperature, violent storms and water avalanches from Antarctica broke off from their ‘ice prison’ Dr. John T. Hollin at Maine University (U.S.A.) considers that large pieces periodically came out of the Antarctic ice field creating a huge tide” (Zecharia Sitchin, The Twelfth Planet).”

3,600 years ago, during the Jews’ Exodus from Egypt in the middle of the second millennium B.C., the Earth suffered big cataclysms. “A celestial body that recently entered our solar system – a new comet – came very close to Earth causing the eventual disappearance of the glacier layer“ (Immanuel Velikovsky, “Worlds in Collision“).”

According to another researcher, he posts planetary observations throughout history as follows:

NASA officially recognized the possibility of Planet X, with an announcement that ‘some kind of mystery object is really there – far beyond the outermost planets’.

Is this a video of Planet X, Nibiru, or some other natural phenomenon?

Let us know what you think?