Excerpt from “Forbidden Knowledge – Revelations of a Multi-Dimensional Time Traveler” 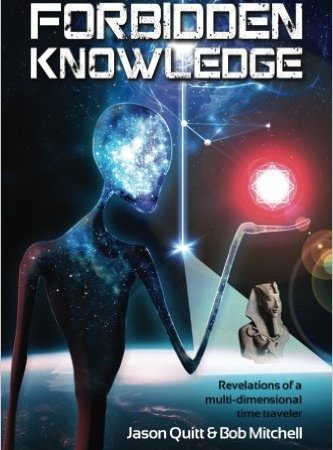 Before Jason Quitt incarnated on Earth he got to choose and view his parents.
“We all do. Most of us just don’t remember.”

Before Jason Quitt incarnated on Earth he got to choose and view his parents.
“We all do. Most of us just don’t remember.”
But Jason isn’t like most people.
He’s a multi-dimensional, planetary time traveler.
He has lived many lives, visited several different planets, com¬municated with numerous species, battled benevolent forces, and possesses forbidden knowledge that has put his life in danger.
He is one of the few incarnated humans with this knowledge. Most die or are killed before they reach maturity by beings and dark forces, who don’t want humanity to know their true place in the world.
They made an unsuccessful attempt on his life in May 2015 af¬ter Jason publicly revealed secret information about what he knew.
The circumstances surrounding what happened to him when he nearly died and the astonishing secrets he possesses about humanity – what and who we are and what really is happening on Earth – will be revealed throughout this book through first hand accounts of his journeys and experiences since his last incarnation on Earth.
While most of us have trouble remembering our early child¬hood, Jason has many vivid memories of his past.
Not only does he remember his childhood but he also recalls a time from another plane of existence before he was physically born into his current life.
So where was this other plane of existence?
It’s a concept that for most will be difficult to comprehend.
Essentially, it’s another realm of existence, but not one to be confused with the place many call Heaven.
“It’s a transitional place that our consciousness exists in before we incarnate again,” Jason explained. “It’s not a physical place. It’s more akin to the astral world.”
Jason recalls his pre-birth memories.
“Early on in my childhood I believed we all had the opportunity to choose our parents before we incarnated here,” Jason said. “These were my first memories when I entered into this world.”
Jason remembers crawling along a hallway with many other in¬fants around him. It sort of reminded him of being in a 1980s air¬port with carpeted flooring.
“Leading us down these hallways were different women,” Jason said. “From my perspective now, these women resembled airline stewardesses. They wore uniforms and were very official looking.
“There were many of us, all different races, naked and crawling down these hallways. The women were directing the flow of babies like it was some kind of baby highway.”
In this recalled memory, the infant Jason seemed to be only a couple months old.
“I’m in a physical human body,” he said.
In his current incarnation Jason has no memories of what hap¬pened immediately before he realized he was crawling down a hallway.
“The only memory before this was being in darkness and then moving out of the darkness through a doorway and suddenly being in the physical form of a baby,” Jason said. “I’m crawling on my hands and knees.
“But this memory of crawling as a baby might not be what it ac¬tually was. But from a baby’s mind with no real perspective of what life and death is, this is what I was allowed to perceive.
“But I was now in human form. It was the concept my baby mind could understand.”
As he crawled with the other children one of the women direct¬ed him to go down another hallway and said to him, “It’s time for you to choose your parents.”
An overwhelming feeling of joy and happiness came over him.
“It was as if I was happy to be doing this trip again,” Jason said. “I was super excited.”
The woman then guided him to one of many doors in this hall¬way. She then opened the door for him. This door was very small and built so that only a child could enter.
“This room reminded me of a movie theater. It was very big and dark with high ceilings,” Jason said. “As I looked in front of me a circular portal of light opened and I sat down in front of it.”
Various images and scenes of his soon-to-be parents suddenly appeared within the portal.
“I was able to view my parents before they were married,” he said. “I saw them before their wedding and at their wedding. I al¬ready had the knowledge that I had selected them before this mo¬ment. That I had chosen them to be my parents.”
Once again he felt nothing but love and happiness.
“I felt so happy to see my future family,” he said. “I felt very connected to them.”
After watching them for some time he suddenly found himself being pulled towards them.
“It was as if I was being pulled right through the portal,” he said.
But this wasn’t the moment of his birth, or more accurately, his rebirth.
None of the images he saw showed his mother pregnant. In¬stead, his consciousness, his soul, was being implanted within the fetus his mother was carrying.
Once he was old enough to talk Jason would often tell his moth¬er, “Aren’t you happy I chose you?”
His mother would smile and tell him that she was even though she was understandably unaware of the significance of what he was actually saying to her.
“It was always on my mind as a young child,” he said. “My mother just thought it was something sweet that her child was say¬ing to her without any deeper understanding of where it was com¬ing from.”
Now you must remember that as a young child Jason thought these memories were completely normal. He thought everybody chose their parents.
“I thought it was something everybody did,” Jason said. “That everybody knew and experienced.”

As he grew into adulthood he would start to recall many past lives and many rebirths.
His rebirth wasn’t instantaneous most of the time although he recalls one memory of life, death and then rebirth all occurring at the same moment.
It involved an ice world.
“It could have been somewhere in the Arctic as far as I know,” Jason said. “I remember I was running on the ice and it was crack¬ing beneath me.
“I was terrified. And then suddenly the ice cracked open and I fell into the water. The current was so strong that it pulled me down very quickly.
“I remember thinking that this was it, I was going to die. But then my entire body was filled with warmth. Then everything turned black.”
The next thing he experienced was the sound of him crying as a baby.
He was in his next incarnation.
“I had experienced an almost direct transition from death to life again through my birth,” he said. “But what I have learned is that instantaneous incarnation is rare.
“It happens but it can take many years, even hundreds of thou¬sands of years for those who choose to incarnate or be reborn al¬though time isn’t the concept that we think it is.”
Jason would later learn that we all choose our parents based on very specific reasons.
“But genetics and location are the most important,” he ex¬plained. “Our essence is looking for the right vessel in order to ac¬cess specific genetic traits. Once found these traits can be activated and enhanced as we age.
“We are also looking for the right type of life-stream and expe¬riences to work out the karma that we carry forward from our past lives and ancestry. This is to allow for our consciousness to evolve with our given life path.
“We also incarnate in soul groups. All the people I have close contact with today such as my family and my friends have all had
past lives together. It’s almost like having familiar energy around you right from the start.”
Jason would also learn that our consciousness can insert itself in the past as well as in the future.
“Time doesn’t exist in the way we perceive it to,” Jason said. “Time is more like a physical object than a concept. The past has already happened and so has the future.
“But we just don’t realize it.”
When we are reborn our memories are wiped clean so that we can experience our new lives. But certain people retain some mem¬ories in order to put them on the right path.
“We choose our entire path in this world before we are even born,” Jason explained. “At specific points in our lives memories will appear, gifts will awaken and events will unfold that will shift us and guide us on the path we have chosen to walk. This is to keep us in the right direction for us to fulfill our purpose here.
“There is also a higher awareness guiding us down our paths that gently or not so gently help us along even when we stray from the path.”
Jason was raised Jewish although his family wasn’t particu¬larly religious.
“I never really had any religion imprinted on me,” he said. “But I always knew that all of us were reincarnated souls. That everybody had past lives and that we are all connected to a source. Nobody needed to tell me this. I just knew.
“For me this was normal and that’s why despite this knowledge as far as I was concerned I lived a normal childhood.”
However, his adult life would be anything but normal.