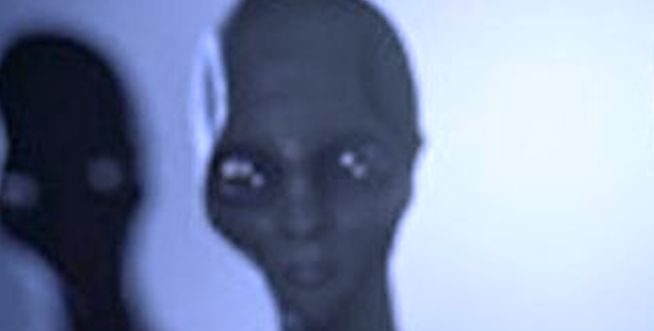 Cold spots, elevators and doors that mysteriously open and close by themselves…

What could be weirder than a space alien?

How about an alien ghost?

This is the crux of a story told to me a few years ago by about a dozen employees of the New Mexico Rehabilitation Center (NMRC) located in Roswell, most famous for the controversial crash or crashes in July, 1947.

But first, some quick history.

According to the legend of the 1947 Roswell crash (see my book Alien Agenda for more details), alien bodies were initially taken to the Roswell Army Air Field hospital before being warehoused in one of the base’s hangers. It is rumored that at least one of them died while at the hospital. The bodies reportedly were then transported to other more secret locations. Both Wright-Patterson AFB and the notorious Area 51 have been mentioned.

One of the Roswell witnesses was Glenn Dennis, then a mortician working for Ballard’s Funeral Home. Dennis said about 1:30 p.m. July 5, 1947, he received a call from the Roswell base mortuary officer asking if the funeral home could provide a number of small caskets which could be hermetically sealed. Dennis said he realized something strange had occurred when the officer called back and asked how to prepare a body which had been burned or left out in the elements for a time.

Later that day, Dennis drove an ambulance to Roswell Field to deliver an injured airman. At the base hospital he saw strange pieces of wreckage in the rear of an ambulance but soon was chased off by an officer, who told him not to talk or “somebody will be picking your bones out of the sand.” A few days later, Dennis said a nurse friend told him she was called in to assist in the autopsy of three “foreign bodies” that gave off an overpowering odor. She said the bodies were small with large heads and hands with four fingers ending in pads which looked like suction cups.

With the September passage of the National Security Act of 1947, the old Army Air Corp became a separate branch of service and was renamed the United States Air Force. By the early 1950s, Roswell Army Air Field had become Walker Air Force Base and the old wooden base hospital was replaced with a new brick structure.

In 1967, Walker AFB was closed and the base hospital sat empty until it was utilized by the state as the New Mexico Rehabilitation Center. Later satellite photo analysis showed the location of the center’s haunted floor was the exact location of the old Roswell AAF base hospital’s surgery ward.

This is where I found myself some years ago taping a television documentary on, of all things, the Kennedy Assassination. The reason for filming in Roswell is simple. The people are friendly and cooperative, the climate is generally dry, costs are much lower that other parts of the country and the place is a treasure trove of old items from years past — clothing, cars, military equipment, you name it.

Indicative of the cordial nature of the people there was the warm welcome we received from John Cooper, executive director of NMRC. But the story really got moving with comments from his assistant Jacqueline Allen.

Mrs. Allen told me that the film crew could have free access to one wing on the second floor as it was being used mostly for storage. “None of the personnel want to work there,” she commented.

“Why is that?” asked this old reporter.

“Because of strange and unexplained incidents which have occurred there,” responded Mrs. Allen.

My journalist hackles quickly rose and sent me on an investigation of the strange story of the haunted hallway at what once had been the Roswell base hospital.

Josie Morones, then a night nurse tech at the rehabilitation center, has seen the apparition twice.

“It was kind of shocking,” she said. “And it happened twice. The first time I saw this thing I didn’t tell anyone because I figured they would think I had gone crazy. But after I saw it a second time, I realized that this was real, so now I don’t mind talking about it.”

She said the two sightings occurred within two weeks of each other in the summer of 1997. Interestingly enough, this was the time of the first major UFO convention in Roswell.

“I was in this little kitchen area getting a cup of coffee late at night,” related Morones. I suddenly felt some kind of force holding me down. My skin was crawling. I looked up at this steel cabinet with glass doors and saw this thing reflected in the glass. I thought I was seeing things but when I turned around, it was still there.

“I saw this figure no more than five feet tall with a big old head and hands that had no fingers. They looked like mittens. Then it just faded away. I didn’t say anything about this at the time.

“But about two weeks later I saw it again and called to a coworker named Nino. Later I asked her if she had seen it and she said yes. I drew a picture of what I had seen and showed it to her. She agreed that that was what she had seen.”

Morones described the figure as short and wrapped in some type of shiny cloth tape. “Sort of like a mummy,” she said. “It was definitely not human.”

Emma Duran has been at the NMRC switchboard for 17 years and she has heard several stories of ghostly figures seen in the hallway of the second floor in the area where the operating theaters were once located.

“I used to work the 3 p.m. to 11 p.m. shift,” she said. “We would hear footsteps up there. But when we called maintenance, they couldn’t find anyone.  The elevators would open and close but nobody would be there.

“Several times the lights were on and the maintenance men went up there and turned them off. But by the time they got back down the hallway to the elevators, the lights would be back on again.”

She said that several patients in the past reported seeing a strange figure in the upstairs hallway. “They would describe someone who looked like a pilot, you know, like wearing a World War II leather flying helmet. They would see his sort of wave or give a little salute and then disappear. They named him ‘Mr. Scratch’.”

When I asked maintenance man David Rocha about any apparitions at the facility, he said, “Oh, you want to know about old Scratch.”

“It’s pretty spooky,” confirmed Rocha, who worked for the NMRC for more than 22 years. He recounted an experience some years back when all employees were sent home for the Christmas holidays except for himself and a few others who served as a security detail.

“We had to make security rounds all through the day and night,” said Rocha. “It was weird. We heard footsteps, doors slamming and elevators opening and closing but no one was there. I didn’t like that.”

He added that most of the time the building was so silent “you could hear a pin drop,” which made the odd noises all the more startling.

Rocha’s account was supported by Dan Owen, a systems analyst at NMRC. “I’ve seen doors suddenly open and close but there was no one there,” said Owen, who agreed that stories like this have circulated through the facility for many years. “It all seems to take place on the second floor near the room where they supposedly did an autopsy on the aliens.”

Mrs. Allen, who has worked at the NMRC for 14 years, said a nurse technician who worked the night shift once told her of seeing a small figure standing at the end of the second floor hallway.

“It was at the time of the first big Roswell UFO meeting [1997],” she explained. “A bunch of us were talking about all that and I commented, ‘I would like to see one of them.’ This nurse then told me she thought she had seen one in the hallway.

“He was looking at her and then turned and walked off…just disappeared. I understood from her that it was an alien. It was not human. But then it went away. I was under the impression that this happened more than once.”

Mrs. Allen said she too had heard such accounts from many others over the years that included the elevators mysteriously opening and closing, lights going on and off and even personnel encountering areas of intense cold.

She added that she was born on a ranch at Corona near Roswell and that she remembers older residents talking about the 1947 crash and alien bodies. “I believe in all this stuff,” she said with a small hesitant laugh.

Another believer is Mary Rodden, who now serves as director of staff development at the NMRC. From 1971 to 1975, she worked as assistant director of nurses and she too heard the stories of Mr. Scratch.

I’ve worked a lot of night shifts and you do hear strange sounds,” she confirmed.

She also said her father-in-law, Woodrow Jack Rodden, had a contract with the Roswell base in 1947. He was a photographer and processed pictures for the base which had no photo lab of its own.

According to Mrs. Rodden, her father-in-law processed pictures taken of both the crash debris and bodies for the military. He was then sworn to secrecy.

“He never talked about this with us,” she said. “He had a complete personality change following the events in 1947. But I do recall the one thing that he told my husband. He said, ‘They killed it.’”

I asked Mrs. Rodden if she thought he meant that the authorities had killed the true story. She smiled and said, “No, I think he meant they killed one of them.”

Owen, who has both seen and heard strange things in the NMRC, said he had never encountered the alien ghost but nevertheless added, “I’ve heard people say they have seen aliens running around.”

It appeared that NMRC employees declined to speak about these matters openly out of concern for the current patients and fear of ridicule.

And that’s the story. I did not have time to track down further accounts although I was assured I could have found them.

Cold spots, elevators and doors that mysteriously open and close by themselves and diminutive ghostly apparitions that appear in the hallway where once stood the Roswell Army Air Field hospital — overheated imaginations or an alien ghost?