Grant Cameron on the Rockefeller Initiative 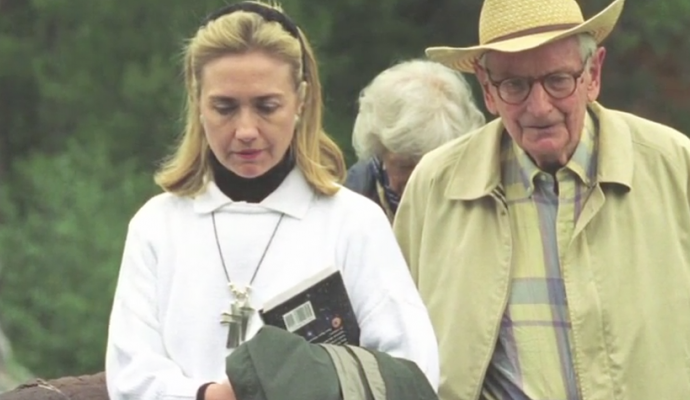 In a November 1, 1995 from Rockefeller’s lawyer to the president’s science advisor it is out that Hillary and her staff have been helping Rockefeller edit a draft of a letter to the President called “Lifting Secrecy of Information about Extraterrestrial Intelligence as Part of the Current Classification Review.”

My name is Grant Cameron. I am a private UFO investigator. For the past 38 years I have attempted to focus on what the highest levels of the US Government, military, and intelligence agencies know about the UFO phenomena. I am the Director of the Presidents UFO Website and the co-author of the recently released book “UFOs, Area 51, and Government Informants.”

My Rockefeller Initiative testimony is based on 1,000 pages of documents that were released to me in 2001 by the Clinton White House in response to an FOIA for UFO files. It should be noted here that these documents can no longer be found by either the Clinton Library or the National Archives. The documents however, are preserved on the Presidents UFO and the Paradigm Research Group websites.

The FOIA documents show that billionaire businessman Laurance Rockefeller approached the Clinton White House to get the government to disclose the truth behind the UFO mystery. Rockefeller also had meetings others outside the White House Initiative such as with Rep Steven Horn (R-Ca) from the Government Reform and Oversight Committee related to government secrecy.

Rockefeller’s request for UFO disclosure was dealt with in the White House by the President’s science advisor Dr. Jack Gibbons.

To prepare for the first March 1993 meeting with Rockefeller Dr. Gibbons requested a UFO briefing from the CIA. That briefing was tasked at the CIA to Dr. Ronald Pandolfi who is the man rumored in the UFO community as the agency expert on UFO, and a man who has over the last 20 years repeatedly interacted with many researchers inside the UFO community.1

As the CIA has a public position of no UFO involvement, Pandolfi gave the job of writing the White House briefing to a private UFO researcher, Mr. Bruce Maccabee, who had done a couple of UFO lunch time talks at CIA headquarters. The briefing therefore became not an official briefing on the subject but the personal opinion of one researcher inside the research community.

Rockefeller exerted great pressure on the Clinton White House threatening to write an open letter demanding UFO disclosure from President Clinton and to make this demand public in a full page ad in all the major newspapers in the United States. Under this pressure Dr. Gibbons agreed to try and get some sort of disclosure on the UFO subject. He asked Mr. Rockefeller to pick one case that could be declassified and then all the rest of the covered up material could be dealt with. Mr. Rockefeller picked the 1947 UFO crash at Roswell as the case to investigate, and that is one of the reasons that there was a reinvestigation of the Roswell crash by the USAF in 1994.

At the same time the White House was green lighting a reinvestigation, the Government Accountability Office (GAO) was also doing a reinvestigation of the Roswell crash. That investigation was initiated by New Mexico congressman Steven Schiff who had ordered the GAO investigation after his requests for information were stonewalled by Clinton’s first Secretary of Defense Les Aspin.

The GOA study, however, was quite limited. Only FOIA replies on the Roswell crash were used, and nothing was found except that a bunch of key Roswell Army Air Field documents from the time of the crash that were missing. The GAO offered no conclusion.

The USAF reinvestigation discovered a way to bypass an actual investigation of the crash. Rather than following the testimony of many of the witnesses they simply published a final report stating that the whole 1947 crash event has been caused by the launch of a Mogel balloon designed to monitor a possible Soviet nuclear test.

In a November 1995 Belfast Northern Ireland speech President Clinton challenged the official USAF Roswell report which had no discussion of the reported alien bodies. He stated,

As far as I know, an alien spacecraft did not crash in Roswell, New Mexico, in 1947. …but if the United States Air Force did recover alien bodies, they didn’t tell me about it, either, and I want to know.

This open challenge forced the USAF to do a second Roswell crash report. The Air Force released this report to a room of laughing reporters as they described how 6 foot tall wooden dummies dressed in Air Force uniforms in 1953 somehow explained what people had described as small 4 foot grey creatures in 1947, including one alien that was still alive. The report was the USAF’s lame reply intended to answer Clinton’s challenge about the alien bodies mentioned in Belfast.

The mention of Hillary name at the 1995 briefing is important because the Rockefeller Initiative documents show that Hillary played a key role in the Rockefeller White House interaction on UFOs. There are two key documents

1. In a November 1, 1995 from Rockefeller’s lawyer to the president’s science advisor it is out that Hillary and her staff have been helping Rockefeller edit a draft of a letter to the President called “Lifting Secrecy of Information about Extraterrestrial Intelligence as Part of the Current Classification Review.”2

In 2006 the initiative faded out and Rockefeller moved on to fund other UFO research initiatives.

In 2005, during a question and answer session following a presentation to an Asian investment group in Hon Kong President Clinton was asked about passing secrets from one President to another and about the UFO crash in Roswell. In reply Clinton stated that he had looked into the Roswell UFO crash, and had reviewed the documents. I did attempt to find out if there were any secret government documents that revealed things. If there were, they were concealed from me too…Clinton said, “I’m almost embarrassed to tell you I did (chuckling) try to find out.”1

He also stated that many people in his administration had believed the Area 51 story of craft and a live alien, so he had looked into that. He stated that he had not been able to confirm either story as true. Sadly, however, President Clinton did add, “I am probably not the first President they kept in the dark, or that bureaucrats have tried to wait out.”

The Rockefeller Initiative was part of a larger effort inside the Clinton administration to get answers on the extraterrestrial question.

This is backed up a private conversation that President Clinton had in 2007 with Hollywood producer and writer Paul Davids stating that he is “fascinated” by the subject of UFOs. It is also backed up by an account told by Bill Clinton’s friend Webster Hubbell who wrote in his 1997 book “Friends in High Places” that when Clinton appointed him assistant attorney general he asked him to find out “who killed JFK and are there UFOs.” It appeared that Clinton did not believe the official government versions on either of these subjects, and wanted a second opinion.

One of Clinton’s main allies in the effort to get openness in government was his Chief of Staff John Podesta. Podesta, like Clinton, was very interested in UFOs and in openness on the issue.

He and the President made an attempt to open up as many classified files in government vaults as possible. This initiative became Executive Order 12958 which was signed in 1995. The EO introduced the 25-year rule which hoped to bring to light many hidden secrets in government like the UFO issue. What was sought was a proper balance of “openness in government” vs. what Podesta coined as “unthinking secrecy.” Podesta stated “our founders knew that democracy cannot function in the absence of public information.” He noted the importance of “balancing the vital interests of national security with the genuine claims of public openness . . .For over two centuries, we have prospered and won because — at our best — we have found ways to do both.” To achieve this balance the Clinton EO set up a policy that all government documents would be declassified after 25 years except in exception circumstances.

The EO had exceptional success in moving government documents into public view. Between 1995 and 2000, 800 million pages of documents were declassified, compared to 188 million documents in the 15 years previous. Unfortunately, the sought after UFO documents escaped the declassification effort.

In 2002, Podesta would make a public statement asking for openness on the UFO issue stating “I think it’s time to open the books on questions that have remained in the dark, on the question of government

Another ally in getting openness regarding UFOs was Clinton’s Secretary of Energy, Bill Richardson who has made many pro-UFO disclosure messages over the years. For example, writing in a forward to a book on the Roswell UFO crash when he was Governor of New Mexico Richardson wrote, “Clearly, it would help everyone if the U.S. government disclosed everything it knows. The American people can handle the truth — no matter how bizarre or mundane. … With full disclosure and our best scientific investigation, we should be able to find out what happened on that fateful day in July 1947.” 3

Then, in a Q &A when he was running for President Richardson talked about his long history of attempts to get answers on UFOs. “I’ve been in government a long time, I’ve been in the cabinet, I’ve been in the Congress and I’ve always felt that the government doesn’t tell the truth as much as it should on a lot of issues. When I was in Congress I said (to the) Department of Defense … What is the data? What is the data you have? I was told the records were classified. That ticked me off.”