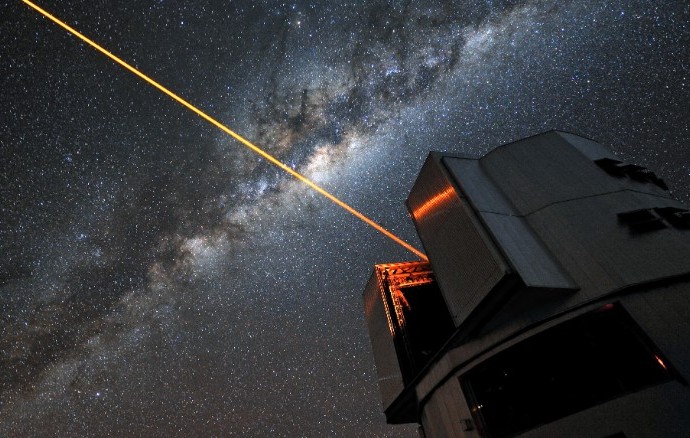 One might expect to read the headline “Lasers could hide Earth from deadly aliens, 2 astronomers say” on a conspiracy website sensationalizing fictitious alien reports. Instead, the mainstream news organization CNN just posted this article on its Home page. The question begs to be asked: Why?

Until recently, news about possible alien invasions was the journalistic folly of the most hoax-worthy UFO websites whose credibility factor on a scale of 1 to 10 would probably be a big fat zero! Yet CNN quotes a paper recently published in the prestigious Royal Astronomical Society about how our Earth can cloak itself from other intelligent life that may want to exploit our planet for its natural resources. One need not look to aliens from across the solar system for the exploitation of Earth’s natural resources. That can already be found a lot closer to home, but I digress…

The fact that two astronomers from Columbia University are proposing that “Earth use lasers to hide itself from potential alien foes” and “prevent the potential annihilation of the human race” is hugely significant. After all, if the official position from our governments has always been one of denial when it comes to the topic of UFOs or aliens, why in the world are scientists and scientific resources being allocated to produce defence strategies and viable technological responses to possible threats from “deadly aliens” when they supposedly don’t even exist? Equally noteworthy is that mainstream media is finally reporting on this topic seriously and respectfully without the usual dismissive attitude that has been the rule of thumb concerning reports of this genre.

Is something shifting whereby the government is subtly disclosing, perhaps even testing the public waters to see our response via the mainstream mouthpiece?

Look at the late night CBS hit series, Jimmy Kimmel Live! In the past 24 months almost to the day, President Bill Clinton, President Obama, and Presidential hopeful Hillary Clinton shared the following perspectives on this show.

April 2014 – Bill Clinton: “If we were visited someday, I wouldn’t be surprised, I just hope it’s not like Independence Day, the movie, that it’s a conflict. May be the only way to unite this increasingly divided world of ours. If they’re out there, think of how all the differences among people on earth would seem small if we felt threatened by a space invader…”

Then in March 2015, Jimmy Kimmel tells President Obama that if he was elected President, Kimmel would want to find out everything about aliens and Area 51, to which President Obama responds; “The aliens won’t let it happen. You’d reveal all their secrets, and they exercise strict control over us,” Obama said. “I can’t reveal anything.”

When Kimmel continued on the topic, telling Obama how Clinton claimed to have looked into government files on UFOs and found nothing, Obama responded, “Well, you know, that’s what we’re instructed to say.”

More recently in March 2016, Democratic candidate Hillary Clinton announced that she will release government-held UFO files to the public if she is elected President. She told Kimmel to an audience of millions;

“I’m going to do it again. There’s a new name for UFOs. It’s Unexplained Aerial Phenomena. That’s the new nomenclature. I would like us to go into those files and hopefully make as much of that as public as possible.

This is not the first time the Clintons have been linked with aliens.

When Bill was President between 1993 and 1996, he was approached by the late billionaire philanthropist Laurance Rockefeller to release UFO files as part of the ‘Rockefeller initiative’.

Hillary was also involved in the talks.

“The only circumstance under which a leading presidential candidate, her president husband and their common advisor would repeatedly speak to the ET issue during a campaign is when their collective brain is fully aware the ET presence is fact.”

This is in striking contrast from only 3 or 4 years ago when the very mention of “Area 51” or “aliens” to any political or military figurehead would inspire a response of contemptuously dismissive laughter or blatant denial. To have the most powerful leaders of the most powerful country in the world acknowledge Area 51 and aliens openly, even in the setting of a comedy late night talk show, is significantly historic.

The public, through these casual conversations of lighthearted banter, is slowly being conditioned away from the dismissive attitudes of  “conspiracy theory” to truthful acknowledgement of conspiracy fact. Intelligent life beyond our own territorial boundaries is out there. The old paradigm that humans are uniquely alone in the universe is no longer viable.

So could lasers hide Earth from deadly aliens? Quite probably aliens already know we’re here and chances are… they are here too.