Why is Hillary Clinton openly discussing UFOs, Area 51 on the Jimmy Kimmel Show? 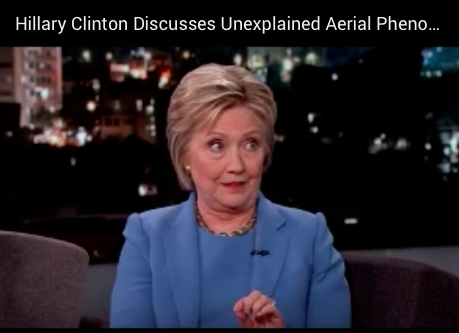 Former President Bill Clinton and President Obama recently appeared on ABC’s The Jimmy Kimmel Show. Both were asked about UFOs and Area 51.

Now this week again (March 24, 2016) in front of a national audience of millions, Jimmy Kimmel asks Hillary Clinton pretty much the same question about looking into UFOs and Area 51. As a seasoned television professional myself I can promise you that nothing is discussed on national TV talk shows, especially when it comes to he Office of the President, without the questions being vetted first, and the answers prepared in advance.

As to why “UAPs” (as Clinton corrected Kimmel when he used the acronym, UFOs) is being openly discussed at this time is fascinating. It is clear that the public, through the media, has been increasingly more acclimatized to the ET topic compared to the negative stigma that used to be associated with the very mention of the term, UFO. Are we getting immanently close to the “Disclosure” that Steve Bassett and other respected experts on the topic have been discussing for so many years now?

The shift away from humiliating dismissiveness as a response to something plausible is truly a new paradigm, and this interview legitimizes the ET topic more so than any other high profile American politician.

Why do you think the leading democratic candidate running for the highest office of the nation engaged in this UAP/UFO discussion?

Watch the video here and see for yourself: