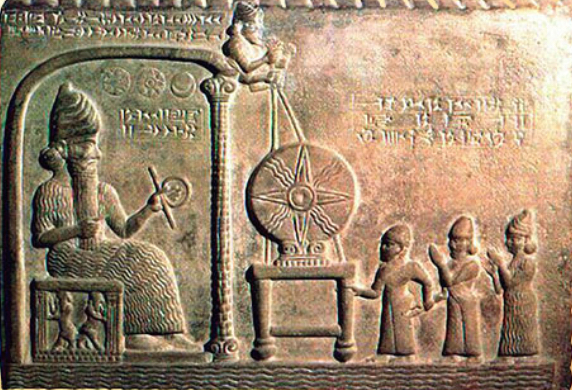 A growing number of researchers are becoming quite serious about the concept of Ancient Astronauts, the idea that non-humans visited the Earth millennia ago.

Throughout history the two most prominent methods for controlling the human population have been religion and finance. These well-honed control mechanisms appear to be of extraterrestrial origin.

Early humans, seeing the beauty and symmetry in nature, instinctively knew that some guiding force lay behind the order of life and so they developed a reverence for spirituality. Over time, and with the advances of scientific knowledge, the material trappings of the various religions should have fallen away.

But they haven’t. Today, most of the world’s population continues to follow one religion or another, often leading to conflict, wars and genocides. What is it that has made religion so important in the minds of so many?

One possibility is that going back to its origins, religion may have been based on a reality that has been lost today. According to ancient Sumerian tablets, the Old Testament, Egyptian papyrus and the accounts of the Greek and later Romans, there was a time when humans experienced face-to-face encounters with their gods. Virtually every ancient culture in this world contains legends of gods who came from the sky and taught them fundamentals of civilization — language, mathematics, astronomy, chemistry, law, and architecture. Today, a growing number of researchers are becoming quite serious about the concept of Ancient Astronauts, the idea that non-humans visited the Earth millennia ago, a concept first advanced in the 1970s by writer Erich von Daniken. The evidence for such visitation – in sacred sites, ancient art and anomalous artifacts – is quite compelling, in fact almost overwhelming.

Initially, our primitive ancestors most likely felt awe and reverence toward technologically advanced visitors who came from the heavens. After all, no human could fly or perform feats that must have seemed like magic? The first humans thought of these visitors merely as watchers or messengers from the heavens. Only after these visitors, called in the ancient cuneiform tablets of Sumer, the Anunnaki, or “those who came to Earth from the heavens,” appointed rulers over humanity did the concept of organized religion come into play.

Rather than deal directly with the burgeoning human population, the ancient gods ordained an administrative body or priesthood to pass along edicts and instruction as well as interpret policy. Once such clerics got a taste of wealth and power, they were loath to relinquish it. Religion soon evolved into a rigid structure of dogmas, catechisms, tithing, and obedience.

“Apparently, these extraterrestrials performed ‘great feats’ in order to be worshipped as ‘gods’. The reported next step was to provide technology to these Earth humans so that these humans could create impressive looking ‘rich’ structures of religious worship, laid with gold and other mined mineral resources, of religious worship to these extraterrestrial ‘gods,’” wrote researchers Peter Jiang and Jenny Li in The Canadian.

By the time of the earliest recorded human civilizations, such as Sumer, Assyria and Babylon, religions were well established and had merged with the prevailing political structure. Certain civilizations had firmly established the idea that the clergy could be the only religious authority and that kingship was a divine right. Anointed priests who worshiped one god exhorted their followers to demonize the worshipers of the others. And anyone who failed to offer allegiance to their one true god was castigated as a blasphemer, heathen, devil worshiper or worse.

But as the physical gods – the earlier visitors — dropped from sight, the religions they created turned metaphysical. The concept of God evolved from a physical being to an omnipresent yet anthropomorphic supernatural entity. The elder conflicts between the ancient astronauts became a metaphor for ancient wars. It was a struggle between the new monotheistic God and his evil counterpart, Satan. Baptist minister and author Paul Von Ward wrote about the development of supernatural religion beginning less than 3,000 years ago in Mesopotamia (now Iraq), the cradle of civilization. “Here religions that grew out of absentee-[Advanced Being]-cults that described their gods as immortal, magical beings took the next step toward supernaturalism,” he wrote.

Originally the term Satan merely meant any adversary to the gods. Princeton Professor of Religion Elaine Pagels argued that Satan came to represent human hostility against other humans. “And it’s no accident that the foundational texts of Christian tradition – the gospels of the New Testament, like the Dead Sea Scrolls – all begin with stories of Satan contending against God’s spirit,” she added. Pagels explained that Christians later “turned the image of Satan against a far wider range of targets – against the Roman empire and its government, which persecuted Christians, and then against other ‘intimate enemies’ – other Christians who dissented over established theology, whom they called ‘heretics.’

Von Ward elaborated on Pagels by stating, “[H]istory makes it clear that the Hebrews had simply followed the example of their patron god. They labeled their opponents, foreign or domestic, Satanic worshipers of Beelzebub, Belial, and the Princes of Darkness. In return, their opponents likely shouted their own epithets of ‘infidel’ (meaning ‘unfaithful to the “true” god’).”

According to Von Ward, a “confluence of historical events” provided the basis for western supernaturalism near the end of the Roman Empire. These events included the development of absentee non-human cult worship in the Middle East; the Hebrew worship of Yahweh, who was believed to be the leader of the olden gods; and the new and compelling reformation cult of Jesus of Nazareth. Von Ward also attributes the rise of supernaturalism to the simultaneous rise of powerful institutions—for instance, Roman organizational skills utilized in the creation of a Christ-centered church, the power of Rome to elevate Paul’s Christian cult to the status of the state religion, and the Nicean council of bishops that “culled from competing texts a Bible that largely excludes references to the reality of other [Advanced Beings] and Jesus’ humanity.”

Generations of humans slowly developed a defense mechanism once the ancient gods were no longer visible. “The Anunnaki had apparently decided to go about their own affairs, but humans felt bereft at being deserted. So supernatural theology was the defense mechanism created to help cope with the pain and anxiety of an obvious separation of humans from their gods. One of its purposes was to assure humans that the religious rituals would either bring the departed gods back to Earth or reconnect the humans to them in the supernatural realm,” Von Ward explained.

Furthermore, in both early Eastern and Western cultures, rulers gained power and wealth from religion. But, with the Age of Enlightenment and the advent of the printing press, religion waned, especially in highly-developed nations. Now the favored method of control is through the financial system — money. And this control mechanism came initially through the Church.

The Hebrew Mogen David, or Star of David, is of Babylonian origin and is indicative of how the Babylonian/Sumerian culture was blended with Hebrew religion during their captivity in Babylon. And it was in the Temple at Jerusalem that Jesus, the Prince of Peace, turned violent against the money changers there, not in some bank.

Author Joseph P. Farrell saw the development of the private issuance of bullion-based monies both in ancient times and in various cultures as suggesting “the evident hand of a hidden international class of bullion-brokers, war merchants, slave traders, and mining operators, for almost invariably, the pattern is the same.” The pattern involved blending finances with the prevailing religion as if money was God ordained. Money remains a powerful control mechanism over humanity.

Farrell has argued that the methodology of aligning religion with money went something like this: Rulers would penetrate and ally with the Temple, issue false receipts, substitute bullion for Letters of Credit as a measure against the false receipts, and thus create a facsimile of money. “Thus, we arrive back at the state of issuing false receipts, only in this instance, these receipts are neither false nor counterfeit, they are simply privately created notes or promises to pay a certain amount of bullion (which they also controled). Thus, once again the money supply is not only expanded, but the use of such instruments actually served to allow the bullion brokers to circulate more of such notes than they had actual bullion to redeem. The key, once again, was the sanctifying probity that the temple association gave them. With this step their power and influence over the various states which they penetrated was almost complete, for it gave these ancient bankers, like their modern counterparts, the ability to expand or contract a state’s money supply and to control their economies to create boom or bust.”

The power of exchanging money can be traced back to Palestine where people called moneychangers were prevalent in exchanging the currencies of the various cities and nations into money acceptable to the temple priests. Money therefore became closely connected to the temples of religion which also doubled as centers for the study of astronomy and astrology.

The strategy and practices of such a banking elite coupled with religion since ancient times has involved war, slavery (whether physical or financial), starvation, usurpation of the money-creating power of the state, the invention of debt-as-money, and economic cycles coupled with astrology.

And it all originated from beyond Earth.