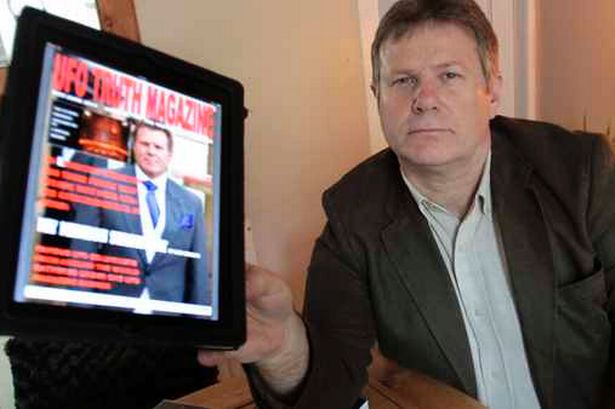 “Saucers exist (I saw two). They were intelligently flown or operated (evasive tactics, formation flight, hovering). They were mechanisms, not United States weapons, nor Russian. I presume they are  extraterrestrial.” Lt. Colonel Richard Headrick, radar bombing expert, 1959.  “Behind the scenes, high-ranking Air Force officers are soberly concerned about UFOs. But through official secrecy and ridicule, many citizens

“Saucers exist (I saw two). They were intelligently flown or operated (evasive tactics, formation flight, hovering). They were mechanisms, not United States weapons, nor Russian. I presume they are  extraterrestrial.”
Lt. Colonel Richard Headrick, radar bombing expert, 1959.
“Behind the scenes, high-ranking Air Force officers are soberly concerned about UFOs. But through official secrecy and ridicule, many citizens are led to believe that unknown flying objects are nonsense.”
Former CIA Director, Roscoe Hillenkoetter, public statement, 1960.
“My own present opinion, based on two years of careful study, is that UFOs are probably extraterrestrial devices engaged in something that might very tentatively be termed ‘surveillance’.”
Dr James McDonald before Congress, 1968.
“These UFOs are interplanetary devices systematically observing the Earth, either manned or under remote control, or both.”
“Information on UFOs, including sighting reports, has been and is still being officially withheld.”
Colonel Joseph J. Bryan III, founder member of the CIAs psychological warfare staff, advisor to NATO.
“This was no ordinary UFO. Scores of people saw it. It was no illusion, no deception, no imagination.”
Air MarshallAzim Daudpota, Zimbabwe speaking about a UFO sighting over the country in 1985.
“More than 10,000 sightings have been reported, the majority of which cannot be accounted for by any ‘scientific’ explanation, eg that they are
hallucinations, the effects of light refraction, meteors, wheels falling from aeroplanes, and the like…. They have been tracked on radar screens… and the observed speeds have been as great as 9,000 mph. I am convinced that these objects do exist and they are not manufactured by any nation on earth. I can therefore see no alternative to accepting the theory that they come from an extraterrestrial source.”
Air Chief Marshall Lord Dowding, Commanding Officer of the RAF during WWII.
“I am convinced there was thought behind the thing’s manoeuvres.”
Lieutenant George Gorman, F51 pilot after being in a 30 minute dogfight with a small UFO in 1948.
“UFOs are real and they may come from outer space…photographs and various materials show scientifically that there are more advanced people piloting the saucers and motherships.”
General Kanshi Ishikawa, Chief of Air Staff, 1967.
“Air Force interceptors still pursue UFOs as a matter of national security to this country and to determine technical aspects involved.”
Major General Joe W. Kelly, 1957.
“Something is going on in the skies… that we do not understand. If all the airline pilots and Air Force pilots who have seen UFOs and sometimes chased them… have been the victims of hallucinations, then an awful lot of pilots should be taken off and forbidden to fly.”
Captain Kervendal, French Gendarmerie.
“The Air Force had put out a secret order for its pilots to capture UFOs. For the last six months we have been working with a congressional committee for investigating official secrecy concerning proof that UFOs are real machines under intelligent.”
Major Donald Keyhoe, during a live TV broadcast on CBS in 1958 in which he was pulled from the air when he began to deviate from the prepared format of the programme.
“It appears to be a metallic object…tremendous in size… directly ahead and slightly above… I am trying to close for a better look.”
Captain Thomas Mantell, USAF. These were his last words as he closed in on a UFO in 1948. Minutes later his plane was to crash and he was to lose his life.
“I was amazed at what I saw. The amount of debris that was scattered over such an area…The more I saw of the fragments, the more I realized it wasn’t anything I was acquainted with. In fact, as it turned out, nobody else was acquainted with it…There was a cover up some place about the whole matter.”
Major Jesse Marcel. US Army Intelligence Officer. Extract taken from a video interview. This testimony is a direct contradiction to the testimony of the Air Force regarding the nature of the recovered debris at Roswell in 1947.
“Flying saucers are real. Too many good men have seen them, that don’t have hallucinations.”
Captain Eddie Rickenbacker. World War I air ace.
“UFOs sighted in Indonesia are identical with those sighted in other countries. Sometimes they pose a problem for our Air Defence and once we were obliged to open fire on them.”
Air Marshall Nurjadin Roesmin, Commander in Chief of the Indonesian Air Force in 1967.
“The most spectacular UFO incident in Indonesia occurred when during the height of President Sukarno’s confrontation in Malaysia, UFOs penetrated a well defended area in Java for two weeks at a stretch, and each time were welcomed with perhaps the heaviest anti-aircraft barrage in history.”
Air Commodore J. Salutun, National Aerospace Council of Indonesia, and a Member of the Indonesian Parliament in 1967.
“And don’t tell me they were reflections, I know they were solid objects.”
Lieutenant D. A Swimley, USAF in 1953 following the sighting of 8 UFOs that were confirmed on radar and witnessed numerous other people including commercial pilots and police officers.
“Headquarters wouldn’t let us go after it and we played around a little bit. We got to watching how it made 90 degree turns at this high speed and everything. We knew it wasn’t a missile of any type, so then we confirmed it with the radar control station, and they kept following it, and then it crashed somewhere off between Texas and the Mexico border.”
Colonel Robert Willingham, USAF from an affidavit in the 1970’s when discussing a sighting of a UFO whilst he was navigating an F94 jet on September 6th 1950.
“A saucer flew right over (us), put down three landing gears, and landed out on the dry lakebed. (The cameramen) went out there with their cameras toward the UFO…. I had chance to hold (the film) up to the window. Good close-up shots. There was no doubt in my mind that it was made someplace other than on this earth.”
Colonel Gordon Cooper, Mercury and Gemini Astronaut describing an incident he witnessed during the 1960’s during a videotaped interview for the Disclosure

Program.
“The UFO was bouncing around the 747. (It) was a huge ball with lights
running around it… Well, I’ve been involved in a lot of cover-ups with the FAA. When we gave the presentation to the Reagan staff, they had all those people swear that this never happened. But they never had me swear it never happened. I can tell you what I’ve seen with my own eyes. I’ve got a videotape. I’ve got the voice tape. I’ve got the reports that were filed that will confirm what I’ve been telling you.”
John Callaghan, FAA Chief of Accidents and Investigations during a videotaped interview for the Disclosure program.
“I have frequently been asked why a person of my background—a former Chief of the Defence Staff, a former Chairman of the NATO Military Committee—why I think there is a cover-up (of) the facts about UFOs. I believe governments fear that if they did disclose those facts, people would panic. I don’t believe that at all. There is a serious possibility that we are being visited by people from outer space. It behoves us to find out who they are, where they come from, and what they want.”
Admiral Lord Hill-Norton, British Royal Navy, former Chief of Defence during a videotaped interview for the Disclosure program.
The security guard called and said, “Sir, there’s a glowing red object
hovering right outside the front gate. I’ve got all the men out here with
their weapons drawn.” We lost between 16-18 ICBMs (nuclear tipped Inter Continental Ballistic Missiles) at the same time UFOs were in the area… (A high ranking Air Force officer) said, “Stop the investigation; do no more on this and do not write a final report. I heard that many of the guards that reported the incident were sent off to Vietnam.”
Captain Robert Salas, USAF, during a videotaped interview for the Disclosure program.
“It was the darndest thing I’ve ever seen. It was big, it was very bright, it changed colours, and it was about the size of the moon. We watched it for ten minutes, but none of us could figure out what it was. One thing’s for sure: I’ll never make fun of people who say they’ve seen unidentified flying objects in the sky.”
Former President of the United States, Jimmy Carter following his sighting along with many others of a UFO at Leary, Georgia in October 1969.
“The phenomenon of UFOs is real. I know that there are scientific organisations which study the problem.”
Former Soviet President Mikhail Gorbachev on 26th April 1990.
“This is the first sighting in Zimbabwe where airborne pilots have tried to intercept a UFO. As far as my Air Staff is concerned, we believe implicitly that the unexplained UFOs are from civilizations beyond our planet.”
Air Commodore David Thorne, Director of General Operations for the Zimbabwe Air Force in 1985.
“The Air Force has arrived at the conclusion that a certain number of anomalous phenomena has been produced in Belgian airspace. The numerous testimonies of ground observations….reinforced by the reports of the night March 30-31 (1990) have led us to face the hypothesis that a certain number of unauthorised aerial activities have taken place.
The day will undoubtedly come when the phenomenon will be observed with the technological means of detection and collection that won’t leave a single doubt about its origin. This should lift a part of the veil that has covered the mystery for a long time; a mystery that continues to be present. But it exists, it is real, and that in itself is an important conclusion.”
Colonel Wilfred De Brouwer, Chief of Operations for the Belgian Air Force in 1990 following a spate of sightings over the country witnessed by hundreds of people. Many of the sightings were confirmed on radar.
“It is impossible for any man-made machine to make a sudden appearance in front of a jumbo jet that is flying 910 kilometers per hour and to remain in steady formation paralleling our aircraft. … Honestly, we were simply breathtaken.”
Kenju Terauchi Japan Airlines pilot in 1986.

Before we could do anymore, the army, after conferring with (US) officials, ordered the investigation stopped.”

Dr Paul Santorini regarding UFOs seen over Greece in 1946.

“I have discussed this matter with the effected agencies of the government, and they are of the opinion that is it not wise to publicize this matter at this time.”

Senator Richard Russell, head of the Armed Services Committee, following his sighting of a UFO during an official trip to the Soviet Union in 1955.

“Reliable reports indicate there are objects coming into our atmosphere at very high speeds and controlled by thinking intelligences.”

Navy Admiral Delmar Fahrney in a public statement during 1957.

“Congressional investigations…are still being held on the problem of unidentified flying objects and the problem is one in which there is quite a bit of interest… Since most of the material presented to the committee is classified, the hearings are never printed.”