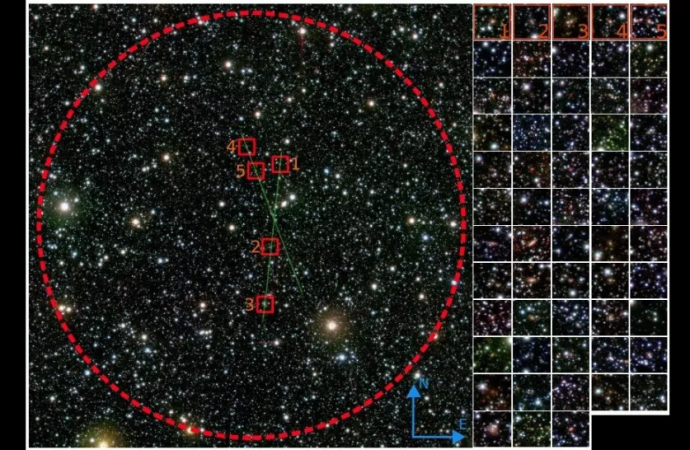 An uncharted region of space known as the “zone of avoidance” lurks behind the Milky Way’s center – and astronomers just found an enormous, multi-galaxy structure there.

Astronomers have detected an enormous extragalactic structure hiding in an uncharted region of space far beyond the Milky Way‘s center.

This phantom region, known as the zone of avoidance, is a blank spot on our map of the universe, comprising somewhere between 10% and 20% of the night sky. The reason we can’t see it — at least with standard visible light telescopes — is because the Milky Way’s bulging center blocks our view of it; the center of our galaxy is so dense with stars, dust and other matter that light from the zone of avoidance gets scattered or absorbed before reaching Earth’s telescopes.

However, researchers have had better luck uncovering the zone’s secrets with telescopes that can detect infrared radiation — a type of energy that’s invisible to human eyes, but powerful enough to shine through dense clouds of gas and dust. Infrared surveys of the zone of avoidance have found evidence of thousands of individual galaxies shining through the cosmic fog, though little is known about the large-scale structures that lurk there.

Now, researchers have combined data from several of those infrared surveys to reveal the most colossal structure ever detected in the zone of avoidance, according to a study published Oct. 28 on the preprint database arXiv.org. (This study has not yet been peer reviewed, though it has been submitted for review to the journal Astronomy and Astrophysics).

Located approximately 3 billion light-years from Earth, the mysterious structure appears to be a large cluster of galaxies drawn together by a shared center of gravity. Using observations from the VVV Survey — a survey that studies the Milky Way’s central bulge at infrared wavelengths using the Visible and Infrared Survey Telescope for Astronomy in Chile — the study authors found evidence of at least 58 galaxies bundled together in a small plot of the zone of avoidance.

Galaxy clusters are the largest gravitationally-bound objects in the universe; the largest known clusters contain hundreds of thousands of galaxies bunched together. Unfortunately, it’s impossible to tell just how wide or massive the newly discovered cluster is, given the vast distances and myriad obstructions sitting between the cluster’s stars and Earth.

However, the mere detection of this colossal object shows that the zone of avoidance may not be as inscrutable as was once thought. Future infrared studies — including potential observations by the James Webb Space Telescope, which has already used its infrared camera to take the deepest image of the universe to date — should further help scientists unlock the hidden secrets beyond the Milky Way’s bulge.