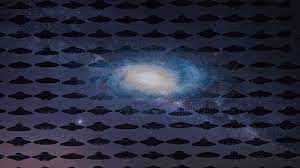 Five years ago a very strange object—maybe a thousand feet long, oblong, shiny and fast—streaked across space, tens of millions of miles from Earth. Its course and speed indicated it had come from outside the solar system. A visitor from another star.

Astronomers dubbed the thing ‘Oumuamua—Hawaiian for “scout”—and started arguing about it.

On one side are an overwhelming majority of scientists who don’t know what ‘Oumuamua is, but aren’t willing to speculate as to what it might be.

On the other side, are a much smaller camp led by Harvard astronomer Avi Loeb, who argues that we should at least consider the possibility that ‘Oumuamua is an alien spacecraft.

Now Loeb is asking the next logical question. How many other ‘Oumuamuas could there be in and around the solar system? In a new study that appeared online on Sept. 22 and hasn’t yet been peer-reviewed, Loeb and his coauthor Carson Ezell, also a Harvard astronomer, concluded there are as many as 4,000,000,000,000,000,000 (or 4 quintillion) of them.

Each is a visitor from another star, and each, possibly, artificially created.

That might seem like a lot. But the solar system is vast. And the space between our star system and our closest neighbor, Proxima Centauri, is even more vast. Actually finding any of those 4 quintillion possible mysterious objects for closer study could be really, really hard.

To be clear, Loeb isn’t claiming there are quintillions of alien craft zooming around our corner of the Milky Way. After all, he’s never said that ‘Oumuamua is definitelya robotic probe or crewed craft—just that we should be open to the possibility.

The math is simple. “One can use recent rates of detection of interstellar objects and known capabilities to estimate the density of similar objects in the solar neighborhood,” Loeb and Ezell wrote.

They started with all the objects astronomers have detected that have come from outside the solar system. These are objects that, in other words, could have originated with or near an alien civilization just beyond the sight of our probes and telescopes.

That’s four interstellar visitors in eight years. Loeb and Ezell factored in just how much of the galaxy we can observe with our instruments—which is not much—in order to arrive at an estimate of how many more objects like ‘Oumuamua might be out there in the darkness, having arrived from a neighboring star system.

“Each one a possible alien craft, if you share Loeb’s open-mindedness.”

The lower number, 4 quintillion, is for objects that seem to be directed toward the “habitable zone” of the solar system, close to the sun. That’s where Earth orbits, and where astronomers have some chance of spotting a passing object.

That lower number is the exciting one, and not just because the closer objects are much easier to detect. They’re also the objects that are most likely to be extraterrestrial craft. After all, they seem to be aimed in our direction. They’re objects with a purpose.

But even Loeb isn’t proposing there are 4 quintillion objects exactly like ‘Oumuamua. That object is notable not just for its apparent origin, but also for its size. It’s big enough to be a very large, crewed spacecraft. Judging from the interstellar comets we’ve detected, there’s a good chance that most of the interstellar objects in the habitable zone around the Sun are tiny—likely no bigger than 3 feet across. There are probably a million of the latter for every single ‘Oumuamua-size object, Loeb explained.

That still leaves a lot of potential ‘Oumuamuas out there, somewhere in the habitable zone of the solar system. Each one a possible alien craft, if you share Loeb’s open-mindedness.

But actually pinpointing these objects, not to mention closely inspecting them, is extremelydifficult. It’s so difficult that a close encounter with a passing alien craft is the least likely way we’ll make first contact with extraterrestrials, according to Edward Schwieterman, an astrobiologist at the University of California, Riverside.

“In my view, we are much more likely to detect life that originates outside of our solar system through remote observation than by physical encounters,” Schwieterman told The Daily Beast.

We got lucky with ‘Oumuamua. It’s really big, really shiny, and it passed around 21 million miles from Earth.

But the solar system is more than 9 billion miles across. And it’s another 20 trillion miles to Proxima Centauri. Small and very far away, most interstellar objects—even the ones crossing the habitable zone—will be a lot more difficult to find than ‘Oumuamua. “Space debris is hard to see from far away,” Seth Shostak, an astronomer with the California-based SETI Institute, told The Daily Beast.

We’re getting better at it, though. New telescopes including NASA’s James Webb Space Telescope help us look farther into the darkness of the outer solar system, find ever-smaller objects, and separate the local stuff from possible interstellar visitors.

Loeb also highlighted the Vera C. Rubin Observatory that’s under construction in Chile. Set to open in 2023, the observatory with its 3.2-billion-pixel camera should be able to survey the entire southern sky every four days. “A high-resolution image could reveal bolts and screws on the surface of an artificial object and distinguish it from a nitrogen iceberg, a hydrogen iceberg or a dust bunny,” Loeb said.

‘Oumuamua was a missed opportunity. Sure, Loeb is open to the idea it’s an alien probe, but most astronomers aren’t. If we can get a closer look at the next ‘Oumuamua, maybe more scientists will come around to the idea it might be an alien craft.

In theory, we’ve got 4 quintillion opportunities.