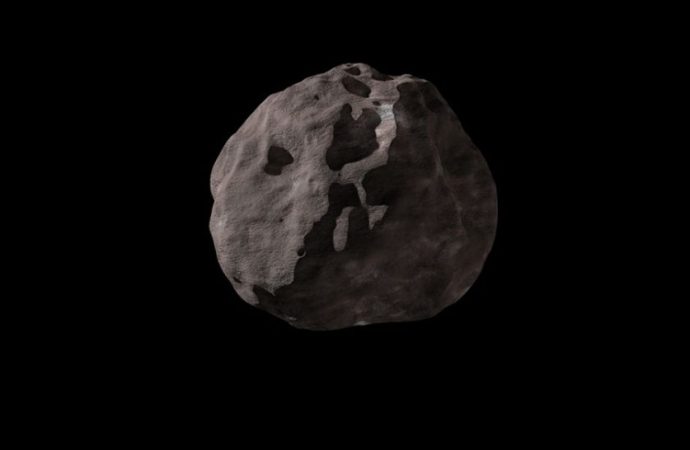 The tiny natural satellite was found orbiting an asteroid.

Astronomers may have detected a previously undiscovered “mini-moon” in the solar system: a rocky object orbiting a small asteroid near Jupiter. If the rocky satellite, which is just a little wider than the width of Manhattan, is confirmed to be a proper moon, it would be one of the smallest moons ever spotted.

The tiny satellite was discovered by scientists working on NASA’s Lucy mission, which is sending a space probe to study some of the Trojan asteroids, two massive groups of space rocks that are located on each side of Jupiter on its orbit around the sun.

The Lucy probe was launched on Oct. 16, 2021, and will arrive at the Trojan asteroids in late 2027, after making a quick stop in the asteroid belt between Mars and Jupiter. Until then, Lucy mission scientists are trying to learn more about some of these mysterious rocks to help identify where the probe can be most useful.

On March 27, the smallest of Lucy’s Trojan targets, known as Polymele, passed in front of a distant star, allowing mission scientists to accurately measure the space rock’s size by observing how much of the star’s light the asteroid blocked out as it whizzed past. However, the team also observed an unexpected subsequent, smaller blip as a second asteroid followed in Polymele’s wake.

After reviewing the data, the team concluded that the second blip “had to be a satellite,” lead researcher Marc Buie, an astronomer at the Southwest Research Institute in Boulder, Colorado, said in a NASA statement.

The newly discovered satellite has a diameter of about 3 miles (5 kilometers) and is separated from the 17-mile-wide (27 km) Polymele by a distance of around 125 miles (201 km). At the time of the observation, Polymele was around 480 million miles (772 million km) from Earth.

“Those distances are roughly equivalent to finding a quarter on a sidewalk in Los Angeles while trying to spot it from a skyscraper in Manhattan,” NASA representatives wrote in the statement.

The term “moon” can refer to any naturally occurring solid body that orbits a planet, dwarf planet or asteroid. More than 200 moons have been recognized in the solar system (not including asteroid moons), but the actual number is likely much higher, according to NASA.

The researchers could make only fleeting observations of Polymele’s satellite, so its orbital path is highly uncertain. As a result, the space rock cannot yet be officially designated as a moon or be properly named. But the researchers are confident that when the Lucy probe arrives at Polymele, the spacecraft will be able to collect sufficient data to designate it as a true moon.

This is not the first time that Lucy mission scientists have spotted a satellite trailing a Trojan asteroid. In 2021, the team detected a 0.6-mile-wide (1 km) satellite orbiting Eurybates, which will be Lucy’s first Trojan target, after analyzing data collected by NASA’s Hubble Space Telescope, according to Live Science’s sister site Space.com. On this occasion, the researchers determined the moon’s orbital path and officially named it Queta.