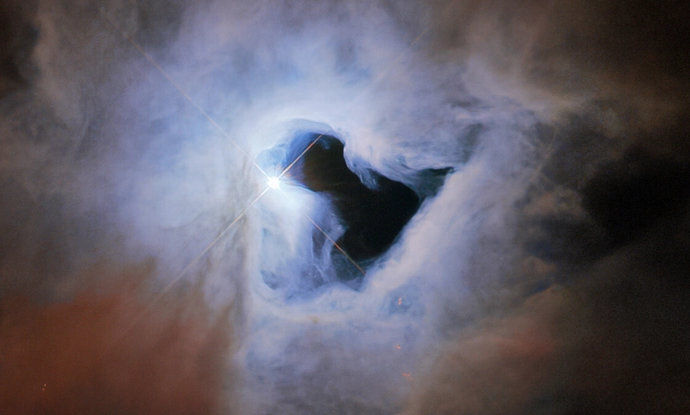 When it comes to dramatic and awe-inspiring pictures of space, few can contend with what appears to be a pic of, well, nothing at all: a fascinating image of what seems to be a hole in the fabric of space, taken by the NASA/ESA Hubble Space Telescope.

Described as a “cosmic keyhole” by experts, the phenomenon caught by the telescope is what’s known as a reflection nebula – part of the debris left behind by the formation of a newborn star, or in this case, a small, multiple star system known as V380 Orionis in the constellation Orion.

The ghostly celestial object you see here, named NGC 1999, is around 1,350 light-years from our planet; not far from the Orion Nebula – a star factory of significant size that happens to be the closest of its kind to Earth.

That gap in the middle of the reflection nebula really is an empty part of space, though astronomers initially thought it might be a Bok globule: a dense and cold cloud, made up of gas, molecules, and dust, which appears to block out background light.

Surrounding the hole we can see a cloud of dust reflecting the light from the V380 Orionis star, which is visible close to the center of the cosmic keyhole. That’s where the reflection nebula name comes from, nebula meaning “cloud” or “mist” in Latin.

The space agencies describe it as “like a fog curling around a street lamp”, but at this point the reason for the gigantic gap in the middle of the cloud is unknown. However, were we filming a sci-fi movie, we might say it’s the perfect opening for aliens to arrive through – or an ideal spot to place a portal to another Universe.

Having first been captured by the Wide Field Planetary Camera 2 on Hubble in 1999, the picture was subject to follow-up observations from telescopes including the ESA’s Herschel Space Observatory. The final image and the story behind it is really a group effort from numerous instruments.

Hubble has been capturing the stars and galaxies around us for more than 30 years now, and is still going strong. We’ve recently seen it take a beautiful closeup of the Orion Nebula, and a shot of a strange galaxy ‘mirror’ created by gravitational lensing.

Of course the telescope is about much more than pretty pictures – it’s been helping scientists deepen their understanding of the Universe too, whether that’s in discovering new asteroids or predicting the death of the Sun.

You can see more images from Hubble at the ESA Hubble website.