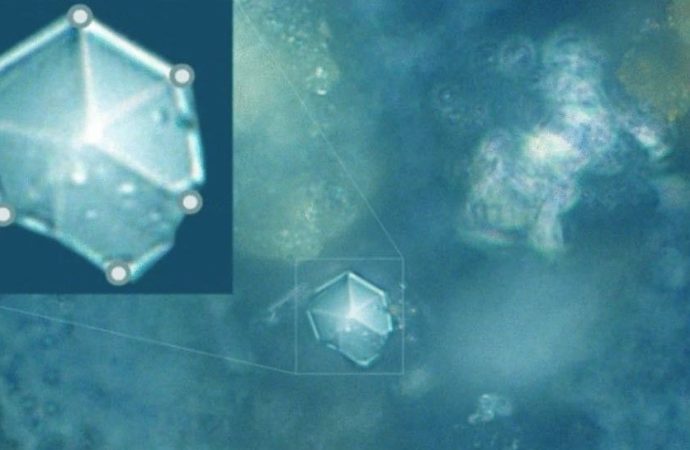 The dust was perfectly preserved between two layers of snow.

Researchers have discovered never-before-seen types of crystal hidden in tiny grains of perfectly preserved meteorite dust. The dust was left behind by a massive space rock that exploded over Chelyabinsk, Russia, nine years ago.

On Feb. 15, 2013, an asteroid measuring 59 feet (18 meters) across and weighing 12,125 tons (11,000 metric tons) entered Earth‘s atmosphere at around 41,600 mph (66,950 km/h). Fortunately, the meteor exploded around 14.5 miles (23.3 kilometers) above the city of Chelyabinsk in southern Russia, showering the surrounding area in tiny meteorites and avoiding a colossal single collision with the surface. Experts at the time described the event as a major wake-up call to the dangers asteroids pose to the planet.

The Chelyabinsk meteor explosion was the largest of its kind to occur in Earth’s atmosphere since the 1908 Tunguska event. It exploded with a force 30 times greater than the atomic bomb that rocked Hiroshima, according to NASA. Video footage of the event showed the space rock burning up in a flash of light that was briefly brighter than the sun, before creating a powerful sonic boom that broke glass, damaged buildings and injured around 1,200 people in the city below, according to Live Science’s sister site Space.com.

In a new study, researchers anlyzed some of the tiny fragments of space rock that were left behind after the meteor exploded, known as meteorite dust. Normally, meteors produce a small amount of dust as they burn up, but the tiny grains are lost to scientists because they are either too small to find, scattered by the wind, fall into water or are contaminated by the environment. However, after the Chelyabinsk meteor exploded, a massive plume of dust hung in the atmosphere for more than four days before eventually raining down on Earth’s surface, according to NASA. And luckily, layers of snow that fell shortly before and after the event trapped and preserved some dust samples until scientists could recover them shortly after.

The researchers stumbled upon the new types of crystal while they were examining specks of the dust under a standard microscope. One of these tiny structures, which was only just big enough to see under the microscope, was fortuitously in focus right at the center of one of the slides when one team member peered through the eyepiece. If it had been anywhere else the team would likely have missed it, according to Sci-News.

After analyzing the dust with more powerful electron microscopes, the researchers found many more of these crystals and examined them in much greater detail. However, even then, “finding the crystals using an electron microscope was rather challenging due to their small size,” the researchers wrote in their paper, which was published May 7 in The European Physical Journal Plus.

The new crystals came in two distinct shapes; quasi-spherical, or “almost spherical,” shells and hexagonal rods, both of which were “unique morphological peculiarities,” the researchers wrote in the study.

Further analysis using X-rays revealed that the crystals were made of layers of graphite — a form of carbon made from overlapping sheets of atoms, commonly used in pencils  — surrounding a central nanocluster at the heart of the crystal. The researchers propose that the most likely candidates for these nanoclusters are buckminsterfullerene (C60), a cage-like ball of carbon atoms, or polyhexacyclooctadecane (C18H12), a molecule made from carbon and hydrogen.

The team suspects that the crystals formed in the high-temperature and high-pressure conditions created by the meteor breaking apart, although the exact mechanism is still unclear. In the future, the scientists hope to track down other samples of meteorite dust from other space rocks to see if these crystals are a common byproduct of meteor break-ups or are unique to the Chelyabinsk meteor explosion.