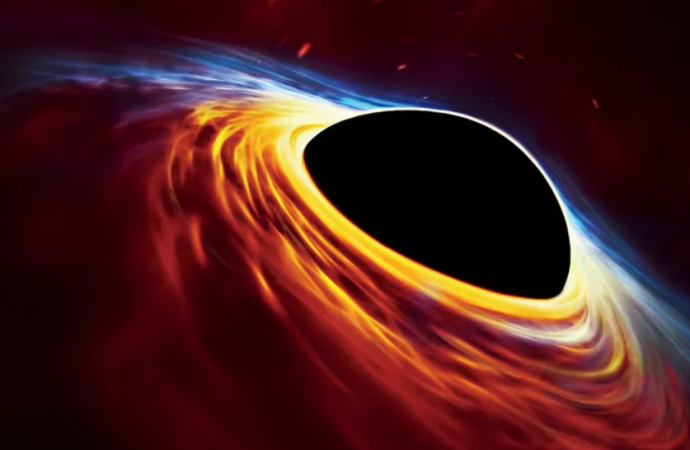 This behemoth has been powering an ultrabright quasar for 9 billion years.

The fastest-growing black hole ever seen is swallowing the mass equivalent of an entire Earth every second.

This gargantuan black hole has a mass 3 billion times that of the sun, and its rapid consumption is causing the behemoth to grow rapidly, an international research team found. The black hole gorges via a process called accretion, in which it siphons matter from a thin disk of gas and dust rotating around the massive object.

Other black holes of a similar size stopped growing billions of years ago, but this newly discovered black hole is still getting larger. It’s now 500 times bigger than Sagittarius A*,   the supermassive black hole at the heart of the Milky Way,  and would fit the whole solar system behind its event horizon, the boundary beyond which nothing can escape.

Based on this information, the researchers determined that the newfound black hole is the most rapidly growing black hole found to exist in the past 9 billion years.

“Now, we want to know why this one is different  —  did something catastrophic happen?” lead researcher Christopher Onken, a researcher at the Research School of Astronomy and Astrophysics at the Australian National University (ANU), said in a statement(opens in new tab). “Perhaps two big galaxies crashed into each other, funneling a whole lot of material onto the black hole to feed it.”

This rapid accretion of matter to the surface of the black hole has also resulted in a quasar blasting out enough energy to make it 7,000 times brighter than the light from every star in the Milky Way. In fact, this quasar  (designated SMSS J114447.77- 430859.3)  is also the most luminous of these events for around the past two-thirds of the universe’s 13.8 billion-year existence.

The quasar has a brightness  of magnitude 14.5 when viewed from Earth, meaning it is only slightly dimmer than Pluto and bright enough to potentially be spotted by skywatchers with good telescopes in a very dark area.

The discovery of the feeding black hole was made as part of the SkyMapper Southern Sky Survey, conducted by the 1.3-meter (4.3 feet) telescope at Siding Spring Observatory in Australia.

Despite the quasar’s incredible brightness, Onken and his team still described the finding as a “very large, unexpected needle in the haystack.”

“Astronomers have been hunting for objects like this for more than 50 years,” Onken said. “They have found thousands of fainter ones, but this astonishingly bright one had slipped through unnoticed.”

Christian Wolf, an associate professor at ANU and a member of the research team, said that he thinks astronomers are unlikely to find another black hole growing at this rate or powering a quasar of this magnitude or greater.

“We have essentially run out of sky where objects like this could be hiding,” Wolf said. “We are fairly confident this record will not be broken.”

A paper detailing the discovery has been submitted to the journal Publications of the Astronomical Society of Australia but has not yet been peer reviewed. A preprint version is available via the arXiv database.