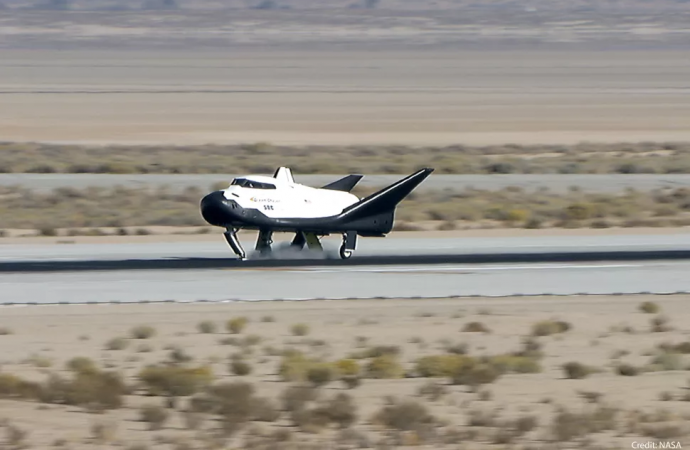 The private spacecraft could be flying cargo missions to the space station as soon as 2023.

Cargo missions returning from the International Space Station are now authorized to touch down in the Cotton State.

The U.S. Federal Aviation Administration (FAA) just issued a license allowing the Huntsville International Airport in Alabama to accept landings from Sierra Space’s Dream Chaser space plane when the vehicle starts flying. That said, Sierra Space (or any other provider) will still need a vehicle operator license before reentering over the airport, FAA officials noted.

Documents previously submitted to the FAA(opens in new tab) for the environmental review suggest that Sierra Space is targeting 2023 for its landings at the Alabama facility.

“The license permits the airport to offer its site for Sierra Space Dream Chaser vehicles returning to Earth from future NASA resupply missions to the International Space Station. The reentry site operator license is valid for five years,” the FAA stated(opens in new tab) on Friday (May 13).

“The FAA license evaluation process involved environmental and safety reviews,” FAA officials added. “In addition, the FAA will work with the airport to develop the necessary notifications and other procedures for safely and efficiently integrating commercial space reentries into its operations.”

Sierra Nevada has a contract with NASA to fly at least six uncrewed cargo missions to and from the ISS with Dream Chaser. The flights will lift off on United Launch Alliance Vulcan Centaur rockets from Florida’s Cape Canaveral Space Force Station.

In 2021, Sierra Nevada announced that the cargo version of Dream Chaser would land on NASA’s former space shuttle runway at the Launch and Landing Facility, at the agency’s Kennedy Space Center in Florida. The company is also considering landings in Japan, according to a recent SpaceNews report, and said it plans to send its first mission aloft in 2023.

Sierra Nevada first envisioned Dream Chaser as a crew vehicle and targeted ISS astronaut flights for this version. That said, NASA eventually selected SpaceX and Boeing to carry crews to and from the ISS. Sierra Nevada has not ruled out building a crewed version of the space plane.

Two companies — SpaceX and Northrop Grumman — already fly robotic cargo missions to the orbiting lab for NASA. SpaceX uses the robotic version of its Dragon capsule, which can return experiments to Earth, while Northrop Grumman’s Cygnus spacecraft burn up in the atmosphere during re-entry.