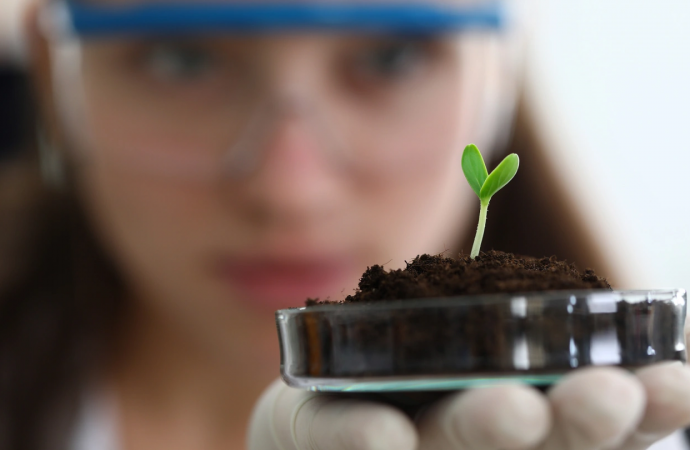 A new study says that growing plants on the Moon is possible. But it causes a massive amount of stress on the plants. The researchers published their findings in Communications Biology. It’s the first study to show success at growing plants in lunar soil returned from the Apollo missions all those years ago.

Because of the level of stress that the plants experience, scientists say farming on the Moon isn’t happening anytime soon.

Plants can grow on the Moon

One of NASA’s biggest pushes right now is to put humans back on the Moon. The space agency is already working with some companies to create new lunar rovers, and it is already sending a spacecraft around the Moon later this year.

But, if we ever want to progress to the point of living on the Moon, we have to be able to provide for the people who live there.

This is why scientists have spent countless hours, days, and even years trying to grow plants in lunar soil. But now that we’ve proven that plants can grow on the Moon, we have to tackle another difficult issue. Making that growth easier on the plants.

It might sound silly to worry about how much stress a plant is taking on. But, it’s actually a very serious issue. Even when talking about potted plants in your home, there are ways you can stress them out. This stress can then lead to weaker growth and other issues with the plant. If we’re going to use terrestrial life to help generate life support and food on the Moon, we need to get those stress levels down.

Still, even taking this first step is absolutely astounding. The soil on the Moon is nothing like the soil that you can find on Earth. It’s sharper, more abrasive, and doesn’t contain any organic elements.

Further, there are certain chemical states in lunar soil that you just won’t find in our own planet’s soils. And that doesn’t even cover the weak atmosphere and radiation that constantly bombards our Moon.

So yes, while it does seem possible to grow plants on the Moon, there’s still a lot of legwork to do before we send our favorite plants to occupy the lunar surface. The researchers say that the plants grew, but they didn’t do fantastically well. There were signs of low volume, slow growth, and even some discoloration. All of which are signs that the plant is extremely stressed.

So, before we go planting things on the Moon, we’re going to need to do more research. Especially if we want to be able to grow plants in locally sourced soils. Otherwise, we’ll need to find ways to move thousands and thousands of pounds of Earth’s soil to the lunar surface. Which would be costly and time-consuming.

But growing plants on the Moon is a noble idea and one that just makes sense in the grand scheme. Plants provide oxygen, which could be used to help create atmospheres that are breathable within lunar colonies. Further, plants can provide food for astronauts and colonists living on the Moon.

This would help cut down on expenditures of bringing food and oxygen from Earth to those lunar colonies.

Still, we’re a long way off. This new research is a huge step in the right direction, no doubt. And it will be intriguing to see where scientists take these attempts next. Perhaps, if we’re lucky enough, they’ll find a way to reliably grow plants on the Moon without overstressing the plants sometime in the future. If not, space colonization is going to be a terribly expensive endeavor.