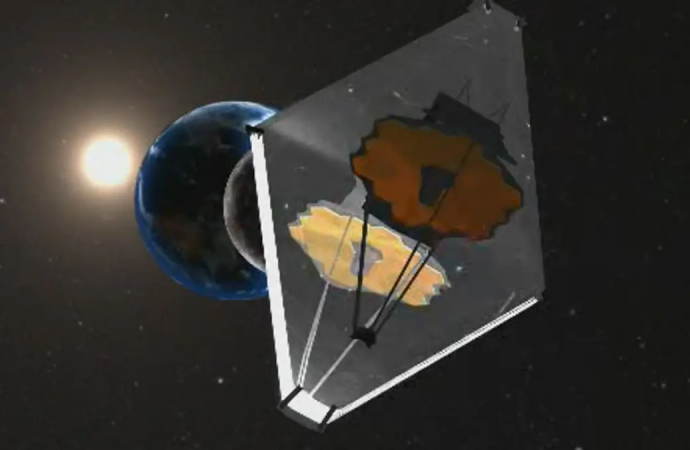 The James Webb Space Telescope (JWST) has passed its first assignment with flying colours, after it handed in a spectacular photo to NASA.

On Wednesday, officials at the space agency shared a stunning photo of a star captured by the telescope during its alignment process, in which several in-focus galaxies and distant stars can be seen in the background.

The Webb’s primary mirror is made up of an array of 18 individual mirrors that, once properly aligned, will act as a single mirror.

And even though that self-alignment is still in the works, researchers said they were blown away by the test images already being captured by the fledgling telescope.

“The images are focused together as finely as the laws of physics allow,” Marshall Perrin, Webb deputy telescope scientist at the Space Telescope Science Institute in Baltimore, told CNN.

“But as we were focusing on those bright stars, we couldn’t help but see the rest of the universe coming into focus behind them, to see the more distant stars and galaxies coming into view.”

“We said last fall that we would know that the telescope is working properly when we have an image of a star that looks like a star,” Lee Feinberg, Webb optical telescope element manager at NASA’s Goddard Space Flight Center, told Cosmos magazine.

“Now you’re seeing that image. And I’m happy to say that the optical performance of the telescope is absolutely phenomenal, it is really working extremely well. The performance is as good if not better than our most optimistic prediction.”

Astronomer Phil Plait shared some images to Twitter, comparing the JWST image to previous images of the same star captured by other satellites.

The JWST is the successor to the Hubble Space Telescope, which has not only provided stunning images, but has also been vital in providing scientific knowledge about our universe and its origins.

The $10-billion JWST has a much larger primary mirror than Hubble (2.7 times larger in diameter, or about six times larger in area), giving it more light-gathering power and greatly improved sensitivity over the Hubble.

The telescope was launched into space on Christmas Day last year, and teams held their breath as there were worries the unfurling of its many parts might not go to plan.

The JWST launched, and there were no second chances — its extremely distant location in the solar system makes it impossible for human crews to work on.

But the telescope’s massive sunshield, with it 107 restraints holding it in place, was released correctly and everything has gone according to plan, so far.

Once fully operational, scientists believe the telescope will be able to peer back in time, possibly to 100 million years after the Big Bang. And not only do scientists think they can look back into galaxies from that time, but they also think they might be able to determine the composition of those galaxies.

According to NASA, the alignment process is expected to be complete by early May at the latest.