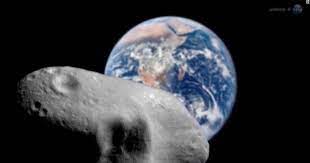 It was “probably a once-in-a-lifetime” moment for the asteroid hunter.

This weekend, an astronomer spotted a small asteroid just hours before the space rock crashed into Earth’s atmosphere and met its fiery demise.

On Friday (March 11), astronomer Krisztián Sárneczky was observing the sky at the Piszkésteto Mountain Station, which is part of the Konkoly Observatory near Budapest in Hungary. During his observations, he spotted an asteroid, now dubbed 2022 EB5 by the Minor Planet Center. Scientists estimate that the space rock was about 10 feet (3 meters) wide (no big deal for an asteroid).

But the sighting soon got a lot more interesting: Just 30 minutes after the discovery, data showed that the space rock was a mere two hours away from colliding with Earth’s atmosphere.

This is “probably a once in a lifetime” experience for an “asteroid hunter,” Sárneczky told Space.com. Sárneczky has been searching regularly for near-Earth asteroids at Piszkésteto since August 2020, he told Space.com.

2022 EB5 looked like “a star-like, fast-moving object shifting against the background stars. Like a normal near-Earth asteroid,” Sárneczky said, additionally sharing that this was the 64th near-Earth object he had discovered.

Experts believe the space rock burned up in our atmosphere, creating a bright meteor often referred to as a fireball, or shooting star, in the sky. Because of the asteroid’s small size, it is highly unlikely that the space rock survived the journey. Most likely, it completely burned up in Earth’s atmosphere and at this time, no resulting meteorite has been found.

According to amateur astronomer and orbital simulation expert Tony Dunn, the discovery of 2022 EB5 before its collision was a rare event.

“Impact! When 2022 EB5 struck the Earth north of Iceland this morning, it became the 5th asteroid to be discovered prior to impacting Earth,” Dunn tweeted along with an animated simulation of the asteroid crashing into our planet.

There have been a few reports of people in Iceland who claim to have seen a bright flash of light that could have coincided with the meteor impact, according to Earthsky.org. However, there has been no conclusive visual or video detections of the fireball, “likely due to the remoteness of the impact location,” according to a statement from the European Space Agency.

Still, thanks to data from an international network of infrasound detectors, there is independent evidence of the asteroid’s impact. With these detectors, signals from the impact were observed from both Iceland and Greenland, according to the ESA statement.